The Beretta Nano is a subcompact semiauto chambered in 9mm. I obtained one from Beretta last month for a T&E, and I’ve recorded my impressions below.

The Nano is small, with a long double-action-type trigger pull. It’s thin, lightweight, has no protruding edges and has all of one external operating control: the magazine release (two if you include the trigger-drop safety). This release is 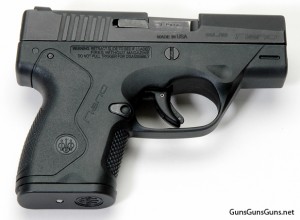 The author’s Nano from the right.

user-reversible, with instructions on doing so in the owner’s manual.

The magazine holds six rounds. Two six-round metal magazines with removable and extended base plates and five cartridge inspection holes on either side come with the gun.

The Nano frame, according to Beretta, is made of Technopolymer, a term of art for the fiberglass-impregnated resin material used for this part. Other modern pocket pistols use formula variations of this material, including Glock, Smith & Wesson, Heckler & Koch and Walther, to name but a few. Obviously, this material is well-established as quite durable, as is the Beretta PRONOX metal finish treatment of the slide and barrel, with a blued over-finish. PRONOX is a variation of the melonite and tenifer metal treatments. These latter two processes are used by other prominent handgun manufacturers and have become known for their excellent protection against the elements and abuse.

The Nano’s front strap and backstrap feature impressed checkering, while the rear area of the grip offers a very lightly coarsened surface. Matching depressions forward on the frame past the trigger guard opening serve as finger placement indicators when handling the pistol. The frame slopes inward and down behind the trigger guard. At the top right-rear of the frame you’ll find the striker deactivation button. The disassembly pin is located forward and directly above the trigger guard (more on these later). 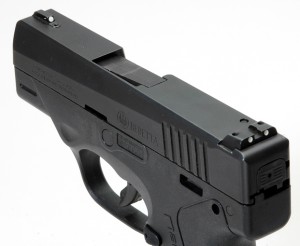 The stainless steel chassis is held in the frame by two cross pins. Detailed instructions and photos of how to remove the chassis from the frame, along with photos of the chassis itself, are in the owner’s manual.Beretta compacts the operating controls, including the trigger, into one unit termed the chassis; this is the serialized portion of the pistol. This unit is removable, but a witness opening in the top left side of the pistol allows you to see the serial number without disassembly.

The beauty of this chassis system (versions of which have also been employed by other manufacturers) is the frame can be replaced with another frame size, allowing users to have both a highly-concealable handgun and a larger version if the owner wants or needs change. It also enables a more thorough cleaning if the you wish.

Nano specifications include the following: It’s striker-fired with no external hammer and has three-dot sights held in dovetail cuts and additionally secured with allen screws. The rear sight is adjustable for horizontal sighting corrections. Beretta suggests using a 1.3mm hex wrench. On my sample Nano, I had to soak the screws for an hour with Liquid Wrench before I could loosen them. After doing so, I used a non-marring punch and light hammer to make the adjustment needed (the gun shot a bit left for me at 12 yards). The magazine catch is at the lower left rear of the larger trigger guard and is reversible. 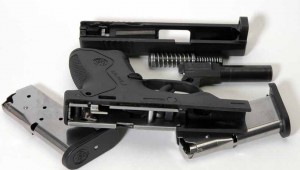 The Nano measures 5.63″ long, .9″ wide and 4.17″ tall. It’s barrel measures 3.07″ long, and it weighs 17.67 oz. (unloaded). The trigger pull on my sample broke at 7.75 lbs. or 8 lbs. depending on where I placed the trigger pull gauge arm on the face of the curved trigger. The trigger features a centered drop safety that protrudes from the trigger face. The safety reflexively disengages when you depress it with a complete pull of the trigger.

A large external extractor is at the center right-rear of the ejection port, and six diagonal grasping grooves are cut into the rear of the tapered slide. The forward face of the captive dual recoil spring is visible in the front face of the slide when the slide is forward.

The Nano has no external slide catch. If you want to lock the slide back, you must use an empty magazine. To release the slide, give it a slight rearward tug.

Note: I’ve read elsewhere that this lack of an external slide stop is a serous negative. I suppose this would then be equally correct with the Walther line of PP pistols made since the 1920s, which also lack this part. You can, however, move the internal part by reaching into the ejection port with a finger and pulling up on the internal activating stud of the stop. (Similar lifting of the slide stop/ejector piece works with the Walther PP series as well.) So, you can do it, but I think it’s not worth the pain to learn because here the slide works against a much stronger recoil spring than that found in the Walthers. To beat on this subject a bit more, I think the odds of inadvertently bumping a slide stop upward with such a small pistol while firing it are high enough that you could almost view the lack of one as a safety feature.

How to Take It Apart 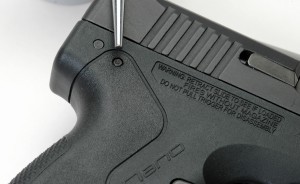 Disassembly is as follows. The striker may well be cocked, so you must lower it to remove the slide, but you don’t have to fire the pistol to do so. Simply push inward on the striker deactivation button on the frame with a marrow pin or the tip of a ball point pen.

After releasing the striker, use a coin, cartridge case rim or other such tool to rotate the disassembly pin one quarter turn counter clockwise; you then can move the slide assembly forward off of the frame. (You don’t need to remove the disassembly pin from the frame.) You can lift the captive dual recoil spring out, and the barrel. Re-assemble in reverse order. 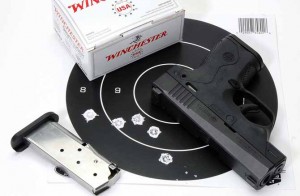 I found the Nano comfortable to shoot. It’s stone reliable and as accurate (or not) as you are able to manipulate the faux double-action trigger that, for me, feels as good as, or better than, most modern double-action pocket revolvers.

The grip angle and the impressed checkering both helped keep the pistol seated in my hand when quickly firing multiple shots. I had two friends also shoot the Nano and none complained about its two-finger grip. I did, however, find one shooter who fired a Nano at a trade show and said the gun literally was jumping out of her hand with every shot. She’s an experienced, long-time action pistol competitor, but the Nano grip design is simply not for her. Actually, her experience highlights the advantages of trying before buying, if at all possible.

At the Lower Providence Rod and Gun Club Range in Oaks, Pa., my friends Irv Gill and Joe Mulligan helped get some rounds downrange against Birchwood-Casey Shoot-N-See bulls-eye and Warren IDPA training targets. I performed accuracy work while seated, using our shooting bench as a rest. After acclimating myself to the Nano’s long trigger pull, I managed to shoot a few five-shot groups of less than 3″, with one group of five shots at 15 yards measuring 2.0″. Not surprisingly, the more I shot the gun, the better the results.

Here are my chronograph results with the Nano, which I obtained using a Master Gamma Chrony chronograph at 300 feet above sea level with an ambient temperature of 65 degrees F. The five-shot averages:

Gill and Mulligan opted for free-style ventilation of the Warren targets. Mulligan found the magazine’s extended base plate caught on part of his shooting hand when loading, which went along with my finding yet again that my normal two-handed shooting grip doesn’t work with a little pocket semiauto because my shooting finger eventually winds up digging into my support hand. Gill was a bit more non-committal because he favors revolvers for most any application, but he did say the gun handled well and was accurate.

Beretta offers concealment holsters, but they didn’t make the shipment with my sample gun. However, I did find the Nano fit in a DeSantis Nemesis pocket holster for the Kahr Arms CM9, and it concealed well in chinos and cargo pants pockets.

The Beretta Nano pocket pistol is all business. In short, it’s a purposely Plain Jane pocket pistol. It doesn’t stand above others of its kind—others are smaller, lighter or hold more ammo. But it is small, light, accurate and reliable. It holds enough 9mm ammo for self defense, and does so at a reasonable price. Finally, the Nano is made by a company with a 500-year history of quality firearms manufacture, and that is reflected here. Experience and longevity do matter. 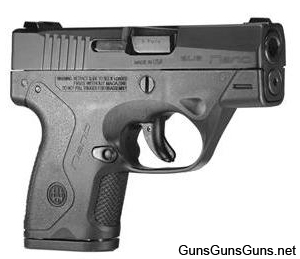 The author’s Nano from the right. 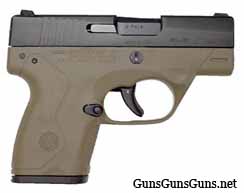 The Nano with the flat dark earth colored frame.