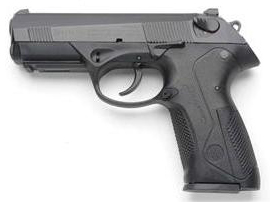 The PX4 Storm from the left.

One of the more unique features of the Px4 is the rotating barrel that keeps the bore in alignment with the target at all times. Instead of dropping out of the way like many barrel designs, the Px4 Storm barrel rotates as the slide moves to the rear, which unlocks the action. This design reduces friction between the barrel and slide, increasing the smoothness of the firing operation. This also helps keep the bore axis low over the shooting hand, which gives the Px4 better pointing capability as well as helps get the gun back on target more quickly for faster follow-up shots.

The polymer frame helps keep the Storm’s weight to 27 oz. The front and back straps offer the same fish-scale checkering as the 90-Two. The grip is considerably trimmer than the 90-Two, and when you install the small back strap, a shooter with the smallest of hands can use the gun. The magazine release button is totally reversible, making this gun totally ambidextrous, with the exception of the slide-stop lever. 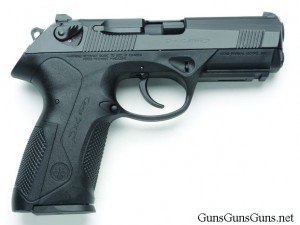 The PX4 Storm from the right.

The dust cover of the polymer frame has a rail built in so that you can easily mount white lights and laser sights on the gun. The rounded trigger guard, forward-cocking serrations and tapered sights give the pistol a very sleek appearance. The sights are of the standard three-dot variety, but are coated with Luminova photo-sensitive material that gives the dots a glowing capability five times as bright as tritium for about 30 minutes after exposure to any light source. The dots remain usable in low light for hours, and only need another brief exposure to regenerate.

The slide is treated with Beretta’s Bruniton non-reflective black coating.

Update: Beretta has released an Inox model, which features a slide bead-blasted into a smooth, satin stainless finish. The Inox is available in 9mm and .40 SW. 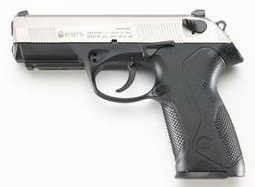 The double-action-only trigger of the Px4 Storm is very smooth with an easy-to-use first-trigger weight of 8 lbs. Subsequent trigger pulls require a full release of the trigger to reset, which I found to be a bit disconcerting when trying to shoot fast. On several occasions, I short-stroked the trigger, failing to reset the sear, which does not deactivate the gun but does require another release of the trigger to pick up the hammer-sear engagement. This would slow your rate of fire, and could be a problem in a close-quarter confrontation where fast, accurate shots are needed to end the fight. This is not an indictment of the gun, but merely an observation, and it’s a concern you can solve with proper training.

The Px4 Storm proved both accurate and reliable. Like the 90-Two, the Px4 went through 300 rounds of .40 SW hollow points without a hiccup. It was also capable of holding all rounds inside a 3″-circle at 15 yards when fired from an unsupported, hand-held stance.

If the Px4 possessed a shorter trigger reset, I would carry it as my personal sidearm—I liked it that much.