Rating: 7.0/10.
Users’ Rating (Click a star to rate this gun.)
Rating: 6.3/10. From 606 votes.
Please wait...
Summary: Walt Rauch’s review of and rating for the Bersa Thunder 380, including a description, range report, specs, photo, MSRP, the average user rating and user comments. (Click here to see all of Rauch’s handgun reviews.) 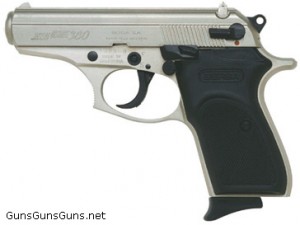 The Bersa Thunder 380 double-action semiauto is chambered in .380 ACP. Manufactured in Argentina, the Bersa externally and partially internally resembles the Walther PP or PPK double-action pistols. The trigger mechanism is an amalgam of the Walther and the Beretta 92 designs. This compact pocket semiauto is what is commonly known as DAO; that is to say, the first shot can be fired as if it were a revolver, with a long, double-action pull on the trigger. Alternatively, the external rounded hammer can be pulled back or cocked for a more precise first shot from a lighter, single-action mode. The long double-action trigger pull weighs 12.5 lbs., while the single-action pull [hammer raised or cocked] is 5.5 lbs.

In either case, after the first shot, the slide cycles and the hammer re-cocks to single action. If you don’t want to fire a subsequent shot, you can safely lower the hammer by pushing down on the slide-mounted decocking lever, which also serves as a safety device. When you push the lever down, the body of the lever is located between the hammer and the rear of the firing pin so that the hammer can safely fall forward (this action should still be done in a safe direction because anything mechanical can fail).

The lever, once depressed, can be left in its downward position because it’s not spring loaded to return to its original position. If you do leave the lever down, pressure on the trigger meets with no resistance, and nor can the hammer be manually raised to fire. If you carry the gun with a loaded chamber, this type of safety means you are carrying the gun on safe. 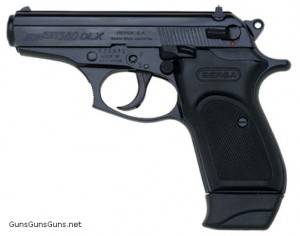 The Thunder 380 in black with an extended magazine.

There’s a magazine-disconnect safety, so if you remove the magazine, the gun can’t discharge. In addition, there’s an internal locking system operated by a special key located above the trigger in the left side of the frame. To fire, turn the key so that the lock is aligned with (F). When you turn it to the locked position (S), neither the hammer, trigger nor slide can be moved, nor can the pistol be disassembled.

The Bersa uses an external flat bar on the right side of the frame connecting the trigger to the hammer and sear. Vertical grasping grooves are at the rear of the slide. To load and unload, put the manual safety on (i.e., down) and insert a loaded magazine into the gun. Grasp the slide at the rear using the serrations. Draw back the slide fully to the rear and let the slide spring forward, chambering a cartridge. (Do not ride the slide forward.) You can now place an additional round into the magazine.

The Thunder measures .75″ thick in the slide area, and the barrel measures 3.5″ long. The gun weighs 20 oz. and carries dull-black polymer impressed checkered grip panels with slight thumb swells affixed by a screw on either side of the frame. Both the front and back straps are grooved. The standard finish is a dull, non-reflective black; nickel or Duotone finishes are available.

In addition to grasping serrations at the rear of the slide, the Bersa sports a smooth-faced trigger. The front of the trigger guard has a hook or projection on its lower forward face. The Bersa has an external slide stop that gives the user an easy means to lock back the slide for insertion or clearing the arm. The magazine release is located right beneath the slide stop at the top rear of the trigger guard area. The Bersa comes with one magazine, which has cartridge witness holes in its body and a finger rest in the removable base plate.

Range Report
Pocket guns such as the Bersa are designed as personal protection guns, and while the Thunder 380 comes with a three-white-dot sighting system, it’s not meant to be used for precision shooting at 25 yards but rather as an emergency self-defense arm. This was all too well borne out when we did accuracy work at 25 yards. As noted in the table below, while the gun can shoot 2″ groups from a gun-bag rest at this distance, the norm for most all the shooting we performed was 5″ groups of five rounds each.

The rear sight is windage adjustable via a small screw that moves the rear sight blade, and this is helpful because various brands and bullet weights didn’t shoot to the same point of aim.

Here are our results at 10 feet from the rest over a Competition Electronic Pro-Tach chronograph:

Disassembly for cleaning is simple. After ensuring the gun is unloaded, lock the slide back using the slide stop. On the forward right side of the frame there’s a lever that resembles the slide stop. Pull down on this lever until it’s at almost a 90-degree angle. Now pull back and up on the slide, releasing it from the frame, and ease it forward and off the barrel against the pressure of the recoil spring.

Final Thoughts
The Bersa pistol is a workhorse, and while not as well-finished as some others, it provides most everything found in more expensive pistols of this design. There’s just no particular cachet attached.