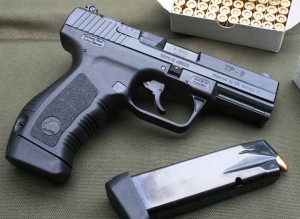 The TP-9 from the right.

Recently I was introduced to the TP-9 semiauto pistol manufactured by Canik55 in Turkey. The TP-9’s silhouette looks familiar because the gun is based on the Smith & Wesson SW99, which was based on the Walther P99. Century Arms is importing it into the United States, and I obtained one for a test/eval.

The TP-9 employs a double-action striker-fired mechanism with a de-cocking button located on the top rear of the slide. When a round is chambered, the striker is cocked (you can see it at the rear of the slide). Depressing the de-cock button with either the right or left thumb returns the trigger to a short double-action trigger stroke. 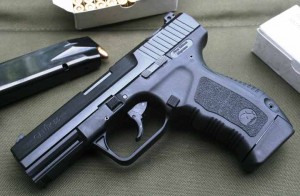 The TP-9 chambers the 9mm pistol cartridge. Two 17-round magazines come with each pistol, bringing the loaded capacity 18 rounds. A 4″ barrel guides the projectiles to the target. Overall, the pistol measures 7.1″ long with an empty weight of 1.42 lbs.

Like the SW99 and P99, the frame is polymer and the slide steel. The rear sight is adjustable. Two interchangeable backstraps are included—small and large. To change the backstrap from one to another, you tap out a roll pin with an appropriately sized punch.

For my practice and testing sessions, I fired a 9mm ball load from Century Arms and a 124-grain load from HPR Ammunition. The HPR ammo was loaded with XTP controlled-expansion bullets. While the trigger did feel a bit stiff when dry-firing the gun, during live fire I didn’t really notice it. 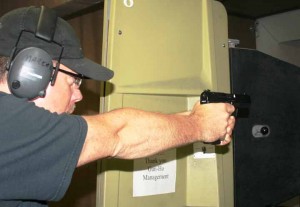 The author sends rounds downrange with the TP-9.

Step number one: slow fire the pistol using a two-hand hold. I found the sights were right on from the factory. All bullets impacted tightly together from 10 yards.

The next phase: fire the pistol single handed with my right and left hands. I encountered no stoppages during this phase.

With the slow-fire chores out of the way, I decided to heat the gun up. I loaded both magazines to capacity and began rapid-fire drills on multiple targets. Within moments the ground was littered with empty brass. The gun ran like a champ. 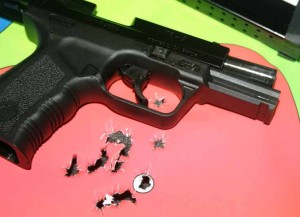 I was impressed by the trigger reset and the ease with which I was able to put multiple shots on target. The gun sat very well in my hands and indexed naturally on target. Even during moving drills I was able to keep the pistol locked in on the target without difficulty.

Before sitting down to write this review, I took the TP-9 pistol to the range on three separate occasions. The combined ammo count ran somewhere in the 500–600 round range. During that time, I didn’t encounter any stoppages. The gun started out lubricated, but I didn’t disassemble it during the test period for cleaning. For my last session, I drove the gun as hard as I could and was pleased with its performance.

Definition: Fire Extinguisher Gun
A firearm kept loaded and ready in a place where all the adults in the household can access it in an emergency.
To my way of thinking, the TP-9 is a whole lot of gun for the price. It’s a gun most anyone can afford to buy and shoot regularly, and it might also be a good candidate for a house or fire extinguisher gun.