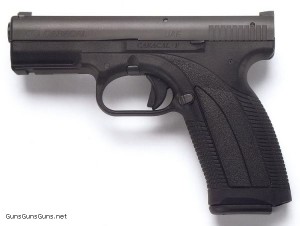 The F from the left.

The new-to-the-United States Caracal pistol is the result of Wilhelm Bubits and his Caracal design group. Retired from Austrian Customs, Bubits is not a newcomer to the firearms world, having worked for both Glock and Steyr. While at Steyr, he designed the Steyr Model M Series pistol. Not surprisingly, the Bubits-designed Caracal pistol strongly reflects these exposures. The Caracal models F (full size) and C (compact) are now offered here in the United States through Caracal USA. A third version—the SC (sub-compact)—is not yet importable to the United States because it lacks the required BATFE import points to qualify it as a sporting firearm.

The Caracal is a polymer-framed pistol with carbon steel slide. According to the international Caracal Web site (the U.S. Web site will be up and running soon, I’m told), the metal parts are treated with a proprietary Plasox finish, described by the manufacturer as a plasma-based surface treatment producing an “oxidation-protective coating resistant to aggressive environmental conditions.” The F model weighs 27.9 oz., the C model 26.1 oz. For the sake of clarity, because the two 9x19mm-chambered samples are nearly mirror images (albeit one is shorter and with the Quick See (QS) sight option), the primary focus here is the full-size pistol. (To see the Caracal C’s page, click here.) 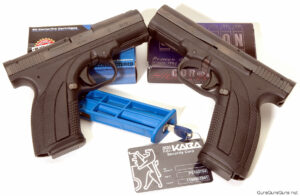 The Caracal C (compact) is on the left, and the Caracal F (full-size) is on the right. The optional blue magazine lock is at center.

The slide is polished smooth, with a flat running the top length and rounded from this flat into vertical sides. There are 10 vertical grasping grooves at its rear. The front sight rides in a dovetail cut and is adjustable for windage. The horizontally-grooved rear sight is fixed and is, in essence, an extension of what otherwise appears to be the back plate, which on other guns of this nature retains internal parts.

Not so here, however. In this case, the sight is part of the Firing Pin Unit (which contains the firing pin and its spring) and is mounted into the rear of the slide using a hollow cross pin. The unit also retains a long metal arm that controls the passive firing pin safety. The rear of the firing pin protrudes through the unit when the firing pin is partially cocked. The F model has a white dot in the front sight and a white dot below the notch of the rear sight. (Regarding sights, I’ve been told discussions are ongoing with Trijicon to have tritium inserts installed. I suspect that down the line the rear sight will also be a dovetail install.)

The C model I tested has the optional Quick See (QS) sight, in which only the front sight has a white dot. With the QS sight, the top of the slide from behind the front sight back to the ejection port is tapered upward. The body of this projection is cut front to back in a decreasing taper. At its terminus, the cut becomes the rear sight, complete with square notch and horizontal serrations. The top of the slide is flat from the rear of the ejection port to the back of the slide.

The Quick See sight on the Caracal C.

The John M. Browning-derived barrel lock-up has its hood locking into the large ejection port window. The hood has a small cutout serving as a visual loaded-chamber indicator. A fully-supported chamber encircles the cartridge case. An external and vertically-pinned, spring-driven extractor is at the lower right portion of the ejection port.

The breech face is separate from and pinned into the slide body with a hollow roll pin. (One possible plus for doing it here is that if the breech face is damaged, a repair is less costly than replacing the slide.) The long and ample coil-spring-powered extractor is at the lower right side of the ejection port. This coil spring also powers the aforementioned passive firing pin safety arm. Also worth noting: The passive firing pin safety, the firing pin and the extractor are not fully enclosed on their lower sides, thus aiding in cleaning and preventing the build-up of debris. This very clever combining of parts efforts is reflected in the Caracal pistol having only 28 parts that, according to the manufacturer, are fully interchangeable.

The polymer guide rod-mounted captive recoil spring and the barrel muzzle protrude slightly from the vertical front face of the slide. Thoughtfully, the edges of the slide face are slightly rounded.

The slide assembly moves on guide rails that are integral parts of what the instruction manual terms the “Multifunction Part Unit” (more on this below). According to the manufacturer, the rails are made as long as possible to promote stability by reducing torsion and flexing of the grip frame during firing, and this slide and rail interaction provides a close fit between the slide and grip frame. Also said is that, with the rails being part of the frame sub-assembly that bears all internals, it’s easier to assemble the mechanism for manufacturing or disassemble it for maintenance and replacement.

Inside the frame are the trigger assembly and the aforementioned Multifunction Part Unit. This unit is pinned in the frame by two traverse roll pins and contains the operating controls, with the trigger system separate. The Caracal uses the partially-cocked striker concept that now enjoys wide acceptance thanks to Glock’s similar system. In condensed terms, by moving the slide rearward even partially, the sear captures the striker. A complete pull of the trigger fully retracts and then releases the striker, firing the chambered cartridge.

The Caracal also sports a passive safety lever within and centered in the trigger face to further prevent inertial trigger movement sufficient to fire the pistol, such as might happen if the gun is dropped from a great height on its muzzle. And yes, this is the job of the passive striker pin safety as well. The redundancy is thought necessary to provide total safety. The trigger lever is disengaged when the trigger is pressed.


The word “Caracal” is the name of a desert cat. The company chose the name to reflect the guns’ origin and production in Abu Dhabi, United Arab Emirates.
An accessory rail is on the frame’s dust cover (an Insight Technology light and a Safariland light fit well). The take-down lever is above the trigger guard. To use, after ensuring the pistol is decocked, retract the slide back slightly, hold and then pull down on the lever. Allow the slide to move off the frame.

The ample trigger guard is rectangular with the front lower corner rounded. The ambidextrous and vertically-grooved magazine catch, which is partially protected by a molded ridge in the frame, is at the lower rear of the guard.

In an effort to avoid inadvertent bumping of the slide stop, a molded-in ridge is beneath the exposed lever head where it does deflect a finger.

Front and backstraps have molded checkering, and the frame sides feature almost-smooth pebbling. The backstrap curves deeply inward at its top and offers a lanyard hole at its lower rear. The sides of the grip curve outward, creating a slight but effective palm swell. These, coupled with the frame curving inward above the swells, helps you keep a solid grip on the gun.

The manufacturer claims the Caracal features the lowest center of bore-to-frame axis of any handgun. I can’t guarantee that, but I do know it’s low, and, combined with the 111-degree grip-to-frame angle, it does definitely minimize muzzle flip and I think adds to controlling recoil.

Caracal offers an optional, key-operated, blue-colored magazine safety lock. To use, after the gun is verified empty and the striker is partially cocked (trigger forward), insert the blue magazine safety. Locking it locks slide, trigger and faux magazine into the pistol. You need a key to reverse these actions.

The magazine’s metal body is ribbed, and the follower and  removable base plate are polymer. The F body has cartridge witness holes at 5, 9, 13 and 18; the C Model has witness holes at 5, 9, 13 and 15. The base plate is held in place by the bottom coil of the magazine spring protruding through a slot in the plate. Pushing this protrusion inward allows the plate’s removal. Three magazines come with each gun.

Range work went well. I’d been forewarned the guns had already been shot extensively, so I didn’t expect, nor did we have, any malfunctions. Joe Mulligan, Irv Gill and AJ Stuart helped me shoot a variety of ammo brands, bullet weights and velocities in the two guns. We shot Black Hills 115-grain JHP, Hornady 115-grain XTP, Winchester 127-grain +P+ RANGER HP and assorted King Shooters Supply lead bullet reloads. (There’s no prohibition on using lead bullets in the Caracal pistols.) 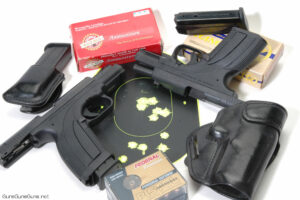 Examples of 20-yard, five-shot groups we achieved with the Caracal.

Accuracy was more than acceptable. I shot both guns standing, two-handed at 20 yards using Black Hills and Hornady ammunition. With the compact, I shot five rounds of Hornady loads into 2.75“, and with the full size using Black Hills, I scored a five-shot 1.75“ group. Trigger pulls measured 4.25 lbs. for the full-size gun, while the compact came in at 4.75 lbs. Both were smooth.

Below is the data obtained using a Pro Chrony chronograph with the Caracal F. The temperature 65 degrees F at 300 feet above sea level.

As far as the Quick Sight goes, it neither hindered nor improved our efforts. Only time and hard use can validate or disprove any other claims, although it’s worth noting that in 2007 the pistol passed a handgun test identified as the WTD91 protocol for the German Army.

Deliveries of the two models are expected by the end of 2010, but with the caution that firearms imports can be, and often are, delayed.