When I entered law enforcement in the mid-1970’s, the snubbie revolver was the off-duty gun. While a few hard chargers would carry a 1911, Commander or Browning Hi-Power, most of us behind the badge carried a snubbie. Heck, for many the snub .38 Special was a basic academy graduation present. The snubbie hasn’t changed much over the past 75 years, a 19th century design that has changed little. 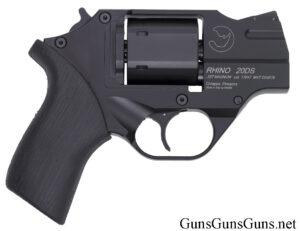 The Rhino from the right.

Recently I had the opportunity to test and evaluate a new snub revolver that is truly different, one that might very well change how all of us look at the combative revolver. Introduced by the Italian-based Chiappa Firearms, the Rhino revolver is just as brutish as its namesake, but that’s where this characteristic ends. Machined from solid steel/aluminum using the most current technology, the result is a truly unique wheel gun that will satisfy even the most hardcore pistol shooter. Don’t let the unusual appearance put you off, the Rhino is a space-age design made for serious shooters.

The Rhino will eventually be offered in a number of barrel lengths, but the 2″ snubbie is the first model to hit American shores. This makes a great deal of sense to me because the snub still enjoys huge popularity with folks concerned with their personal security.

The Rhino is a true milestone in the long history of the revolver. Unique features include a flat-sided cylinder that makes the gun more concealable and more comfortable to wear, but it’s the barrel location that makes this revolver truly unique. The Rhino barrel is aligned with the bottom cylinder chamber, which is the key factor to the Rhino’s ability to tame the stout recoil of the .357 Magnum cartridge, even from the short 2″ barrel. The position of the barrel lowers the bore centerline more in line with the shooter’s arm allowing for a more natural point when engaging a target. For example, the height of the bore over the forearm of the world’s most popular revolver, the Smith & Wesson Model 10, measures 2″. The height of the bore over the forearm for the Rhino measures a mere 0.75″—a significant difference. 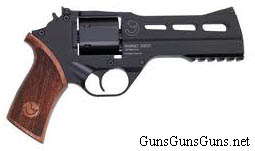 At press time, the 5″ barrel version is not yet available in the United States.

The Rhino’s sight line is also low above the forearm, which allows the shooter to get on target naturally with great accuracy and speed, something semiauto users will appreciate. As previously stated, this feature also drastically reduces recoil and muzzle-flip, which ensures subsequent shots will be on target faster than ever before—a critical component in any fighting handgun. This reduction of felt recoil due to advanced design permits the use of ultra-light alloys in the construction of the Rhino, making it easy to carry and conceal.

The Rhino’s grip configuration helps place the web of the hand above the barrel line, which also aids in fast on-target access. The stock Rhino grip is a black neoprene material that helps absorb some of the recoil, but wood grips with differing grain patterns are also available. After all, some just want a good-looking grip on their gun, even if the gun is so untraditional it’s named after an ugly animal. But then, beauty will always lie in the eyes of the beholder, and the Rhino has some features that make it “beautiful.”

A short trigger (i.e., the length of travel is shorter than other revolvers’ triggers) combined with a smooth trigger action with no felt glitches help make the Rhino fast and easy to shoot. The trigger on my test gun measured just over 8 lbs. and was easy to manipulate. The Rhino will be available with three different trigger actions, one being lighter and easier to press than the next. Chiappa’s president, Ron Norton, told me two of the trigger actions are for competition only and require certain types of primers, etc. These two trigger actions are not for use in a gun intended for personal security. At the same time, Norton explained that Chiappa understands there are a large number of shooters who use revolvers for competitive purposes, and they want to make the revolver’s design available to them as well. 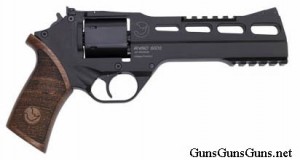 At press time, the 6″ barrel version is not yet available in the United States.

At first, I thought the extreme upward angle required to grip the gun and engage the trigger face would inhibit fast and accurate shooting, but this wasn’t the case. In fact, the Rhino almost felt intuitive in the hand. Indents in each side of the frame also help get the index finger on the trigger face comfortably without having to over extend.

The Rhino also allows a barrel change, making it adaptable to the field or as a service/duty sidearm. With 2″–6″ barrels available, plus various sight options including tritium and fiber-optic sight blades, the Rhino is a true multi-purpose handgun capable of combative applications, scoring 10 rings or taking game. None of the front sights were available when I received my test gun, so I just did my old standby modification of painting the front sight blade orange. This gave me a very familiar sight picture, looking a lot like that on my Glock.

Featuring double- and single-action capability, the single-action is actuated by a hammer-cocking device that engages the unexposed hammer to prepare to fire. The hammer doesn’t stay in a cocked position, but returns upright. To warn the shooter they are handling a cocked revolver, a red plunger protrudes from the top of the revolver frame, which is easy to see or feel in the event you’re working in a low-light environment.

A double-action-only (DAO) version is available and is the model I would select for personal carry. Norton let me examine his personal carry gun, which is a DAO version in which he stoned the action, making for a very smooth and easy to operate trigger. No doubt there will be a number of custom gunsmiiths who will offer modifications to the Rhino once it’s widely available

The all-black finish of my test revolver gave the Rhino a very no-nonsense appearance, which I happen to like (you can also get it in stainless steel). I also like the location of the cylinder release latch, which is well above the grip at the back of the frame. The latch is easy to manipulate by merely pushing down on the ample shelf and rolling the cylinder out of the left side. The cylinder crane is robust and solid, as is the ejection rod and star.

However, Norton told me they have been looking at bolstering both of these to make sure both work as intended. Apparently in early testing, the ejector star was able to jump over expended cases in the cylinder, and Chiappa wants to make sure this never happens in the field or on the street. Norton is a retired police officer, so he understands what’s needed in a combat handgun and wants to ensure the Rhino is all it can be.

The Rhino can also be considered one of the more “safety conscious” revolver designs to come along, offering four different safety features:

Of course, we should all keep in mind that safety is a function of the brain not a mechanical device. Always follow the “Flawless Four” of firearms safety, especially keeping your finger off the trigger unless you intend to shoot, and always keeping any gun pointed in a safe direction. No internal device will ever replace a focused shooter who concentrates fully on the gun they’re working with. It only takes a quick second for tragedy to occur, so whenever any firearms is handled, give it your complete attention—period.

While the Rhino is certainly not the most handsome handgun I’ve ever tested, it did turn out to be one of the most satisfying. I instantly liked the way the Rhino felt in my hand. The grip allowed for a solid hold even when my hands started to sweat.

I started my test by shooting various styles of ammo off-hand at 50 feet on Birchwood Casey Dirty Bird targets. While I could’ve benched the gun, this isn’t what a snubbie is intended for, and getting a feel for the trigger while holding the gun on target is essential.

While I was very satisfied with the Rhino’s accuracy, it deserves a bit of explanation. The .38 Special rounds were easy to shoot well, but the .357 Magnum rounds proved quite challenging. My first .357 group measured more than 4″, but I quickly realized it wasn’t the Rhino but me trying to get over the initial concussion. My next group hovered around 3″, and the third came in at 1.5″. Here are some specifics:

When I first started shooting, I used the thumbs-forward grip I usually use when shooting a pistol, and it worked quite well with the .38 Special rounds. When I changed over to the magnum rounds, however, it got a big more exciting. When shooting the Rhino, remember that the cylinder-to-barrel gap sits just above the lower frame, and if any of your fingers are forward of this gap, you’ll be notified that this isn’t a good idea when hot gasses are expelled from this region. I mentioned this to Norton, and he said Chiappa is aware of this and looking at modifying the Rhino’s frame to redirect gasses forward and upward to protect the shooter’s fingers. I hope they move forward with this idea because I really like being able to grasp my pistols and revolvers in the same fashion without having to relocate my thumbs.

I shot 300 rounds of various .38 Special and .357 Magnum loads through the Rhino without a problem. The 2″ model will come with a leather, pancake-style, Italian holster so the end user can carry it instantly. This holster allowed me to do some draw-and-shoot drills using the DST-CB target from Law Enforcement Targets, which defines an 8″ high chest “Primary Neutralization Zone” on each target as well as two 3″ trigger-control dots. The Zone is anatomically correct in a linear fashion, which is why I like to use these targets for this type of training.

At distances from 5–25 feet, I had no problem drawing and firing two rounds in 2 seconds, which I think is a reasonable combat standard. When doing this drill, I realized the Rhino offers excellent point-ability: It goes on target smoothly, quickly and without thought.

If it sounds like I’m an enthusiastic supporter of the Rhino, I am. This is a neat little gun with a great deal of potential. Only time will tell if American shooters embrace it like I have.