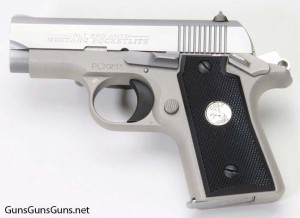 The Mustang from the left.

The Colt press announcement headline reads, “Colt introduces .380 Mustang Pocketlite Pistol.” More accurately, I see this rather as a new and improved version of the original Mustang Pocketlite pistol introduced in 1984, which was derived from the then-new Government .380 pistol introduced in 1982. This line of semiautos was discontinued by the year 2000 due to Colt’s decision to concentrate the company’s resources on the manufacture and sale of its AR-15 rifle to the U.S. military and other such entities.

Colt has brought it back, and I got my hands on one for a little T&E. 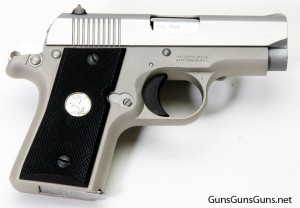 The Mustang from the right.

The new Mustang closely follows the original in that it’s very much a miniature version of the Colt 1911 in appearance and function. The Mustang is single-action-only and holds six rounds of .380 ACP ammo in an all-metal magazine. It measures 5.5″ in length and sports a 2.75″ barrel (measured from barrel hood to muzzle). Standing just shy of 4″ tall, it measures roughly .75″ at the muzzle and 1″ at the frame base, including grips. It weighs 13.7 oz. Trigger pull out of the box measured 5.5 lbs., but after additional lubrication, some dry fire and shooting, it now measures a fairly clean-breaking 5.25 lbs.

The external controls—i.e., the thumb safety, slide stop and magazine catch—are positioned on the left side of the aluminum alloy frame, which is now CNC-machined from bar stock (instead of cast). The thumb safety is top rear, the slide stop is over the rounded trigger guard, with the magazine catch at its lower rear. The magazine is all metal, as is its follower, and both are plated. The magazine fits flush with the frame, with its forward lip extending slightly from the frontstrap. There is no beveling of the magazine well. Per Colt’s website, the frame is “electroless nickled aluminum” with a fine bead-blast finish. No manual grip safety is used, and the backstrap is solid.

The front sight is part of the slide.

The slide has a smooth, ramped front sight that is an integral part of the slide, while the square-notch rear sight is in a dovetail cut and is adjustable for windage. The rounded top of the slide, including the front sight, has the same fine bead-blast finish as the frame.

The front sight is the same color as the natural stainless steel of the slide, while the rear sight is black in color. The vertical sides of the slide are highly polished. Ten vertical grasping grooves on either side are rearward of the ejection port. The port’s rounded rectangular opening begins at the right top of the slide and extends down past midline; it’s sufficiently ample that empty cases or live rounds exited without hindrance.

An internal, right-side extractor is employed, as is a passive firing-pin lock. The extractor and rebounding firing pin are contained in the slide with the familiar 1911 firing-pin stop. 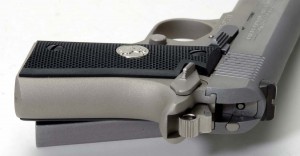 The bead-blast-finished backstrap gives the pistol a nice feel.

The round, grooved and nickel-plated Colt Commander-style hammer is nicely bright-polished on either side. It moves into and remains in a relief notch of the wide and rounded grip tang, preventing any cut or nip to the shooter’s hand.

The Mustang operates using a modified Browning lock-up of barrel to slide, with the stainless steel barrel having one annular locking lug and with the barrel chamber hood abutting the breech face. A non-captive dual spring travels on a round-headed polymer guide rod.

The 1911-style manual thumb safety has three horizontal grooves on both sides of its adequately-sized thumb piece. Its movement is firm and positive. You can manipulate the slide with the safety in the on position.

Note: Removing this safety, if necessary, should be done cautiously because the Safety Plunger and Safety Plunger Spring (Colt’s terms) are inserted into the hammer pin behind the safety and provide the tension to control the thumb safety. The spring and plunger are at a right angle to the safety body and can easily fly out and get lost. I did this years ago with a Government Model and spent an hour or so finding the parts! 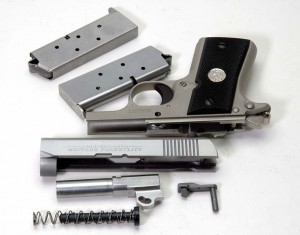 The slide stop has three grooves on its upper surface, and the part is retained to the frame by a horizontally-elongated U-shaped spring opening rearward and lies within a recess cut in the frame. It’s secured only by the upper leg of the spring bend at a right angle so that its tip can then fit into a hole within the recess. Suffice to say that here, too, you should take care not to dislodge this part.

The polymer stocks are attached directly to the frame, each with two blued and slotted screws. The stocks have finely-molded checkering surrounded by a narrow, smooth border. The silver-color Colt rampant-stallion medallion is centered and inset into each stock. The left-side grip panel is relieved to allow a deep arc of movement of the thumb safety, and also relieved to accommodate the positioning and easy reach of the slide stop.

Fixing a Stuck Ejector
Moving the ejector too far down into the frame can cause the ejector reverse itself and it gets stuck in the magazine well. Per the instruction book, the “reverse side of the tail of the ejector becomes lodged against the sear spring to hold it in this position.”

To fix it, with the slide and both stocks removed, cock the hammer. Then turn the gun upside down. The ejector might then come unstuck because cocking the hammer should ease sear spring movement. If this doesn’t work, insert a screwdriver down into the mag well from its bottom opening and use the screwdriver as a lever to push the sear spring away from where it bears against the tail of the ejector. Take care not to touch the sear or any other part of the mechanism with the screwdriver. As the sear spring moves out of contact, the ejector should fall back into its correct spot. If this doesn’t happen, double check that you’ve pushed the sear spring far enough away from the ejector and use your finger to then move the part.

The instruction book kindly supplies a two-view line drawing of how and where to use the screwdriver. Note: Colt cautions not to use a magazine for a quick fix because this may damage the ejector.

The plated-steel magazine and follower has six inspection holes on either side of its body. The fixed floorplate of the magazine (two are supplied) is marked “COLT .380 AUTO” and stamped with the Colt stallion logo and the letter “M.”

The pivoting aluminum trigger is grooved on its curved face. A slide-mounted firing pin lock is present, but accessing it requires removing the fixed rear sight. Such removal is unnecessary for any normal cleaning.

The firing pin lock is always engaged unless the trigger is pulled. The trigger’s rearward movement moves the ejector forward so that its tip disengages the firing pin lock. This movable, left-side-mounted ejector lies within the frame. The ejector must be rotated down enough for the slide to clear it during reassembly. (There’s no need to depress it during slide removal because the slide moves it down sufficiently for this action.) The ejector will normally return to its upright position when a magazine is inserted. If, however, the ejector has been depressed too far downward, it can become stuck in the frame.

To correct this problem, see the sidebar, “Fixing a Stuck Ejector.” I did not attempt to verify this cure, though, because I didn’t want to cause something that might require outside help. My inquisitive efforts were limited to determining if the longer magazine of the original Government Model 380 would fit and lock the slide back in the new pistol, which it does. I also wanted to see if the longer slide would go on the new Mustang, and it did.

Other than making sure to avoid causing the above-mentioned “malfunction,” my friends and I had only one failure to feed during our range shooting session. It was the second round my friend AJ Stuart attempted to fire, which resulted in a Hornady 90-grain Critical Defense XTP-JHP round (952 fps) chambering only halfway. I wasn’t able to determine the cause because AJ immediately cleared the gun after calling my attention to it. I gave him the other supplied and now fully-loaded magazine containing the same ammo, and all functioned properly. I then refilled the first magazine with the same ammo, and it too emptied without a hitch.

We then switched over to Cor-Bon 90-grain JHP to see how well the Mustang would run with a hotter load. We had no problems with the Cor-Bon at a chronographed velocity of 1,044 fps, which did add some bounce to felt-recoil to be sure. 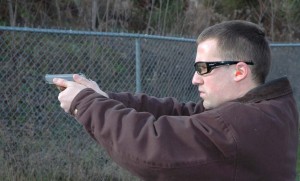 We also shot Remington Golden Saber 102-grain JHP (which clocked at 874 fps), and the heavier bullet was not a problem either. We did all of our shooting, including the accuracy stuff, at 15 yards. For the latter, I did black out the front sight with Magic Marker when I fired the five-shot groups, which all came in plus or minus 2″. I also cleaned out assorted and loose rounds from the bottom of my ammo bag and all of these shot OK as well. (And some of these cartridges were really cruddy!)

Disassembly and reassembly of the pistol proved uneventful, with only one quibble: The slide’s lower edges weren’t rounded at all. I agree I’m being a bit picky because this area doesn’t get handled in carry or use—only when cleaning. A bit of light file work will rectify this.

That said, the rest of the gun does not have such edges. I also have to admit I’m a bit spoiled on this—the Colt Government Model I bought when they were first made and has long been used by my wife, had the benefit of a now-retired pistolsmith.