Diamondback Firearms launched as a business in 2009 and began producing a pocket-size, .380 ACP semiauto pistol called the DB380 shortly thereafter. Diamondback would soon follow up the DB380 up with a .32 NAA version (the DB320) and the 9mm-chambered DB9, which we reviewed in 2012. 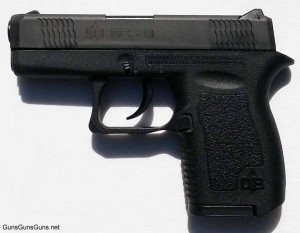 In the spring of 2013, I was in the market for a true pocket gun I could carry in shorts and pants pockets, and I decided I didn’t want to go any smaller than .380 ACP for defensive purposes. I also decided to not go any bigger because pocket 9mms are pretty feisty in my hand, and a bit inflated in size.

The DB380 is built on a glass-reinforced polymer frame with steel internals held in place with four cross pins. It carries a stainless steel slide with wavy grip serrations machined front and rear, and a 2.8″ stainless steel barrel (Diamondback also offers an extended, ported barrel).

A double-action-only (DAO) trigger launches the striker-fired, locked-breech system into action. The steel, smooth, gently curved trigger connects to the completely internal striker via dual connecting bars to ensure a smooth stroke. Diamondback says the trigger pull measures 5 lbs. and calls the setup the Zero-Energy because the striker isn’t pre-loaded; your trigger finger does all the work. A dual recoil spring system harnesses the slide.

The DB380 employs one official safety: a mechanical firing pin block. The long DAO trigger pull essentially serves as a second safety. And, the pistol features a visual loaded chamber indicator; i.e., a small slot between the ejection port’s rear and the barrel’s rear that allows you to see a cartridge rim, if present.

The author’s DB380 from the right.

The DB380’s grip features light stippling on its sides and arched backstrap, and eight bumpy horizontal grip lines on the front strap. The squared trigger guard features six horizontal lines to provide more grip to folks who run a support-hand finger around the front of the trigger guard.

The frame includes a small beavertail to help you avoid slide bite. The frame and slide edges have been smoothed and rounded to ease holstering and drawing. 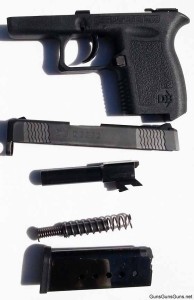 The DB380 features just two controls aside from the trigger: 1) the square, steel magazine release button on the left grip and just aft of the trigger guard, and 2) the two assembly catch levers above the trigger just below the slide, on each side of the frame. All three controls are serrated to aid grip.

Speaking of assembly, the DB380 not only looks like a baby Glock, it disassembles very much like a Glock, too. With the magazine removed and the chamber cleared, pull the trigger to release the striker. Then pull the slide back just enough to allow you to fully depress the assembly catch levers. Then, while holding those levers down, slide the slide forward off the gun.

Available slide finishes include black, nickel and stainless. You can get the frame in black, orange, pink and flat dark earth.

Reliability
Diamondback recommends a 50–100 round break-in period, but I will report my DB380 experiences from round one. During the DB380s first trip to the range, straight out of the box without cleaning or lubing, I loaded the mag full of Federal 95-grain total metal jacket (TMJ). I racked the slide, and the first round failed to feed (FTF), hanging up on the ramp. I removed the magazine, cleared the round, re-inserted the mag (now with five rounds), and successfully racked it. This problem recurred over the next several full mags—again, first round only—but went away once I was roughly 125 rounds in (which included 50 Hornady FTX 90-grain hollow points (HPs)).

While shooting the second mag of TMJs, the gun failed to eject; specifically, it stovepiped. I cleared it, and didn’t suffered another malfunction that day with roughly 25 more TMJs and HPs. And over the next two years I ran roughly 50 more uneventful rounds or so through the DB380.

Fast forward to last month at the range, when the DB380 suffered two failure-to-extracts in 25 rounds or so of the Federal 95-grain TMJ. In both instances, the spent case’s base seem to hang up on the incoming case’s lip. Note: To this point I still hadn’t cleaned/lubed the gun (yes, I know, flame away…).

This week I cleaned and lubed the gun with FrogLube and returned to the range. I purchased 50 rounds of Tennesee Cartridge 100-grain FMJ at the range to shoot with my remaining Federal TMJs and Hornady HPs.

I loaded up my last six Federal TMJs, and they produced one stovepipe and another failure to extract. I loaded up Hornady HPs, and the first seven fired fine. The next seven produced one FTF (on the ramp), as did the third magazine. And over the last 24 HPs, I suffered five more FTFs.

Throughout the session, I periodically switched to the Tennesee Cartridge FMJs for a magazine or two. The good news? The 30 rounds that fired ran malfunction free. But unfortunately, 20 rounds did not fire the first time through the gun, and only a handful fired the second time I ran them through. The range clerk said the Tennesee ammo is known for a hard primer that can prove problematic. Given that this DB380 has never suffered a light-strike issue with the Federal or Hornady ammo over two years, I blame the Tennesee ammo for these misfires. (On the plus side, all those misfires did serve to illuminate deficiencies in my trigger stroke!) 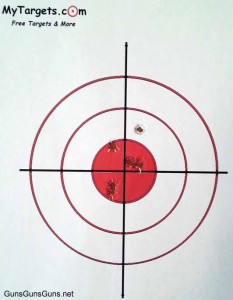 The author’s target results with the DB380.

Accuracy
I slow-fired the DB380 off-hand with seven rounds of the Hornady HPs at 5 yards, and achieved a 2.25″ group with one sort-of flier. If I don’t include the flier, the group measures 1.5″.

Feel
The gun feels relatively comfortable to shoot, and controllable. I like it a lot better than a friend’s Ruger LCP I shot once. The LCP felt squirmy in my hand, almost as if it was rising up in my grip. In contrast, I feel firmly in control of the DB380.

Initially I didn’t like the magazine release button. It features a somewhat sharp corner that irritated the middle finger on my shooting hand on occasion. But I haven’t noticed this issue lately and didn’t remember it until I looked at my notes. Maybe I’ve instinctively altered my grip to avoid contacting the button—pain is a good teacher!

I find the trigger comfortable, and I like the trigger stroke/pull, too. The gun points pretty well for me, and I pick up the sights quickly.

I carry the DB380 in a Remora IWB holster. I usually carry it in the front right pocket of my cargo shorts and pants. In those pockets the weight is fine, though if I’m also weighted down with my wallet, keys and sunglasses, I need a belt to feel secure. I forget it’s there unless I’m driving; then I might need to adjust the lump from under my leg to sit comfortably.

I’ve also carried it in a rear pocket (jeans and khakis), and it fit well in all but my Wranglers, which feature a fairly shallow rear pocket. It fit in the Wranglers, but it’s probably visible from the above. I’ve also stuck it in the front pocket of a pair of khakis that feature a wide, deep front pocket; that won’t fly in my jeans. 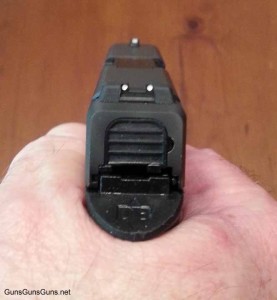 Looking down the sights of the author’s DB380.

I really like a lot about my DB380. The size and light weight make it very easy to carry concealed. I liked the feel in my hand and the trigger from the get-go. Now that I’m two years and 300 rounds in, I feel proficient with the gun, from drawing to pointing to executing good shots. The recoil is completely manageable. And for a close-range gun, it’s plenty accurate.

Which makes the lack of reliability a real bummer. If I didn’t really like it, I’d just quickly move onto to a different gun. And if the DB380 were a target gun, a plinker, a varmint gun, etc., I could probably live with a little unreliability. But this pocket gun is a last-ditch self-defense gun I depend on to save my life, which makes reliability extremely important. Which means I have to hang a poor rating on this gun.

I’ll probably experiment with different ammunition to try and find a cartridge that runs consistently. I might even look at tweaking the gun by polishing the feed ramp, etc. But ultimately, I’m probably still in the market for a pocket gun.