The mainstay of FN has historically been the precise production of other manufacturer’s designs. But in addition to producing the designs of other manufacturers, FN has developed its own product line, including precision sniper rifles, police shotguns, less-lethal launching devices and a variety of semiauto pistol designs, including a pistol that shoots a proprietary 5.7mm x 28mm cartridge. This pistol (or, more appropriately, series of pistols) is known as the FN Five-seveN. 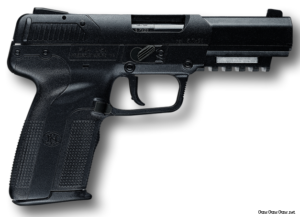 The Five-seveN on the black frame.

I received an FN Five seveN model USG to test and evaluate. I took the weapon to a recent department qualification shoot and gave it to officers who had never fired this weapon previously.

The results were quite favorable. The weapon was 100% reliable. Its inherent accuracy was greater than the ability level of most of the people who shot it. Comments ranged from “Wow, this gun is fun to shoot,” to “I wish I could carry this as a duty weapon, it sure is easy to shoot accurately.”

My own experience shooting this gun was quite similar to the experience of others. I found the gun pointed naturally. The recoil was on a par with a .22 WMR, and substantially less than 9mm, .40 SW or .45 ACP. Rather than the muzzle rising, the recoil impulse seemed to move the gun directly backwards, making for quick and easy follow-up shots. The grip/frame angle, coupled with deep checkering and stippling, kept the gun from shifting in my hand. The rough texture of the grip was cause for complaint by some, who felt it was too coarse and caused discomfort after relatively few rounds were fired.

I had heard and read concerns that the 5.7mm x 28mm cartridge was capable of defeating the soft body armor worn by law enforcement officers. While there are, in fact, 5.7mm armor-piercing (AP) rounds manufactured, they aren’t available to the public and are stringently controlled by BATFE (formerly known as ATF). I purchased the commercially available, standard SS197SR sporting cartridge manufactured by FNH USA. This round contains a 40-grain Hornady V-Max bullet. At $24.99 per 50-round box, the ammo costs roughly twice as much as a comparable number of more common handgun ammunition. 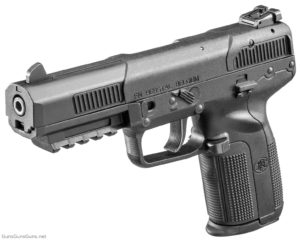 The Five-seveN from the left.

The 5.7mm x 28 mm round has a comparatively high muzzle velocity at approximately 1,700 feet per second (fps). (In comparison, 9mm has a velocity of around 1,000 fps, depending on bullet weight, barrel length and related variables.) The combination of high velocity and bullet configuration/composition are what contribute to armor-piercing capability.

In order to test the assertion that the 5.7mm was inherently capable of defeating soft body armor, I shot an expired (1999) patrol vest manufactured by a major supplier of American law enforcement body armor. I fired numerous rounds at distances ranging from 5–15 yards. I shot close groups (though not touching one another) in order to provide close to worst-case scenarios (although I limited my shot placement to the center-mass area). Although the rounds did penetrate multiple layers of the vest, none penetrated even close to the majority of layers. This was a comforting revelation, especially considering the apparent growing popularity of this caliber and weapon in the civilian population. It also suggests we don’t need to disallow the use of this weapon for law enforcement personnel due to the fact that roughly 10% of U.S. law enforcement officers killed by firearms are shot with their own weapons (disarmed by suspects) this weapon will not make that number rise.

I was unable to locate any information on real-world ballistic effectiveness, i.e., how the ammunition performed in human targets. The round’s high velocity (bordering on some rifle velocities, which induce hydrostatic shock) suggests penetration should prove acceptable. Whether the round tumbles or fragments inside the human body will affect terminal ballistics. Like all newly introduced calibers, time (and gunfights) will ultimately reveal its effectiveness. 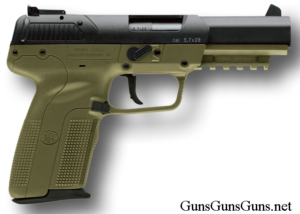 The Five-seveN on the green frame.

The Five-seveN is comparable in size to a large-frame semiauto. It sports a 4.75″ hammer-forged chrome bore that offers a 20,000-round service life. In addition to an all-black polymer frame, the steel slide is also encased in polymer, a departure from other polymer-construction weapon manufacturers. In keeping with most modern self-defense sidearms, an obligatory frame accessory rail (M1913, also referred to as a picatinny rail) is molded into the frame to accommodate a white light or laser system. The handgun has an adjustable rear sight composed of a black notch supplemented with white circle dots on either side. The front sight post is a ramp-type that is uncharacteristically high, with a white circle to aid in sight alignment. Everyone who shot or handled the pistol commented on the over-large front sight, expressing concern it might hinder a rapid holster draw or eventually suffer damage.

Unlike the Glock pistols’ striker-fired design, the FN USG utilizes a concealed hammer, which is actually a single-action design with a relatively light trigger pull. However, like most striker-fired designs, there is no repeat-strike capability in the event of a failure to fire, meaning you must manipulate the slide to cock the hammer.

The ordinary-length magazine holds a stunning 20 rounds due to the slim profile of the cartridges. While the slide release lever and magazine release button are in the normal locations, the safety is uniquely positioned along the frame directly above the trigger. The manual safety is ambidextrous and marked with a red dot. Whether right or left-handed, you can easily manipulate the safety with either your trigger finger of your master grip hand or the thumb of your support hand. In addition to the positive external manual safety and the passive firing-pin safety (an absolute must for all service weapons), this handgun also employs a magazine-disconnect safety, requiring a magazine be seated in order for the weapon to be fired. The rationale is that the operator can drop the magazine to render the weapon safe in the event they’re losing control of the weapon when engaged in a struggle with a suspect. The magazine-release button is also reversible to accommodate left-handed shooters.

My experience was quite favorable. I’m unaware of any agency currently issuing it as a primary sidearm, although some agencies issue the FN P-90 submachine gun (which fires the same ammo) as the primary entry/perimeter-containment weapon.

Chris Boyd is a 22- year veteran of the Carlsbad (Calif.) Police Dept. He has worked patrol, K-9 and vice/narcotics. Boyd is a certified Taser, MP5, NFDD and firearms instructor, and is currently assigned as a patrol sergeant. He’s also an entry-team leader on his department’s SWAT team.