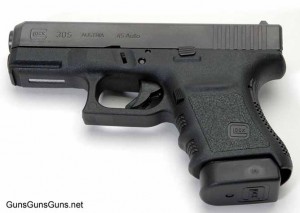 The author’s Glock 30S from the left.

The 30 was and still is a squat, bulky, compact handgun whose virtues are first and foremost that it’s a Glock, with all the attendant pluses and minuses of Glocks. The Short Frame designation of the 30SF indicates its grip has been reduced to create a shorter trigger reach to help those with short fingers or small hands grip the pistol and better manipulate its trigger. 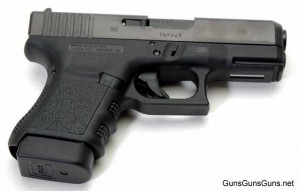 The author’s Glock 30S from the right.

The why and how of the 30S’ creation begins with the Special Investigations Section (SIS) of the Los Angeles Police Department (LAPD). The SIS wanted a more concealable version of the 30SF due to the particular nature of its assignment within the LAPD. The SIS is charged with arresting and aiding in the conviction of violent, repeat-offender crime gangs. The SIS most often arrests these offenders during the commission of the actual crime, extensively using well-armed plainclothes officers. These long-term recidivists are also well (and often heavily) armed, and they use these weapons during the offense and in resistance to any arrest.

So, SIS officers do need to be well armed, but remain unnoticed by criminals who are no strangers to surveillance and spotting lawmen. A robust, concealable, large-caliber handgun makes sense. The 30SF is good, and now with the 36 slide, the 30S is ever so much more concealable.

I obtained a 30S, and my review follows. 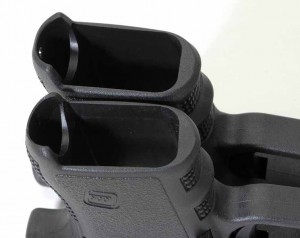 Note the backstrap reduction between the 30S (rear) and the 30 (front).

Exactly what all did Glock change to make the 30S? An industry source told me there were about five parts changed, but wouldn’t give me specifics.

I couldn’t make any hands-on comparisons between the 30SF and the 30S because I don’t have a 30SF. I did note the 30S uses the Gen4 dual-captive recoil spring assembly.

I do have a Glock 30 (purchased in 1997) to compare to the 30S. You can easily see the frame shortening on the 30S by comparing the sizes of the opening to the rear of each gun’s magazine wells (see photo). Using a cloth tape measure, I measured the grips of the 30S and an 30 from slightly below their trigger guard on a direct line around their backstraps with these results:

I also measured the 30 and 30S slide heights, widths and weights with these results:

Their frame weights were identical at 20 oz. I also switched their slides and was able to dry fire both pistols. I passed on live fire, not wanting to damage the guns (as well as myself!). Finally, please note: Glock does not sell slides separately. 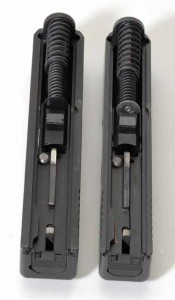 Just like the 30SF, the 30S features a picatinny-dimensioned rail on it’s dust cover on which I was able to install an ITI M2X light. Its barrel measures 3.78″ long, and it features an ambidextrous magazine catch. (Instructions on how to reverse the catch are in the owner’s manual.) Three magazines, a magazine loader and a nylon brush and polymer cleaning rod also came in the package.

The 30S magazine holds 10 rounds, with cartridge witness windows numbered 4–10 on its rear face. The magazine includes a smooth-faced and removable base plate, which is enlarged to extend below the grip to serve as a grip extension. The extension allowed me to take a good three-finger grip on the pistol.

Note: A 30S magazine will not lock into frames that lack the 30S catch because the catch has a metal portion that locks into a matching relief area where the magazine’s metal liner is exposed. Earlier magazines lack the cut. The reverse, though, is possible, and you can use non-ambidextrous magazines in the 30S.

The 30S frame continues the Glock tradition of including finger grooves on the front strap that, along with the backstrap, features Glock’s most current molded checkering. The grip’s sides are closely pebbled, and two shallow depressions on either side at the top of the frame serve as finger or thumb rests. There are six grasping grooves at the slide’s rear. 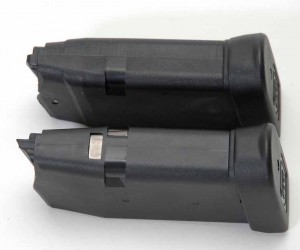 Standard Glock white-dot front and white-outline rear sights came on my 30S. (Glock offers Trijicon night sights as an option.) To adjust for windage, move the rear sight in its transverse notch in the slide.

The 30S trigger arrived with the standard 5.5-lb. connector installed. As usual, however, when I measured the trigger pull using a Chatillon scale, the weight came in higher: 6 lbs., 7 oz. 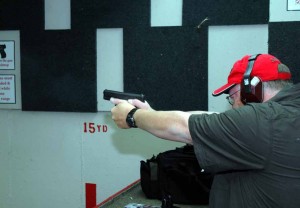 I was fortunate to have the aid of my friend Ted Murphy to help with the evaluation and shooting at the range. I brought my original Glock 30 for comparison.

Both of us found a not-inconsequential difference in felt recoil between the two pistols. My notes from the day: “The 30S … is unpleasant to shoot by comparison to the model 30.” Murphy commented that shooting the 30S felt as if were a pocket gun, while shooting the 30 felt quite similar to shooting his full-sized Glock 21SF. He explained that “pocket pistol” was his short-hand for the felt recoil he experienced with numerous polymer and steel subcompact 9mm pistols. 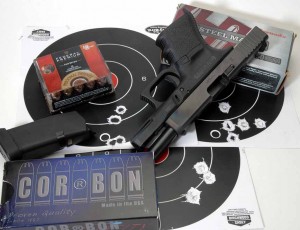 Murphy’s target results with the 30S.

I also shot the 30S over a Crony Master chronograph (at 300 feet above sea level with an ambient temperature of 61 degrees F). The five-shot averages:

We agreed the SF grip on the 30S feels much better than the older 30 grip, and that it should offer better concealment. Lacking a proper holster, I did a quick and dirty evaluation by wearing each gun around the house with the gun tucked into my belt. The 30S felt better and more comfortable. I draped a denim shirt over the setup and didn’t see much, if any, difference in concealment but, given the nature of law enforcement surveillance dress and body locations, any reduction in size is a plus.

When considering the new Glock 30S and my original Glock 30, and the purpose for which they were created—i.e., concealed carry—I’d go with the 30S. But I’d make sure I used the softest shooting ammo I could find for any extended practice. If my concealment needs were not so demanding, I’d stick with my original 30.

Bottom line? Both of these Glocks are good for concealed carry and personal defense.