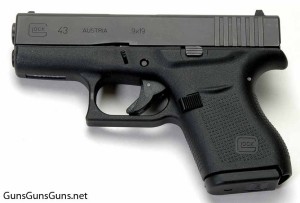 The .380 ACP-chambered Glock 42 debuted in 2014 amid both cheers and boos. Some critics declared that although the 42 was great for concealed carry, its caliber and magazine capacity (six rounds) remained insufficient for self defense. It should’ve been chambered in 9mm, they added, with a higher magazine capacity.

The gun-buying public didn’t see either issue as a deal breaker, because the 42 sold and still sells well. Of course, it wasn’t much of a stretch to think Glock might have a 9mm version already in the works, and it did: This year Glock introduced the 43, a 9mm, slightly larger version of the 42 (read our in-depth review of the 42 here).

I obtained a 43 from Glock for testing and evaluation, and my review follows.

The 43 features time-tested Glock features such as the Safe-Action trigger, three safeties, construct, appearance and disassembly/reassembly method. There are differences, though. In face, save for five parts, there’s no other commonality of parts with other Glock pistols. The differences have given rise to an unofficial designation of the two guns as “Gen4.5” Glocks (more on this below).

The gun holds six rounds in a staggered Glock-design polymer magazine, with cartridge witness holes numbered 2–6 on the magazine’s rear face. Two mags come with the gun. One mag features a flat base plate and the other a finger-rest extension. A magazine loader comes with the gun, too, although we didn’t need it at all to fully load the six rounds.

The slide features a blackened nitration finish and rides on four metal rails embedded into the polymer frame, which is also black. Glock used the same metal nitration treatment on the blackened, hexagonal-rifled barrel. The 43 is striker-fired and operates on a short recoil system, with the barrel hood locking into the large ejection port window. 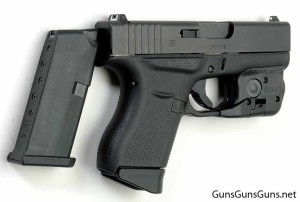 The author’s 43 from the right with the Streamlight TLR-6 laser attached, and both the flat baseplate and finger-rest magazines.

The 43 employs a captive dual recoil spring system. The white-dot front sight is pinned into the slide, and the square-notch outlined rear sight is in a dovetail cut (and therefore adjustable for windage corrections).

The external spring-loaded extractor is center-right of the port. The extractor is also a loaded-chamber indicator, with a chambered cartridge forcing the extractor outward at its front so you can see or feel it. The slide features six vertical grasping grooves rear of the ejection port.

On the slide’s left (facing away) you’ll find the following markings: a large capitalized “GLOCK” with a capital “G” encircling the rest the word, followed by “43,” “AUSTRIA” and “9×19.” On the right, the serial number is stamped beneath the ejection port.

The firing pin safety plunger is inside the slide, and it’s rectangular and larger in shape than the one used in Gen4 models. It’s beveled on its contact surface. The retaining plate features faint horizontal grooving.

All gripping areas of the frame are pebbled in the manner of Gen4 Glocks, but the pebbling pyramids are more subdued. There’s no rail for mounting a light or laser, but you can still add one (more on this below). Two cross pins hold the trigger assembly to the frame.

The front strap is pebbled. The trigger guard is squared and horizontally grooved on its face, with a slight hook to its front. Both features help shooters who hook their support-hand finger or fingers around the guard in a two-handed shooting grip. (Speaking of shooting grip, while I was barely able to get all three fingers around the grip with the flat baseplate magazine, the addition of the finger rest made all the difference in getting and keeping my full grip.) The backstrap is slightly extended at its bottom, and Glock added a dished-out undercut to the trigger guard’s bottom rear.

Worth noting: The 43’s frame molding seams are almost fully flush to the frame. In contrast, I often find the seams more prominent on other Glock models, and in the grip area they often grow annoying if I’m doing lots of drawing and/or shooting because my off-hand index finger rubs on the seam.

The areas beneath both bulges and above the grip’s sides are smooth for roughly 1″, with horizontal ridges running front to back on the bottom. Individually or in combination, they create a slight finger- or thumb-rest guide. In addition, the left-side bulge is enlarged just enough to form a barrier beneath the frame-mounted, horizontally-grooved slide stop to deter accidental activation. The reversible magazine release and left-side-only slide stop follow those of the Gen4 pistols.

The backstrap beavertail features a slightly curved upward lip, and the backstrap’s lower end extends enough below the magazine mouth to almost (but not quite) cover the flat base pad’s rear. The frame is shortened on the other three sides to surround the flat plate, while still allowing getting a slight hold on the pad. A groove and an interior interlocking plate hold the base pad in place. The magazine is metal-lined within a polymer shell, and the magazine follower is polymer.

The grooved-face trigger is best described as abrupt because it breaks while you increase trigger pressure. Trigger reset is short. Using a Chatillon trigger pull gauge, I measured the trigger pull rate from 7–7.5 lbs. (Factory specs say ∼5.5 lbs.)

Basic take-down and reassembly follow the standard Glock routine, but going deeper differs due to the changes in this “Gen4.5” pistol. For instance, at first glance the trigger setup looks similar to that of other Glocks, but it’s not. The new Glock Armorer’s Manual includes the following caution in a gray box on p. 117: “In general, disassembly of the trigger spring is not recommended.” I was told instructors also point this out in all the armorer classes. Bottom line: If you want to go beyond standard disassembly/reassembly, take a Glock armorer’s course or have a Glock-qualified armorer instruct you on the changes in the 43 (and 42).

The pistol ships in Glock’s familiar lockable, hard-sided, cushioned case, which also contains the two magazines, a nylon brush, a polymer cleaning rod, a trigger lock and an owner’s manual.

At the range, the 43 didn’t produce the recoil other guns of this ilk do. We shot Winchester (White Box) Personal Protection 147-grain JHP, Remington UMC 115-grain JRN and Liberty Ammunition’s Civil Defense 50-grain JHP ammo. Recoil was mild, and the amount of muzzle lift seemed influenced more by how we gripped the gun than its caliber. 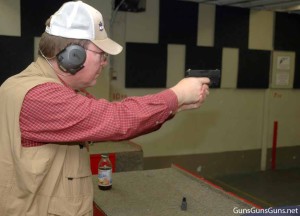 The author’s son shoots the 43.

I chronographed the Winchester and Remington ammo, but having only 20 rounds of the Liberty ammo, I had few options for evaluating it. I could chronograph it or shoot it for groups, or my associates and I could all have a taste of it by shooting a few rounds. I went for the latter. Fortuitously, Liberty’s Web site lists chrono results that say the 50-grain JHP fired from a 43 will achieve a velocity of 2,028 fps. For us, the Liberty ammo produced mild recoil and was accompanied by a loud report, a large ball of flame and minimal muzzle lift.

My chrono results, which I obtained at 85 degrees F, 300 feet above sea level:

Overall, the only problem I had was making a clean trigger pull because the trigger breaks at 7–7.5 lbs., as noted above. A shooter might overcome this hefty pull if that were the only challenge, but in addition, the striker usually releases just as you apply peak finger pressure (although this was inconsistent). Trigger reset and trigger over-travel were typical Glock. (Note: For those anticipating installing a Glock 3.5-lb. connecter, the bad news is it won’t fit, and if forced in, it would swell the trigger mechanism housing, which then wouldn’t fit in the frame.) 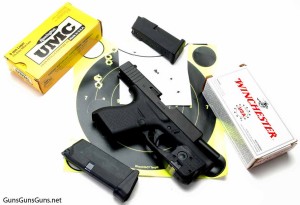 The author’s target results with the 43.

Because I had difficulty managing the trigger, I achieved only one decent five-shot group at 10 yards using the TLR-6 laser/light Streamlight sent me for evaluation. I placed four rounds into 1.75″, but the last one was out, making the final group 3.5″. My son Walt M. managed a five-shot group of 2.5″, and he did so one-handed and standing, using factory sights.

Now a word about the Streamlight TLR-6 laser/light, which Streamlight makes specifically for the 42 and 43. First, it’s not eye-catching because it blends very well with the pistol’s finish, having the same color, surface texturing and possibly even the material found in the Glock frame. The TLR-6 features a rectangularly-shaped profile with rounded corners, and you activate each one of its three options—light only, laser only, both on—by pushing one of the two rubber buttons, one on each side of the unit. For the three of us, the buttons were within our finger-reach without any grip shifting.

The unit is a two-piece design, and you clamp its body to the gun’s dust cover using the three supplied mounting screws. Two stacked 1/3 N batteries power the TLR-6. The unit never shifted or came loose when we shot the gun.

Our collective assessment of the 43 is the same we found with the 42: low recoil, and comfortable to hold and shoot. It’s a borderline pocket gun due to its increased size, although it will work very well in other concealment modes. I’m sure it will be a gun of choice for the IDPA Back-up Gun Class, in which the size and caliber of handgun is limited.

The 43 remains competitively priced, and I think its 9mm punch makes it a better choice than the 42 and its .380 ACP chambering, if you can handle the increased recoil.

Bottom line: The 43 is yet another welcome addition to the world of Glock.