The Heckler & Koch P30 is a modern police and security pistol that combines function and safety. Available in 9 mm and .40 SW, with ergonomic features include a special grip frame with interchangeable backstrap inserts and lateral plates, allowing the pistol to be individually adapted to any user. Ambidextrous controls include dual slide releases, magazine release levers. Variants with a conventional double-action/single action trigger have a serrated decocking button located on the rear of the frame. 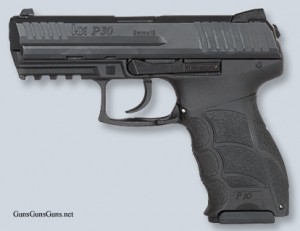 A picatinny rail molded into the front of the frame allows mounting lights, laser sights or other accessories. An advanced loaded chamber indicator positively indicates a loaded chamber. The P30 has a self-decocking, double action hammer with a firing pin block safety that eliminates the need for a manual safety.

Not all variants available in some regions.