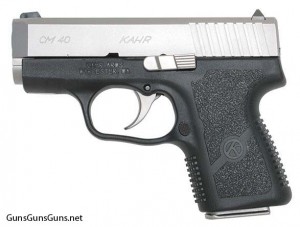 The CM40 has the same external dimensions as the PM40 and is also chambered in .40 SW. It’s built on a black polymer frame with 4140 steel inserts molded into the frame in the front and back for added rigidity and strength. The CM40 slide measures only .94″ wide and is machined from solid 416 stainless steel with a matte finish.

The differences between the CM40 and PM40 include the following: 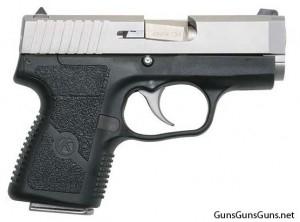 The CM40 from the right.

The cocking cam trigger system employs a patented cam to both unlock the firing pin block (a passive safety) and complete cocking and releasing of the firing pin. Kahr says the system provides a safe-cam action and smooth double-action-only trigger stroke. The offset recoil lug and the trigger bar attachment allow Kahr’s barrel to fit low in the frame, and since there is no hammer, the shooter’s hand can ride up the grip. The CM40 does not have a magazine disconnect or double-strike capability, but it does carry a drift-adjustable rear sight and a pinned-in polymer front sight featuring a white bar-dot configuration. Finally, the slide does lock back after firing the last round.

The CM40 will start shipping to wholesalers and dealers in March 2011.