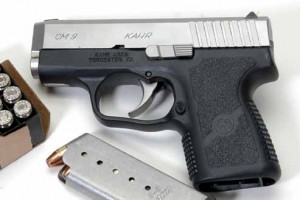 Kahr Arms pistols have a reputation of being extremely well made, dependable and accurate. They have an excellent double-action-only trigger and are easily concealed. Unfortunately, all these good points come at a cost, which historically was reflected in the guns’ MSRP. This was a turn-off for many, often rightly so, for if you simply can’t afford it, it doesn’t matter how great the product is. That said, I also found some who didn’t argue about the price in terms of value; they just didn’t see a good reason to spend that much money for something they thought they would probably never need. They just wanted some sort of basic handgun “just in case.”

I have good news: The Kahr pistol reviewed here—the CM9—is essentially a Kahr PM9 that has undergone some changes to result in a lower suggested retail price. The CM9 lists at $517 (catalog model number CM9093), which compares favorably to the Kahr PM9’s MSRP of $786 (catalog model PM9093).

The question: What are these changes, and, most importantly, do they affect the excellent reputation established by Kahr’s original P-series pistols?

First, Kahr Arms’ engineers have figured out how spend less machine time on each gun. For instance, the CM9’s slide lacks the rounded edges found in the higher-priced model, substituting angled but flat machine cuts to achieve no-snag surfaces. The muzzle features a series of inward sloping cuts to allow easy reholstering. The top of the slide now is not rounded but is an angle-flat machine cut. Also, the curved artistic line on both sides of the slide are gone. All are good examples of how small changes can affect cost but not function. 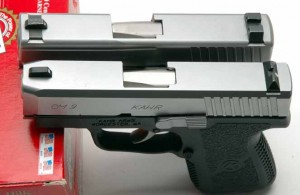 Note the small differences between the CM9 (bottom) and the PM9 (top).

The barrel is now conventionally rifled, not polygonally. The sights have gone from metal to polymer, with the front sight now pinned rather than dovetailed into the slide. The rear sight remains dovetailed into the slide, however, and is windage-adjustable. It’s well worth noting that, while the front sight is pinned in, two staking pins are used to doubly ensure it stays put.

Other changes include the following:

In overview, this genre of Kahr Arms pistols—be they in calibers .45 ACP, .40 SW, 9mm or .380 ACP—are mechanically identical. They are double-action-only semiautos based on a Browning-inspired locked-breech design. They are striker fired, with the striker partially pre-loaded or cocked when the slide is cycled (in a manner similar to the Glock Safe-Action system).

The hammerless Kahr CM9 sports a bead-blasted stainless steel slide and a polymer frame that reduces carry weight. The slide features a large ejection port window and diagonal grasping grooves at its rear.

There are no external safeties unless you consider the 5.5–7 lb. double-action-only trigger as such. (The trigger pull weight on my sample CM9 measured 7 lbs.)

Pistols sold in California have a frame-mounted manual thumb safety and a loaded-chamber indicator. 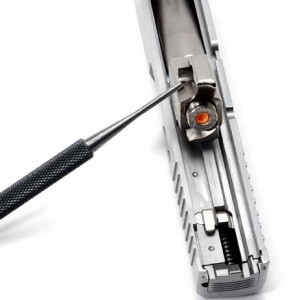 The offset barrel lug allows the barrel to sit deep in the frame.

Internally, the CM9 has an internal firing pin safety that’s activated when you pull the trigger. There’s no magazine disconnect safety, nor a second-strike capability. You must reset the striker to re-fire the pistol.

The ramped front sight features a white dot, while the rear square notch sight offers a vertical white bar beneath the notch.

A patented external, spring-powered extractor is at the lower right side of the port. According to Kahr, the extractor is “specially designed so that powder residue is forced away from the extractor. It’s designed [so] that it employs the slide to limit its movement so that failures to extract are nearly impossible.”

Within the slide is the patented offset barrel. The barrel lug is off center, which places the trigger assembly beside the barrel lug. This allows the slide to sit deeper into the frame, which then moves your shooting hand up higher and closer to the center bore line for better recoil control.

The slide assembly is held to the frame with the horizontally-grooved slide stop lever located above the trigger area and within thumb-reach for most hands, as is the vertically-grooved magazine catch, which is at the lower rear of the ample trigger guard. The curved trigger is smooth-faced.

The slide travels on four steel inserts in the frame; two are top rear, with two more inside the dust cover. The purpose of the grooves molded into the frame is simply to aid installing the slide on the inserts.

The polymer frame has impressed checkering on the front and rear gripping areas, and the frame sides are lightly stippled. The checkering pattern on the CM9 covers a slightly different area than that on the PM9.

According to Kahr, the magazine is made using corrosive-resistant, 400-series stainless steel heat-treated to 50 Rockwell hardness. The tube is plasma-welded and then tumbled to remove burrs. Also, a steel slide stop pin insert in the top left of the polymer follower is employed to minimize wear on the follower.

The CM9 magazine holds six rounds and features inspection holes on either side of the magazine body. A flat removable metal base plate is present. Kahr supplies one magazine with the gun. For those who wish to have a spare mag, Kahr sells them for $44.

The extractor on all Kahr Arms pistols is self-cleaning.

A dual recoil spring system is employed, and I was curious when a shooter might need to change it due to regular firing use. The manual doesn’t mention it, so I contacted Kahr Arms and the rep told me the company’s engineers generally recommend replacing the spring system every 2,000 rounds unless you use +P ammo. If you shoot +P heavily, change it every 1,000 rounds.

For cleaning and inspection, read and follow the directions provided in the supplied instruction manual. Pay particular attention to how to re-install the slide stop, which is clearly explained. If you don’t do this correctly, it’s possible to lock up the gun so badly it will have to go back to Kahr Arms for them to get it apart. (No, I didn’t do that, but I came close once!)

Some noteworthy information regarding the Kahr design: The company holds patents on the cocking cam, the striker and the manner in which the trigger attaches to the trigger bar. Also, when the gun is apart, you can better see the clever repositioning of the feed ramp and the barrel underlug to the left of the bore’s center line, allowing the trigger draw bar to lie flat against the right side of the frame. This arrangement decreases slide and frame width.

During my handling and shooting of the CM9, I very much liked the soft recoil, but I thought the gun felt more muzzle-heavy than usual. Then I realized it felt this way because I can only take a two-finger grip. And yes, a finger-rest base plate such as the Pearce Finger-Rest base plate sold by Kahr Arms will allow a three-finger grip. But Kahr doesn’t recommend installing one on the CM9’s magazine. I did try one and the gun balances much better. But with this part installed, when the magazine is fully seated there’s a gap between the finger rest and the frame—just enough to pinch a finger. 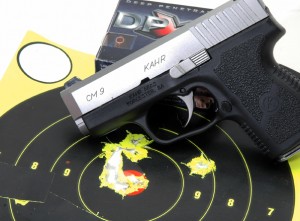 Typical target results at 17 yards with the CM9.

Range work showed me a new wrinkle. Previously, most every Kahr I’ve shot would settle down after fewer than 50 rounds. This time, I had to run more than 100 before the gun cycled correctly.

That said, a friend of mine, after shooting this sample, bought one. He reports that after more than 350 rounds, he hasn’t had, nor has he been able to create, a malfunction, and he said he worked at trying to do so, firing it with odd grips and with the gun inverted every which way.

Groups ranged from 2″–4″ inches, depending on distance and my ability to not jerk the trigger. As far as concealed carry, Kahr Arms offers a good line-up of concealment holsters.

Historically, I’ve not been a fan of the genre of micro-compact semiautos, regardless of caliber, for although the market demands smaller and lighter guns, the laws of physics haven’t changed. Such small handguns are more sensitive to changes in how, and how firmly, you hold the gun. The full-size versions of such pistols have more allowance inherent in their construction, not only for incorrect gripping, but for variations in ammunition and for declining spring strength due to use as well. Small guns work and work well if ongoing attention is given to these variables.

Of course, the need or desire for a highly-concealable handgun can well outweigh any of these concerns, and the Kahr Arms CM9 pistol certainly fits the bill. After all, owning an ideal set-up is of no use if you don’t have it with you when you need it!