Rating: 9.0/10.
Users’ Rating (Click a star to rate this gun.)
Rating: 5.7/10. From 244 votes.
Please wait...
Summary: Walt Rauch’s review and rating of the Kahr Arms P380 pistol, including a range report, numerous photos and specs, and user ratings and comments. (Click here to see all of Rauch’s handgun reviews.) 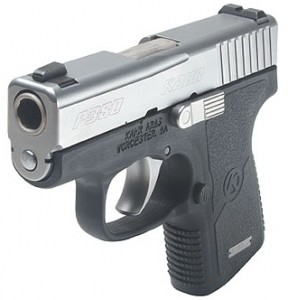 In the arena of self-defense handguns, pocket pistols are compromises for those who want to be able to defend themselves but, due to social constraints, must be discreet. The compromises include choice of action type (revolver or semiauto), caliber and, most importantly, weight and thinness (or lack thereof).

Fortunately, we have a surfeit of choices today, especially in ultra-light pocket autos chambered for 9mm and .380 ACP. In this article, I review the P380 from Kahr Arms, a semiauto subcompact chambered in .380 ACP.

The sights are dovetailed into the slide, which is nicely beveled. Click to enlarge. (Photos Walt Rauch)

The P380 holds six rounds in its magazine plus one round chambered. It‘s the logical end of what all began with Kahr Arms’ first model, the K9, which morphed into an extensive line of smaller and larger “P” models with steel or polymer frames and chambered in 9mm, .40 SW and .45 ACP.

The P380 features a bead-blasted stainless steel slide and a black or pink polymer frame. The standard model features a matte finish on the slide, but the Black Rose Edition sports a polished stainless slide with custom engraving. A California-compliant version (i.e., the model with a loaded-chamber indicator) is also available.

You can get the P380 with standard bar and dot sights (which is what I received and tested), night sight inserts or Crimson Trace Laserguards. The P380 sights are dovetailed into the slide and are drift adjustable for windage. The sights are well-shaped and snag-free. (My prior experience with Kahr Arms night sights found them to be equally good, by the way.) 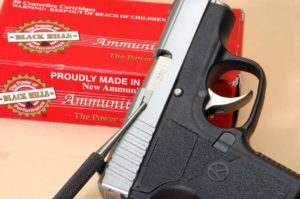 The extractor also serves as a loaded-chamber indicator.

The Kahr design is a striker-fired, semi-double-action semiauto of John Browning origin, with a locked-breech design. The P380 is hammerless and is striker fired, with the striker partially pre-loaded or cocked when the action is cycled, similar to other semi-autos such as the Glock Safe Action system. As such, the pistol is quite safe to carry with a chambered round, particularly when you consider its long, just-under-6 lb. trigger pull. Also, the P380 has a passive, slide-mounted striker safety which blocks the striker firing pin from contacting the loaded cartridge until you pull the trigger completely rearward. (A misfire cannot be re-struck unless the slide is retracted at least half of its length, resetting the firing mechanism.)

The P380’s squared, stainless steel slide rides and moves on four steel inserts—two in the top rear of the frame, and two inside the frame’s dust cover. There are two external controls, the slide catch and magazine release, both on the left side of the frame in the conventional positions. Both parts are beveled, as are the other appropriate locations on the gun, eliminating sharp edges. 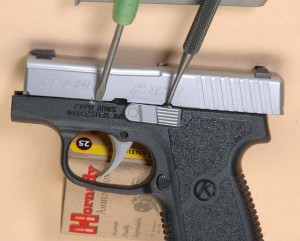 Aligning these very faint tick marks is necessary for disassembly (left), while the slide stop must be aligned with a circular notch in the slide (right).

Breaking the P380 down for service is simple. After verifying the gun is unloaded and the magazine is out, line up the two vertical indicator marks—one on the slide and one on the frame. Then, while holding the two marks aligned, press the right side of the slide stop to the left. The slide stop is in tight, and for the first dozen or so times I did this, I needed to use a non-marking hard object to do this pressing.

With slide stop removed, I find I need to fully pull and hold the trigger while removing the slide. Next, slightly compress the dual recoil spring and remove it. Then push down on the top of the exposed chamber to drop the barrel down so that it can then be removed to the rear.

Re-assemble the gun in reverse order, with this cautionary advice: Follow the instruction manual’s directions on how to position and then install the slide stop. If you do it wrong, you might lock up the gun and have to send it back to Kahr Arms to get it apart without damaging anything. 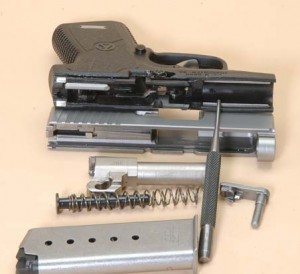 The P380 has a single-column steel-body magazine with a removable polymer base plate, which also serves as a finger rest and is easily removed for cleaning. The steel body features four “witness” holes on either side. The polymer follower has a steel insert in its top-left forward corner. This insert bears against and operates the steel slide stop and prevents wear on the follower that would otherwise occur with steel against polymer.

The P380 features the same impressed checkering found on Kahr’s other polymer-frame Kahr Arms pistols on the frame’s front and rear gripping areas, as well as light stippling on the sides of the frame’s gripping area.

Kahr Arms holds patents on the cocking cam, the striker and the manner in which the trigger attaches to the trigger bar. You can see this when the gun is apart. The feed ramp and barrel underlug have been moved to left of the center line of the bore, which allows the trigger draw bar to lie further inward and flat against the right side of the frame. Also, to improve functioning, the extractor has a hole in its center to further permit any debris build-up to fall away or to be blown out from beneath the extractor claw as the extractor articulates during the firing cycle. 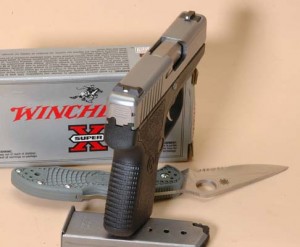 The backstrap features impressed checkering. You can see the sights well in this photo, too.

The P380 weighs 13.5 oz. loaded with seven rounds of Black Hills 90-grain JHP, exactly the same as my Smith &Wesson Model 642 revolver when loaded with five rounds of Remington 125-grain JHP ammunition. Both guns fit nicely in the front pants pocket of my EOTAC lightweight operator pants in their respective DeSantis Super Fly pocket holsters. In outline, both guns occupy the same space.

My sample P380 carried a ramped front sight with a white dot and a square-notched rear sight wearing a vertical white bar beneath the notch. Both sights are dovetailed into the slide for horizontal sight adjustment if necessary. 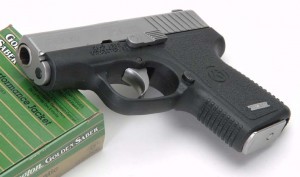 The well-shaped trigger guard helps in firing, as does the checkered frontstrap.

This sample’s sights were regulated such that I shot at or slightly below point-of-aim at 15 yards when using the outline of the front sight. But when I centered and leveled the white dot on the front sight in the rear notch, I made center (point-of-aim) hits. While doing this with a good assortment of ammo, I also established that the P380 functioned with all of it without any malfunctions.

That said, I did find one quirk: When attempting to chamber a round from a fully-loaded magazine with the slide locked back by depressing the slide stop, the nose of a hollow point stubbed on the barrel feed ramp. A slight bump to the slide was all that was needed to fully chamber the round. Conversely, if I retracted the locked-back slide, this didn’t happen.

Also, this problem only occurred with aggressively-designed hollow point bullets; those that more closely mimicked the shape of a JRN bullet, such as Remington and Cor-Bon PowRBall, fed without hesitation. None failed to chamber when the slide was pulled fully to the rear or when shooting multiple rounds. 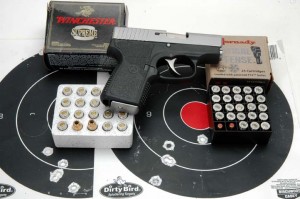 I also found I very much enjoyed shooting the P380, a reaction I do not have with most of the other new ultra-light .380 and 9mm semiautos. 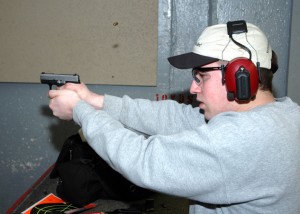 There are some negatives to relying on such a small, lightweight semiauto, though. For one thing, these small handguns are sensitive to how firmly the gun is held. You must hold the frame to ensure the slide’s momentum is fully expended in moving the slide as briskly and as far to the rear as is possible.

Also, with a long finger it’s possible to depress the magazine catch when the trigger is pulled. With large hands, the slide runs into the web of the firing hand, stopping the slide from moving. One-handed firing helps for some, but for others a larger gun is the only answer.

All that said, the need or desire for a highly-concealable handgun can well mitigate some of these problems when you simply can’t carry larger gun regularly.

In addition, the P380 continues to reflect the Kahr Arms history and practice of quality. It does cost a bit more than others of the same genre, but I see a Kahr as well worth the increased cost, particularly if you plan on regular practice. I say this because, while I like and own similar polymer pocket guns such as the Ruger LCP and multiple Kel-Tecs, the P380 is the only one that doesn’t give me the hand sting I routinely experience with other subcompact semiautos. (In fairness, I also avoid ultra-light revolvers and magnum loads!)

While I occasionally do carry my Kel-Tec or Ruger LCP, I only shoot them enough to stay proficient with them. The P380 often goes to the range just for fun.