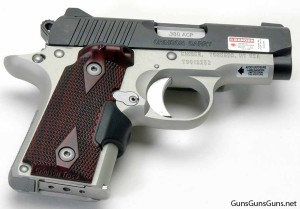 The author’s Micro Crimson Carry from the right.

Kimber based its Micro-series pistol design on the 1911 pistol. Chambered in .380 ACP, the gun well lives up to its Micro label because it’s definitely small. In addition to following (in part) the 1911’s make-up, the Micro also follows the 1980s-era Colt Mustang Pocketlite pistol in its appearance and operation.

I obtained a Micro Crimson Carry (MCC) from Kimber, and my review of that gun follows. (For descriptions and photos of the other Micro Carry guns, scroll down below the Specs section.) 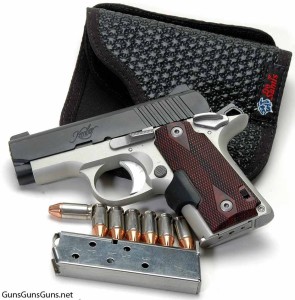 The MCC is a recoil-operated, closed-breech, single-action semiauto pistol. It operates via a modified Browning lock-up of barrel to slide, with the stainless steel barrel having one annular locking lug and the barrel chamber hood abutting the breech face. The MCC measures 4″ tall, includes a 2.75″ barrel, weighs 13.4 oz. with an empty magazine, measures 5.6″ long and holds six rounds in the magazine. Three magazines ship with the pistol.

The MCC’s slide is finished in matte black, and the receiver is brushed aluminum. A full-length metal guide rod holds an 8-lb. recoil spring. Safety devices include a left-side thumb safety, a sear disconnect, a firing pin block and a hammer safety notch. The MCC doesn’t include an accessory rail.

Both front and rear sights are windage-adjustable in their dovetail cuts. The solid aluminum pivoting trigger features a grooved and curved trigger face. Kimber lists the factory setting of its trigger pull weight as approximately 7 lbs.; my sample gun’s trigger broke at a clean 6.5 lbs. The smooth-faced frontstrap is high cut behind the trigger guard to afford a higher grip if desired. The beavertail grip features a wide and high tang. 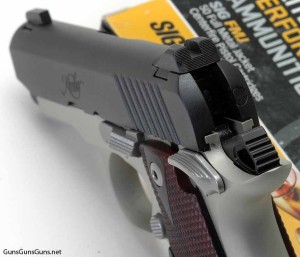 This photo shows the blacked-out sights, the hammer in the beavertail notch, and the thumb safety’s ledge.

Externally, the controls (i.e., the thumb safety, slide stop and magazine catch) are positioned in the usual 1911 frame positions: thumb safety top rear, slide stop above the rounded trigger guard and magazine catch at the guard’s lower rear. The controls aren’t reversible. The slide stop tab is checkered, and the top of its right end is reduced so that it protrudes just enough (and no more) for you to move it for disassembly. (Kimber performed this reduction—usually a custom touch—to help prevent accidental disengagement.)

The slide stop is retained to the frame by a horizontally-elongated, U-shaped spring, which opens rearward and lies within a recess in the frame where it’s secured by its upper leg. The spring is bent at a right angle so that its tip fits into a hole within the recess. Important: Take care not to dislodge it!

The magazine catch features six vertical grooves on its round face. The lengthwise, well-grooved, and curved thumb safety moves firmly and positively. You can manipulate the slide with the safety in the on position. Note: Per page 60 of the Owner’s Manual,

“Once the slide is removed, DO NOT engage the safety into the “ON” position. Doing so will cause the thumb safety detent plunger to spring out from the frame. The plunger is under spring tension and can fly out with enough force to cause serious injury or property damage. Wear eye protection when disassembling and reassembling (see page 25).”

I did this incorrect action when I reviewed the Colt .380 Mustang, and spent more than an hour or so finding the scattered parts.

The frontstrap and most of the backstrap are smooth save for the removable, rounded and finely-checkered mainspring housing, which is also rounded at the bottom rear to help keep your clothing from snagging on the grip.

The front sight features a horizontally-grooved face, and the rear sight has the same. The rear sight is shaped to follow the lines of the slide’s rear. The MCC’s slide, including the sights, is blackened (as noted earlier), and it features a bead-blast finish, as does the frame. The large ejection port allows ample room for ejection of empty or live rounds. Seven diagonal grasping grooves begin behind the port. The gun features an internal, right-side extractor and a rebounding firing pin.

When you cock the oval-shaped, grooved, commander-style hammer, it moves into a large notch in the grip tang, the size and shape of which should prevent most any cut or nip of your shooting hand. A non-captive spring travels on a round-headed metal guide rod. Kimber recommends changing this spring every 1,000 rounds and more often if you shoot +P ammo. In addition, you should replace the mainspring and firing pin springs every 5,000 rounds.

The Crimson Trace Lasergrips attach to the frame via torx screws, two to a side. The lasergrips are attractive and feature a great fit-to-frame. 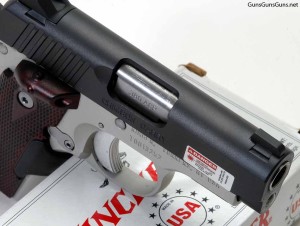 The plated-and-polished-steel magazine fits flush in the slightly-beveled magazine well. It features a removable floorplate Kimber has drilled and tapped for adding a base pad. Its front tip extends slightly past the front of the frontstrap, which provides a means of tugging on it if it doesn’t want to come out. The magazine also features a closed, curved follower. A cartridge-positioning dimple is on top of the follower. The magazine includes six inspection holes on either side of its body, with “KIMBER” and “.380ACP” stamped on its lower left face.

The pivoting aluminum trigger is grooved on its curved face. A slide-mounted firing pin lock is present, and removing it entails removing the fixed rear sight; however, doing so should prove unnecessary for any normal cleaning. The firing pin lock is always engaged unless depressed by pulling the trigger, which moves a vertical bar (beneath the left grip stock) upward, also moving the ejector upward to depress the firing-pin-lock plunger. Slide movement allows the lock to re-engage. 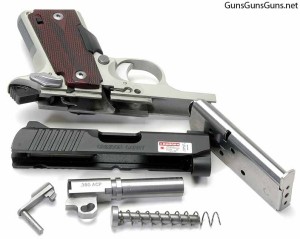 Within the frame lies the movable, left-side-mounted ejector. You must rotate the ejector down enough for the slide to clear it during reassembly. You don’t need to depress it during slide removal because the slide moves it down sufficiently for this action. Overall, disassembly and reassembly proved uneventful. 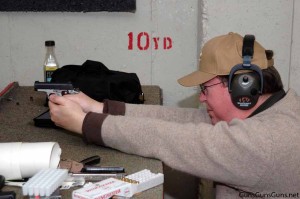 My son and I worked with the MCC at a local gun range, and we suffered no malfunctions over the 160 rounds or so we fired, which included Federal American Eagle 95-grain JRN, Hornady 90-grain Critical Defense HP/XTP, SIG Sauer 90-grain V-Crown JHP and Winchester White Box 95-grain JRN ammo.

We fired the MCC over a Pro-Chrony chronograph at 300 feet above sea level, with an ambient temperature of 50-degrees F. We recorded the following five-shot average velocities:

We performed all our shooting, including the accuracy work, at 10 yards. For the latter, we used the standard sights first, and the five-shot groups all came in at 3–5″. Then we tried the Crimson Trace laser sight, and laser dot was almost perfectly aligned with the sights. Shooting using the laser, we achieved spectacular results. Most of the time, we placed nearly all (if not all) our shots into one ragged group!

The aforementioned high-cut frontstrap does provide a more room the grip the pistol, and on this short a grip, every little bit helps. However, for my son and I (who both have large hands) it remained a two-finger grip pistol, which presented a problem when trying to shoot for photo groups in which consistency in manipulating the pistol remains critical for good results. But helpfully, the beavertail’s wide and high tang also aids gripping as well as mitigates felt recoil.

In review, the Kimber Micro is ahead of the old Mustang Pocketlite in the following ways:

Also, the backstrap’s butt is curved, the mainspring housing is checkered and the magazine well slightly beveled. Finally, the magazine’s construction is the equal if not better than some magazines used on full-sized guns made for hard use.

I particularly like that the magazine’s base plate has some forward lip to it, as noted earlier, because it aids in pulling out a stubborn magazine. I also found the longer magazine of the original Colt Government Model would fit and function in this sample. (For what it’s worth, the Colt slide also went on the MCC, but I did not attempt to fire the result.)

I’ve carried and used a 1911 for most of my (now long) adult life and still do, and I see the Kimber Micro Crimson Carry as an excellent defensive pistol for concealed carry, if a proper holster is used or the pistol is not carried cocked with a round chambered. 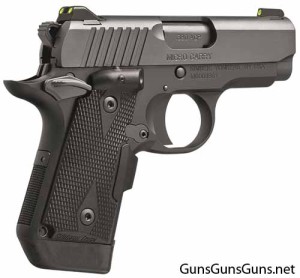 The Micro Carry DC with Lasergrips.

Micro Carry Advocate: Features include a left-side thumb safety, a checkered backstrap, a matte black finish on the slide, a brushed aluminum finish on the frame, tritium three-dot night sights, an extended magazine and either purple or brown G-10 grips.

Micro Carry Stainless, Two-Tone and all-black: Features include a left-side thumb safety, a checkered backstrap, either a matte black finish or a satin silver finish on the slide, either a matte black finish or an anodized finish on the frame, black notch and post sights, a flush-fit magazine and either smooth/checkered rosewood grips, checkered rosewood grips or black rubber grips. 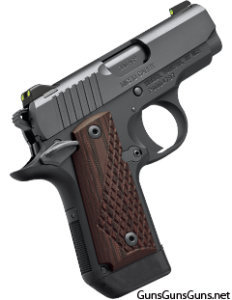 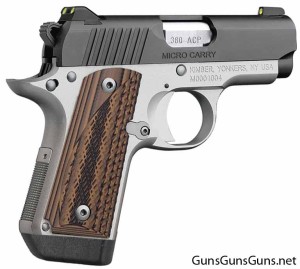 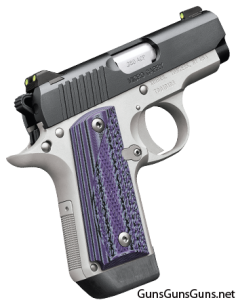 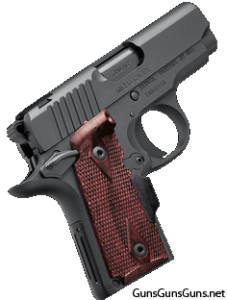 The Micro Carry RCP from the right. 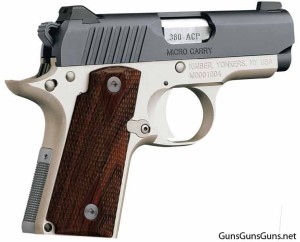 The Micro Carry Two Tone from the right. 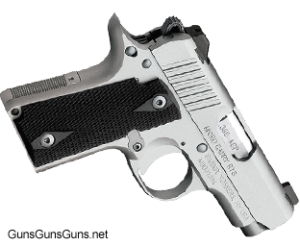 The Micro Carry Stainless from the right. 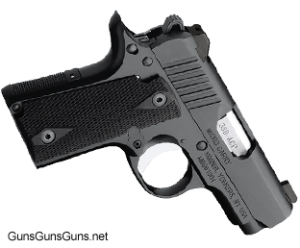 The Micro Carry in all black.