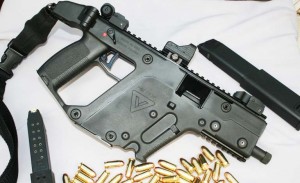 The Vector SDP from the right.

There’ve been numerous watershed moments in the history of firearms. Naturally, the invention of the Paterson revolver by Sam Colt and the Volcanic repeating pistol from Smith & Wesson were earthshaking at the time. John Browning gave us the M1911A1 pistol and its corresponding .45 ACP cartridge. Gaston Glock turned the handgun world on its head with the G17 and its polymer frame.

For the past couple decades, however, you can see that most new handguns are simply a derivative of an existing model. Consider all the M1911 format guns available from a plethora of gun makers. They have new sights, grips and finishes, but these guns are essentially the same designs that have been around for 100 years.

Enter KRISS USA and its line of machine pistols and submachine guns. If you follow firearms history, you know most machine pistols and submachine guns operate with either an open bolt and straight recoil operation, or a delayed blowback and a reciprocating slide. Most every modern firearm uses some kind of recoil spring aligned with the barrel, and the recoil inertia moves back toward the shooter.

In contrast, KRISS has patented and developed a carbine, submachine gun and pistol that employ what it calls the Super V recoil system. The Super V system directs the recoil downward. When the gun fires, the bolt moves rearward then down against the stout recoil spring. A fresh round is stripped from the magazine, and the bolt is driven back up and forward. The Super V design has proven both simple and extremely effective during not only semiauto but select fire/full-auto mode as well.

In this article, I review the KRISS Vector SDP .45 ACP pistol. 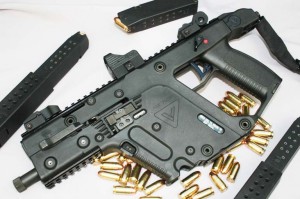 The Vector SDP from the left.

The Vector SDP pistol is essentially a citizen version of the sub-gun. It’s large, to be sure, but the trade off is a handgun that holds 30 rounds of .45 ACP ammunition. Speaking of ammunition, all KRISS firearms are chambered in .45 ACP and can be fed with a standard Glock 21 13-round magazines, or the KRISS-modified 30-round versions. Why Glock magazines? Simple: They’re reliable, readily available and relatively inexpensive to manufacture compared to other all-steel stick magazines.

This gun is built on a black polymer frame. The steel pieces feature a parkerized finish.

The Vector SDP’s outward appearance is certainly unique. The pistol grip is separate from the magazine well, which is located in front of the trigger guard and Super V action. A large/wide ejection port is located up front on the right side of the frame. An ambidextrous safety lever is located above the trigger, and the magazine-release button is recessed into the frame on the left of the gun.

Because there’s no slide to operate, the Vector SDP employs a charging handle located on the left sight of the frame along the barrel axis. The handle doesn’t reciprocate and folds down against the side of the gun when not in use. 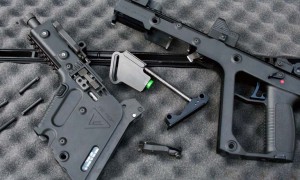 KRISS has installed M1913 picatinny rails atop and underneath the barrel. Each Vector SDP ships with flip-up/fold-down, fully adjustable iron sights. The end user can install any optic they desire, of course. For this review I installed an Insight Technology MRDS. The bottom rail would be a logical place to install a white light or light/laser combination.

The Vector SDP features a 5.5″ barrel that comes with a threaded muzzle. The semiauto Super V action is technically a delayed-blowback. When empty, the Vector SDP weighs 5.8 lbs., and it measures 16.75″ long overall.

Although it looks futuristic, the Vector pistol is a marvel of engineering simplicity. The pistol’s body is actually a two-piece design, and you can disassemble it without tools by simply removing four pins. The Super V action breaks down into only two basic components for cleaning and lubrication, and you can’t reassemble the gun incorrectly. If you inadvertently insert the bolt backward, the gun won’t go back together.

Semiauto firearms can be finicky eaters, so to test the Vector SDP’s appetite I took along several different .45 ACP loads for my range sessions. Ammunition included FMJ practice loads from Black Hills, controlled-expansion loads from Double Tap and Winchester, and a specialty frangible load from International Cartridge Corporation.

In steps one and two I chronographed each load, and then I benched the gun for accuracy testing. The results:

The average speeds were what I would expect from the each load fired through a 5.5″ barrel. The pleasant surprise came when I began to slowly put rounds on paper. As you can see, every load was able to cluster five rounds into groups below 2″ from 25 yards. The number one performer: the Black Hills load with a stellar .8″ group. The others weren’t far behind. If would seem that the hefty weight, a fixed barrel and a good trigger all combined to make the pistol consistently accurate regardless of the ammunition fired through it. 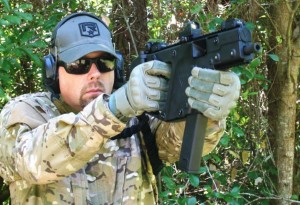 The author ran roughly 400 rounds through the Vector SDP.

I had co-witnessed the iron sights and the MRDS red-dot optic. However, for the follow-up shooting drills I folded the sights down and simply used the red dot. I conducted dynamic drills while moving forward, rearward and engaging multiple targets on cardboard and steel.

While engaging the steel targets inside of 20 yards, I used the I.C.C. frangible ammunition exclusively. The compressed copper bullets turn to dust when they strike steel and targets can be engaged safely inside of 5 yards. I wouldn’t try that with 230-grain ball ammunition because the jacket fragmentation spalls in all directions.

During the testing period I fired somewhere in the neighborhood of 400 rounds through the gun. All of the ammunition cycled reliably. Both the 13- and 30-round magazines fed the gun without issue.

Bottom line: As long as the shooter does their part, the gun will put the rounds on target.

The KRISS Vector SDP pistol is certainly unique and not necessarily for everyone. It’s not a concealed carry gun to be sure. But for its given purpose—i.e.,delivering large .45 ACP bullets on target with reliability and precision—the Vector SDP gets high marks.