Rating: 7.0/10.
Users’ Rating (Click a star to rate this gun.)
Rating: 6.3/10. From 79 votes.
Please wait...
Summary: Walt Rauch’s review of and rating for the MasterPiece Arms MPA30SST-A pistol, including a range report, photos, pricing and specs. (Click here to see all of Rauch’s handgun reviews.) 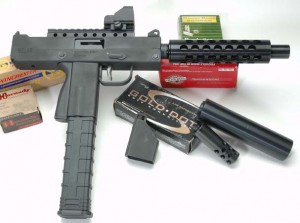 The MasterPiece Arms (MPA) 30SST-A is the newest legal-to-own semiauto rendition of the gun designed by Gordon B. Ingram and offered for sale through the Military Armament Company (MAC) and five or more succeeding firms. To avoid a lengthy, detailed explanation of all the derivations of what has come to be known as a MAC or MAC-10, suffice to say the original version was a submachine pistol with folding wire stock and chambered in .45ACP, 9mm and .380 ACP.

The MAC was also made in semiauto-only configuration, without the folding wire stock or optional sound suppressor (supplied at additional cost). The semiautos were at first made such that the pistol fired with its bolt held to the rear by its sear. Shooters released the bolt by pulling the trigger. However, this setup was quickly found to allow the illegal but easy conversion of the pistol to fully automatic fire, so its manufacture was prohibited by the U.S. government.

The MAC in its original configuration was not successful save for its use in the film industry as the gun of choice for many villains and good guys, all of whom typically used it in a spray-and-pray manner, not really hitting anyone or anything in particular.

My sample MPA 30SST-A (code for a side-operated bolt, picatinny rail and threaded barrel) is the latest and most refined version of the legal MAC handgun. My review follows.

The 30SST-A’s closed bolt is operated by a good-sized, easy-to-operate horizontal cocking handle on the receiver‘s left side. When closed, the bolt is telescoped forward over the rear of the barrel, which aids in creating this compact arm. Cases eject from a large, right-side ejection port. 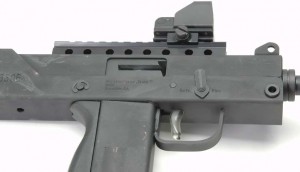 You must rotate the safety 180 degrees to actuate it.

My sample (chambered in 9mm) arrived with a STEN magazine. Later I also received MPA’s new 30-round polymer magazine, ventilated safety extension, thread protector and muzzle brake. (Note: The MPA instruction manual regarding the STEN lists a magazine capacity of 30 rounds. While technically incorrect—it holds 32 rounds—by down-loading it to 30 rounds, cartridge feeding improves. The magazine catch is at the lower rear back of the pistol grip and is easily operated with either hand. Both the STEN and the polymer magazine took their 30 rounds without difficulty when I used the supplied magazine loader.

Construction of the MPA30SST-A blends CNC machining for its bolt with stamped and folded sheet metal for upper and lower receivers. The wing-protected post front sight and the triangular-aperture rear sight, also stamped sheet metal, are welded to the receiver. Later I added the Insight Technology MRDS Mini Red Dot Sight, locking it on the 5.5″-long Weaver accessory rail pinned to the top of the receiver. 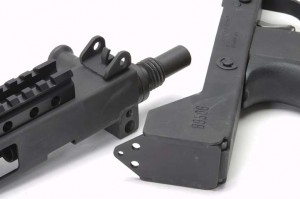 The grooved, 180 degree-rotation manual safety is on the upper right side of the receiver. It’s a bit awkward to use, though. For a right hander, you must either release your shooting grip or use your support hand. Left handers must use their off hand.

The curved trigger (protected with a stamped and welded-on trigger guard) broke cleanly. The long trigger pull is smooth and measured 6 lbs. The trigger is encased in a polymer tube that serves to minimize trigger slap, which I did encounter with the original MACs but not with this gun. My associate, A.J. Stuart, did notice some slap but said it was more annoying than painful. As a matter of fact, the only pain we both experienced was when the sharp edge of the trigger guard dug into our shooting hand.

To disassemble the 30SST-A (after ensuring the gun is unloaded!), remove the dual pin-in-a-pin from the lower receiver and remove the upper receiver. Next, compress the bolt against its dual springs and lift it out. You must cock the hammer to do so. (Make sure to check the instruction manual.) 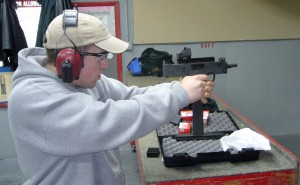 I have to admit, I had some preconceived notions before shooting this gun based on shooting a few of the originals in both full-auto and semiauto some five decades ago, but most of those notions turned out to be incorrect. Back then, I found they would only run with FMJ round-nose ammunition and did not lend themselves to any level of accuracy, partially due to the open-bolt design.

Well, that’s all changed because this version employs a closed bolt, as noted earlier. Now my only difficulty was in how to best steady the gun from a shooting rest with the 30-round vertical magazine in the pistol grip. The simple solution: Stand up and shoot, at the cost of not getting tight five-shot groups.

We shot a variety of ammo two-handed, standing, at 15 yards. The accuracy results listed below are averages of five, five-shot groups. The velocities are five-shot averages on a Gamma Master Chrony chronograph 10 feet from the muzzle: 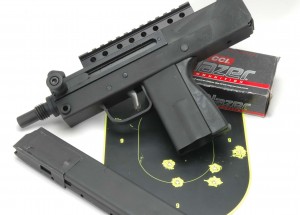 Our groups were as good as our ability to use the fixed sights. At 15 yards, they were just fine for me, shooting to point-of-aim. My accuracy results were more than adequate with them and further improved after I added the Insight Technology MRDS Mini Red Dot Sight.

Our only problem was a good one: We shot up every round of 9mm we brought, including some of Stuart’s lead IDPA reloads—just shooting for fun! And we had no malfunctions, I might add.

Now to the oft-asked questions: What’s the purpose of such a gun? Why would anyone want to buy one? My answer: Harmless enjoyment shooting a firearm can be, and often is, an end unto itself.

Yes, the MPA can be used for self defense. It hits all the high points of a defensive arm: It’s reliable, accurate, has good balance, is easy to use yet safe to handle, and the 30-round magazine supplies more than enough rounds. But shooting for the sake of shooting is just fine, too.

Note: The MPA30SST is American made and comes with a lifetime guarantee.