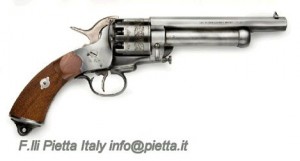 The Le Mat Army from the right.

The Le Mat revolver was designed by Frenchman Jean Alexandre Francois LeMat for the Confederates during the U.S. Civil War. Pietta has re-created this nine-shot revolver with an additional single-shot barrel.

All models feature an octagon steel main barrel, a round single-shot barrel and hand-checkered walnut grips. Various finishes and engravings are available, too. 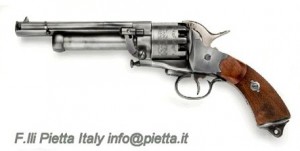 The Le Mat Army from the left.