Rating: 7.0/10.
Users’ Rating (Click a star to rate this gun.)
Rating: 7.7/10. From 27 votes.
Please wait...
Summary: Walt Rauch’s review of and rating for the Rohrbaugh R9 pistol, including a range report, photos, pricing, specs and user ratings. (Click here to see all of Rauch’s handgun reviews.)

After the 2009 debut and huge sales of the Ruger LCP (Light Carry Pistol) chambered in .380 ACP, a number of companies scrambled to construct similar subcompacts. Aside from one, that is: Rohrbaugh, Inc., which had already long been been working to bring its R9 subcompact semiauto to full production.

I see the R9 pistol as an evolutionary outcome of the Seecamp pistol design. For me, seeing and handling the R9 is like running into a long-not-seen friend who, while having changed, remains the same likeable individual. To beat this analogy a bit more, closer inspection reveals some surgery and modification Rohrbaugh did to improve on the original Seecamp design. 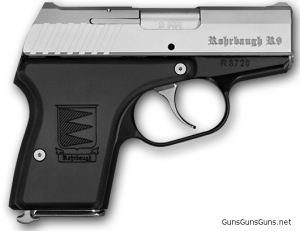 Three decades ago or more, Larry and Leander Seecamp developed their all-steel, subcompact, double-action-only pistol, which caught on with many who wanted and needed a very small but effective pocket auto. For me, the Seecamp replaced my Colt .25 ACP model N, my .380 ACP Walther PPK and my .38 Special J-frame S&W revolver, despite the fact the Seecamp was first chambered only in .25 ACP. (Fortunately, a .32 ACP chambering quickly followed the .25). My Seecamp became the gun to carry when I believed I wouldn’t need a gun.

Fast-forward to 2009. The Rohrbaugh R9 very much resembles and draws from the original Seecamp design with the additional benefit of packing 9mm. The R9 follows the Seecamp in overall shape, with a flush-fit spurless hammer, double-action trigger and a heel-release magazine catch. (More on this catch later.)

Important: The R9 comes with an ammunition restriction, a warning of which is stamped into the side of the two six-round magazines supplied with the gun. The warning? Don’t fire any +P or +P+ 9mm loads.

Another caution or advisory is found in the instruction manual: Change the outer spring of the dual recoil spring system every 200 rounds. Not surprisingly, this dual spring system is the same as the one patented by Seecamp. (The patent has expired.) 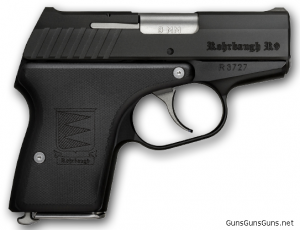 The R9 uses a locked-breech design holding 6+1 rounds in its all-metal magazine, which has a removable base plate. Sights are optional—the R9 doesn’t have them, and the R9s does. When included, they are minimal—a ramped front sight and square notch rear, milled as part of the slide. Any sight adjustment would have to be performed with very judicious filing, although given the gun’s size and purpose, doing so should not be needed. The R9 slide has seven diagonal grasping grooves at its rear and has a good-size external extractor and a large ejection port opening.

At press time, the R9 comes in three versions: the Standard, Stealth and Stealth Elite. The first features a natural-colored stainless steel slide and darkened aluminum frame. The Stealth features a black slide coated with Diamond Black slide coating. The Stealth Elite has a Diamond Black slide coating with the sides sanded by hand to reveal the stainless silver color. According to the Rohrbaugh website, “..materials are quality stainless steel, 7075 aircraft aluminum, G-10 grips and Wolff springs … (and) the trigger, magazine release and extractor are glass beaded.” 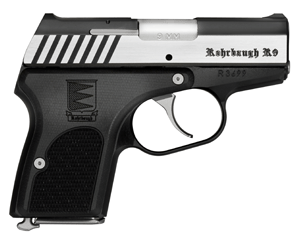 No surface metal work is present on the grips because, according to the Rohrbaugh literature, the R9 “is ergonomically designed to work seamlessly with the human body to point naturally … keeping the wrist and forearm in line. The design of the grip is also designed to push the recoil to the center of the palm, thereby reducing felt recoil.”

The R9 lacks a slide catch and uses a cleverly-designed magazine heel release, as noted earlier. I found I have to move it straight back to get the magazine out rather than simply “rolling” the catch, and the catch is contoured to aid in doing so. There’s much to recommend a heel release for a pocket pistol because, in my experience, the chance of me not-so-accidentally moving a heel release is less than hitting one behind the trigger guard.

While technically the R9 has an exposed spurless hammer and pulling its trigger raises and releases it from a recess in the rear of the slide, you can’t cock the hammer into single-action mode. The R9 has a large, rounded and smooth-faced curved trigger and trigger guard, and I was able to fire it with a lightly-gloved hand.

The R9 trigger pull weight out of the box measured 7 lbs. and still weighed this after testing. Also, as is normal for such small semiautos, if you have large hands and long fingers, you’ll find your trigger finger bumps up against the frame before the trigger releases. (A two-handed hold just increases this irritant.)

Another irritant: Having your trigger finger hit by the forward inner face of the trigger guard during recoil. This is tolerable—for a few rounds. Don’t plan on a day of shooting at your gun club with the R9. 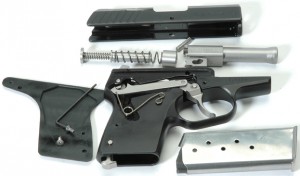 To disassemble, remove the frame-held headless cross pin by lining up a hole in the slide and, while holding the slide in place, remove the cross pin with anything that fits the pin hole. (You might want to experiment by placing something between the back of the barrel and the breech face so that you don’t have to fight the dual recoil springs while performing this operation.)

The R9 follows normal disassembly up to the removal and re-installation of its dual recoil spring. Per the instruction manual, which uses photos to illustrate its directions, “(a)fter removing the magazine and ensuring its chamber is empty, grip gun with your left hand. When the pin is lined up with the hole, hold the slide in position with your left hand … Push the pin out.” With the pin out, you can remove the slide.

To re-assemble the gun, just reverse the process. But the how (per Rohrbaugh) of removing and re-installing the dual recoil spring system is different, as noted by the following excerpt from the instruction manual: “This system must be assembled as shown to operate properly. Using a pair of channel-lock pliers, grab the recoil system by the front end cap and by the base of the small collar, which is where the outer recoil spring’s end rests, and carefully compress the spring. Then insert the complete recoil system into the barrel/slide assembly as shown, releasing the pliers. The slide assembly is now ready to be put back into the frame.” (A large vice grip worked for me.) 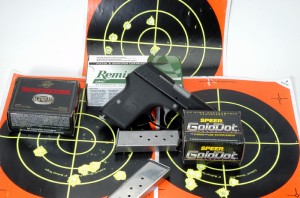 In my shooting efforts at 10 yards, I found good hits and groups were almost exclusively dependent on how well I was able to smoothly move the long, 7 lb. trigger. The sight picture is no better or worse than on many larger pistols, and the DA trigger pull is smooth. Simply due to the very short sight radius, you can’t afford the slightest “twitch” while making the shot. When I did my part, the hits went to my point of aim.

My results improved on my second visit, during which I shot wearing Uncle Mike’s padded shooting gloves (the R9 delivers brisk recoil) and reading glasses, and positioned myself directly under the indoor range’s fluorescent lights. My results:

My first session lacked the above preparation and I was all over the place, scattering hits with no consistency. To the good, the R9 functioned well with 140-grain PERFORMANCE MATCH Jacketed Flat Point Cor-Bon, a bunch of 115-grain JRN from Black Hills, Magtech and Winchester, along with 124-grain JHP/XTP Hornady and 135-grain JHP Federal Personal Defense loads.

During the first range session, the gun began to fail to close and needed oiling. On the second go-round, I had two failures to fire when the slide and barrel did not lock shut. I think the gun was telling me it needed its outer recoil spring replaced (as noted above). Between the two sessions, I know more than 200 rounds went down range.

In review, the Rohrbaugh R9 pistol is not cheap, with quoted prices running north of $1,000. It does provide a level of quality and service more than adequate for self defense. Simply put, some folks can afford and want to have what’s perceived to be the top-shelf product. The R9 fits this niche quite well.