Rating: 8.0/10.
Users’ Rating (Click a star to rate this gun.)
Rating: 6.3/10. From 336 votes.
Please wait...
Summary: Walt Rauch’s review of and rating for the Ruger LC9 pistol, including a range report, photos, MSRP and specs, and user ratings and comments. (Click here to see all of Rauch’s handgun reviews.) 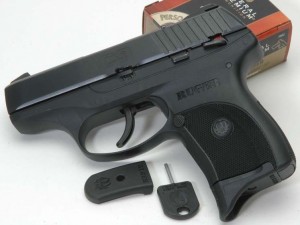 The LC9 from the left.

Saying the Ruger LCP (Lightweight Carry Pistol) chambered in .380 ACP was a success in the pocket handgun market is, if anything, a great understatement. At its unveiling at the 2008 SHOT Show, Ruger wrote 87,000 orders on the first day of the show, exceeding the entire forthcoming year’s production. Demand remains strong today.

Sales of the new LC9 in 9mm are also strong, and it too was well received at this year’s SHOT Show, albeit without the almost-hysterical crowd of two years ago. No doubt this was affected by a still-contracting economy as well as still quite strong sales of the LCP pistol. (A nice “problem” to have for any company.)

The “why” of this wellspring of demand for such a lightweight pocket pistol far exceeds the space allotted here, but suffice to say there was and still is an itch, and Ruger (along with other handgun manufacturers) is supplying the scratch. 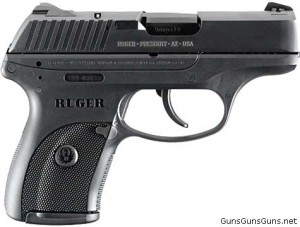 The LC9 from the right.

It’s apparent many buyers think the LCP’s caliber meets their needs. Not everyone holds to this belief, however; those so disinclined include law enforcement officers and others whose daily lives are accompanied by the quite real possibility of having to use a firearm for self defense. They, as well as others not so strongly challenged, view the 9mm cartridge as the lowest-powered round for self-defense situations.

Ruger confirmed this line of thinking regarding the 9mm caliber through the Ruger Voice of the Customer program. According to Ruger CEO Michael Fifer, “They (those responding) wanted an LCP chambered in 9mm. They have it now in the Ruger LC9.” 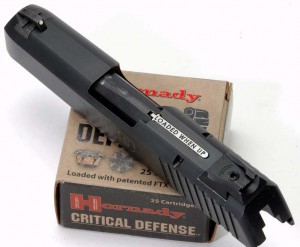 The locked-breech LC9 semi-auto is double-action-only (DAO) and hammer-fired, with its external hammer fitting into and flush with the rear of the slide. It’s constructed of polymer and steel and weighs 17.1 oz. with an empty magazine. The LC9 measures 6″ in length, 4.5″ in height and .9″ thick. It sports a 3.12″ barrel.

Its overall appearance follows on the LCP while being slightly larger and holding one more round (7+1). The frame-stamped LC9 serial number is visible in a countersunk opening at the top of the right grip panel.

The LC9 has windage-adjustable sights mounted in dovetail cuts in the slide; the rear sight is further secured with an allen screw. The wide (1.63″) square-cut rear sight notch with two white dots on either side, when combined with the 1.25″ single-dot front sight, allows for coarse but very quick sighting, which is, more often than not, all you’re going to get when using such a handgun for self defense. The sights are large enough to provide a good sight picture, even for ageing eyes. (Note: Ruger now also offers the LC9 with the LaserMax Centerfire laser sight or the Crimson Trace Laserguard laser sight, both of which attach to the frame/trigger guard. —ed.)

The loaded-chamber indicator is up.

The slide is made of through-hardened alloy steel and the barrel is alloy steel; both have blued finishes. Its glass-filled nylon frame is colored black. Two coil springs, one within the other, are non-captive on a polymer guide rod. A centrally-mounted loaded-chamber-indicator is at the rear of the slide. It’s thoughtfully marked “loaded when up” and, when so raised, displays red epoxy paint on either side.

Barrel lock-up occurs via the chamber hood abutting into the large ejection-port window. A passive firing pin safety is also in the slide. A pivoting external extractor is located at the lower right rear of the port. Eight wide diagonal grasping grooves occupy almost all the space on the slide from the rear of the ejection port to the back of the forward angled rear of the slide. The slide is nicely tapered at its muzzle and along its bottom edges. 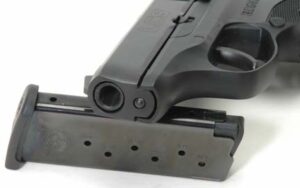 The LC9’s muzzle and magazine.

These inward curves abut matching tapered edges at the top of the frame. This metal frame insert provides a base to contain various operating parts, including slide rails. The insert is held by two cross pins at the front and rear of the frame. A third and upper rear pin holds the semi-exposed spurless hammer.

The slide catch is located on the frame’s left side, centered above the grip area. The thumb safety is partially grooved and when down or off safe, it exposes a red oval on the frame showing the pistol can be fired. When up or on safe, a white oval on the frame is exposed and visible. The safety was easy to use and moved in a positive manner, both on and off safe. 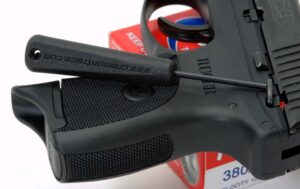 The non-ambidextrous magazine catch at the lower rear of the good-sized trigger guard is vertically grooved on its pressing surface. The takedown plate is forward on the frame; it covers the takedown pin.

The slide locks open on an empty magazine and the external slide stop is easy to reach and manipulate for positive firearm functioning. The LC9 has a magazine disconnect, which means you can’t fire the pistol unless the magazine is fully seated.

The seven-round, single-column magazine has a metal body with six cartridge witness holes on either side numbered 2–7. Its follower and removable base plate are also made of the glass-filled nylon substance. A finger-grip-extension base plate is also supplied. Adding the finger-grip base plate allowed me to get a three-finger grip on the gun, compared to using the flat base plate, which only allowed me to have a two-finger grip. The LC9 ships with one magazine. 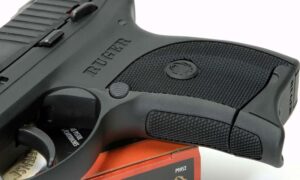 The front strap is checkered, and the magazine extension provides extra grip room.

The frontstrap, backstrap and the lower two-thirds of the side panels wear closely-spaced checkering. In the top quarter section, the frame curves inward lengthwise from the trigger guard back to the backstrap. The backstrap is also shaped such that the web of my shooting hand is well under the area of slide movement. For me, and probably for others as well, this eliminates the possibility of slide bite. All these grip features combine to allow the user to take and maintain a good grip on the gun. The trigger is hinged, smooth-faced and curved, and on this sample measured 8 lbs.

The LC9 has an internal gun lock with its keyhole at the top right rear of the frame. To engage the internal lock, you must apply the manual safety, which in turn requires the pistol to be cocked. Insert one of two supplied keys into the small keyhole, then rotate the key clockwise one-fourth of a rotation. To deactivate, rotate the key counter-clockwise one-fourth of a rotation. When the internal lock is engaged, the trigger will move freely and will not function. 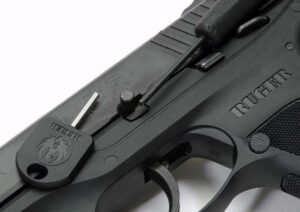 To disassemble, after ensuring the gun is empty and the magazine removed, press down on the takedown plate and, using the internal gun lock key, push out the takedown pin from the right side of the frame. (Take care doing this, for with my sample the takedown pin simply fell out when I tilted the gun.) You can now move the slide assembly forward off the frame.

Next, slightly compress the dual recoil springs on their polymer guide rod and remove. Move the barrel slightly forward, which allows the barrel to be lifted up and out rearward. Further disassembly is not necessary or advised. 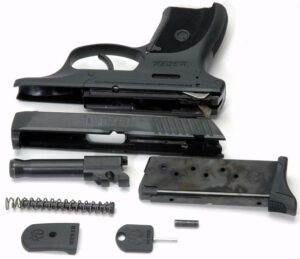 At the range, I found the LC9 performed better than I’d expected in a few areas. After firing 14 rounds of Winchester and Remington 115-grain FMJ ammo, I didn’t experience the anticipated hand stinging I’ve come to expect from shooting some (but not all) of the current crop of micro and mini handguns. My associate, AJ Stuart, volunteered to do the chronograph work using a Competition Electronics chronograph. As he finished the seventh batch of five rounds, he commented his hand began to sting on each of the last five shots he fired, which were with CCI Gold Dot +P ammunition.

Here are our chrono results:

Note: The LC9 instruction book states the gun is rated for and can handle +P ammunition, but cautions “… a steady diet of +P ammunition will shorten the endurance life …” The manual also clearly states (in red ink) “Do not use +P+ ammunition.” It goes on to explain there is no SAMMI or CIP pressure limits on +P+ and use of this ammunition could result in serious injury. While most users will not find such ammunition available for purchase (it’s only made for and at the request of some “official” agencies), keep this in mind if you’re reloading 9mm.

Speaking of reloads, another friend with us at the range had some of his 9mm reloads, which he loads to be mild. The LC9 functioned with these and as a bonus made shooting the LC9 very pleasant. (The factory warranty is, of course, void if you use reloads.)

AJ and I shot for groups at 17 yards and then a more realistic 10 yards. At 17 yards shooting indoors under fluorescent lighting while seated with arms supported on the shooting bench, our five-shot groups ranged from 2.25″–3.5″. In most defensive applications, shooter will use such a small handgun at much closer distances, but there are exceptions. Example: Law enforcement officers are often required to pass an off-duty handgun qualification test with the particular handgun they have selected for such use. Many of these courses include shooting—and hitting—at 15 yards. The reasoning behind this? Even off duty, the officer might have to engage a threat such as in a shopping mall or a large commercial establishment. 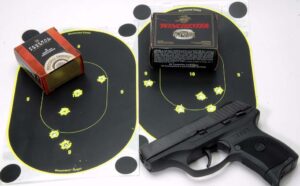 The LC9 has a long trigger pull, but the stroke was smooth enough to make the 8-lb. trigger weight manageable. The LC9 trigger action requires the trigger to run fully forward to reset in order to fire again. In essence, shoot the LC9 as you would pull the double-action trigger of a revolver.

Its sights are large enough and the rear sight notch wide enough (as noted earlier) that the resulting sight picture provides lots of light visible on both sides of the front sight, enabling you to fully use all your marksmanship skills, even in dim light. Bottom line: Shooting at 10 yards, more often than not we were able to achive under 2″ five-shot groups.

I’ve also now carried the LC9 in a front pocket of my cargo pants off and on and find I can easily and smoothly access the gun using a DeSantis Nemesis pocket holster.

The Ruger LC9 is, to me, a better choice than the LCP, not only in caliber but in a more—to overuse a phrase—user-friendly platform.