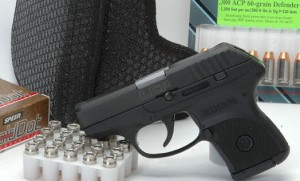 The LCP from the left.

The Ruger Lightweight Compact Pistol (LCP) is a compact .380 ACP semiauto. It’s Ruger’s interpretation of the Kel-Tec P-3AT pistol (the P3-AT name is a play on words: 3AT sounds like 380 when spoken). The LCP evokes the pocket pistols of two other gun companies as well: SCCY Industries, formerly known as SKYY, and Cobra Enterprises of Utah.

I’ve gotten my hands on an LCP; my review and thoughts follow.

The LCP is double-action-only (DAO) without restrike ability. It holds six rounds in its metal magazine, which features a removable polymer base plate. The LCP weighs 9.4 oz. and measures 3.6″ tall, 5.16″ long and .82″ thick. Its barrel measures 2.75″ long.

The through-hardened steel slide is dull blue and my glass-filled nylon (polymer) frame is black.  You can also get the LCP with a stainless steel slide with a brushed stainless finish, and a wide variety of frame colors. (The NRA version features a camo frame, NRA Logos on the slide and a special serial number range (NRA000xxx). Davidsons is distributing it.). The polymer trigger is rounded and smooth faced. Trigger pull weight measured 7 lbs. out of the box, but after my shooting, it dropped to 6.5 lbs.

Sights are rudimentary: a smooth black ramp front and square notch rear. Because they are part of the slide, they’re not easily adjusted, although if for whatever reason you wanted to further regulate the sights, you could perform some very careful filing. (Note: Ruger now also offers the LC9 with the LaserMax Centerfire laser sight or the Crimson Trace Laserguard laser sight, both of which attach to the frame/trigger guard. —ed.) As best I can determine, the gun shoots to point-of-aim at 18 yards and closer.

Ruger has rounded the more abrupt areas of the pistol, as well as cleverly adding a spring-loaded slide stop on the exterior of the removable ejector while retaining this function. It’s also made the rudimentary sights slightly more pronounced while giving the front and backstrap areas a more attractive surface treatment by reshaping the frame, adding ambidextrous finger swells and lowering the magazine catch so that it’s now partially surrounded by the frame surface to better prevent accidently releasing the magazine. This protection is also seen in the added semi-circular raised ridge around the lower half of the large head of the take-down cross pin. 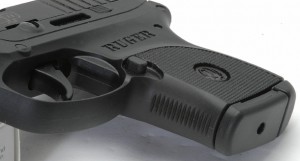 The magazine catch is protected by the frame.

The slide stop is horizontally grooved and flush-fit to the frame at the frame’s top left rear. It’s not activated by the magazine’s follower, so it won’t lock back after the last round is fired.

The metal frame is held in the polymer frame shell by two pins, and the frame provides the metal rails for slide travel as well as holding some of the operating parts. A third and upper rear pin retains the semi-exposed spurless hammer.

The frontstrap is horizontally grooved and the backstrap features molded checkering. As noted earlier, the LCP’s six-round, metal-body magazine has a removable polymer base plate, the combination of which extends the magazine below the frame. To provide a better gripping area, the hammer spring seat (a polymer insert at the bottom rear of the frame) has been made longer to match up with the bottom of the magazine. 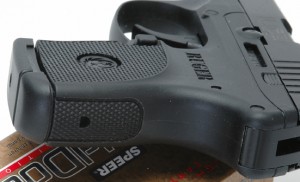 A spring-loaded Glock-like external extractor is at the right rear of the large ejection port. Ruger removed some of the rear of the barrel chamber area so you can see a portion of the cartridge case when a round is chambered and the slide is closed, creating a visual loaded-chamber indicator. Two recoil springs, one inside the other and supported by the non-captive metal guide rod, are in the usual location beneath the barrel.

After ensuring the gun is unloaded and the magazine is removed, you begin disassembly with the slide forward. (A very good reason to triple-verify the gun is unloaded!) Per the instruction book, it helps to move the slide about 1/16″ to the rear before prying out the large-head take-down pin, which is retained by spring pressure. Moving the slide makes prying the pin out easier because the pin is centered beneath the overly long slide stop notch on the slide, giving you more room to get to the pin. 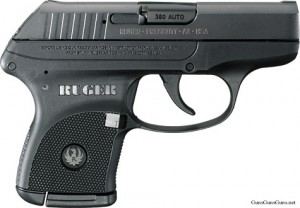 The LCP from the right.

The dual recoil springs must be slightly compressed to get them free of the barrel’s lower rear. After this, other than taking the magazine apart for cleaning, no further disassembly is recommended or necessary. 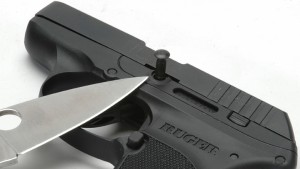 This cross pin must be removed for disassembly.

Shooting the LCP proved uneventful—it performed as I anticipated. I had no malfunctions, and my sample accommodated a decent assortment of .380 ACP bullet types, weights and velocities.

My first act was removing the factory-applied heavy coating of gun grease from the LCP’s rails. While such heavy lubrication helps ensure a gun will work right out of the box (particularly an unfired lightweight gun), this isn’t how the gun will be lubed in real use. Most of the carry guns I’ve had cause to examine are, if anything, under lubricated, usually to avoid staining your clothing. I re-lubricated the LCP with a very light coat of Mobil 5W30 motor oil and, at the range, fired two magazines worth of ammo into the backstop to see that it did work and how well or not I was able to manage the gun. 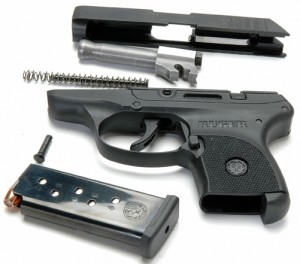 I then shot to establish a level of accuracy. Shooting at 18 yards indoors, seated, using a gun-bag rest, I placed five rounds of Hornady 90-grain JHP/XTP ammo into a 2.5″ (sort of) group. “Sort of” because the sights are hard for me to see clearly under indoor lighting.

Later I chronographed the LCP outdoors with the ammunition listed below without malfunctions. I used a Chrony chronograph at 300 feet above sea level with an ambient temperature of 43 degrees F. The velocities listed are five-shot averages:

I shot mostly one-handed. With a two-hand grip, I found that sometimes I drove my the tip of my trigger finger into my support-hand palm due to the small grip and had to re-grip the gun to fire it.

The gun is not unpleasant to shoot a little, but gets downright uncomfortable for me after more than 20 rounds or so. 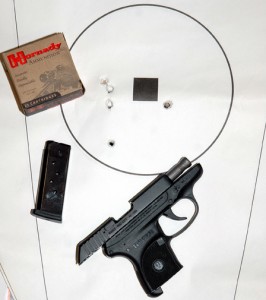 I had some Kel-Tec accessories on hand (but not a P-3AT pistol), including the metal belt “holster” clip and the lanyard loop attachment, and I thought they might work on the LCP. No luck here, though, because the LCP’s various retaining pins are in slightly different locations than those of the P3-AT and P32 pistols. I did find that a Kel-Tec .32 ACP magazine locks into the Ruger LCP, so the two in .380 ACP might interchange.

Pocket holsters from Galco, Alessi, High Noon, Gould and Goodrich, and DeSantis all took the LCP, with the DeSantis Superfly model a perfect fit.

The LCP is a very easy to conceal and carry handgun, as I inadvertently rediscovered. At one one point while writing this article I wanted to check something or other on the LCP, so I went looking for it in all the usual places. As I was failing to locate it, I finally realized where it was—in my back pocket!

With Ruger adapting and producing this model under the Ruger label, the LCP receives Ruger’s reputation of offering quality, durable low-cost firearms, which are in turn backed by top-notch customer service. I also think the LCP helps re-legitimize the .380 ACP caliber for self defense, as well as advance the use of a small, lightweight semiauto for this purpose.

Bottom line: The Ruger LCP is an excellent representation of the polymer and steel genre of pocket semiautos.

Note: The LCP is not approved for sale in California or Massachusetts.

Check out Walt Rauch’s review of the LCP’s sibling, the LC9. 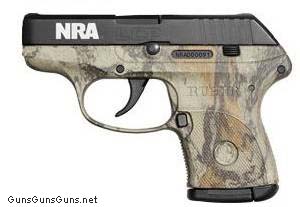 The NRA Special Edition, from the left. 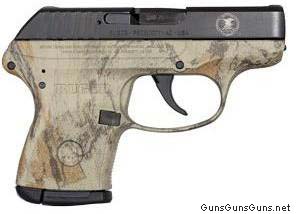 The NRA Special Edition, from the right. 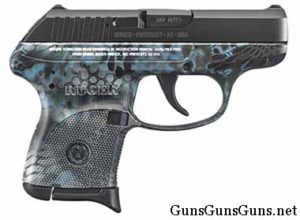 The LCP with the Kryptek Neptune-colored frame. 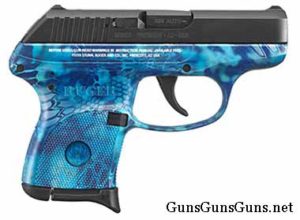 The LCP with the Kryptek Pontus-colored frame.