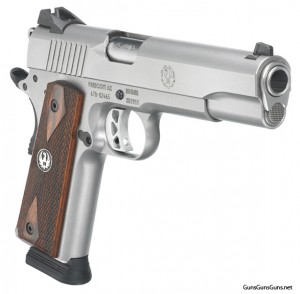 Without question, the 1911 pistol is the most copied and imitated pistol of all time. It has served as springboard for other designs, grown and shrunk, and been rendered from various types of weight-saving materials. Various manufacturers have tinkered with its innards, hoping to create a better mousetrap.

Some of these variants have filled a useful niche, but most have proven inferior to the original. Like most pistoleros, I own and shoot many different types of handguns, but I always come back to the 1911, and the ones I favor don’t deviate a great deal from the original Browning design.

Ruger’s new SR1911 meets this description. Although the SR1911 isn’t really “new,” Ruger does this pistol right, which is far more important.

Ruger has actually been at the 1911 game for some time. Ruger turns out major components for other firearms companies and has been building the frames for one highly regarded manufacturer of 1911s for several years. Would a totally Ruger-built 1911 have some appeal? The powers-to-be at Ruger thought so.

The SR1911 is a full-size 1911-style pistol chambered in .45 ACP and crafted of stainless steel that embodies many classic features. The slide is crafted from bar stock, as is the barrel, while the frame is cast. There was once a notion that a cast frame is somehow inferior to a milled one, but it really hasn’t played out that way. 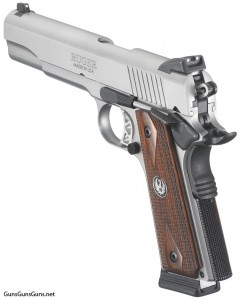 Casting makes for very precise tolerances and low manufacturing costs. It also allows a manufacturer to do things that would prove impossible or too costly using other methods. Example: The plunger tube on the SR1911 is integral to the frame instead of staked on. On occasion, staked tubes have been known to come loose, causing all sorts of problems.

The SR1911’s external dimensions are pretty much on par with other service-size 1911s. Total length measures 8.67″ with a barrel length of 5″. The SR1911 stands 5.45″ tall and weighs 39 oz. It’s external geometry is identical to other 1911s, so holster availability and fit will not be a problem.

Traditional features include an internal extractor and rear slide serrations. The SR1911 utilizes a standard plug-style guide rod, just as John Browning intended. Dinosaur that I am, I’ve never warmed up to full-length guide rods on a 1911 that just make takedown and reassembly more difficult and offer no tangible advantage on a defensive pistol.

Likewise, a standard barrel bushing is also part of the package. The bushing’s fit was snug, but I had no problem removing it without using the provided bushing wrench.

The frame-mounted safety and slide stop are both slightly extended. A beavertail grip safety with a palm swell is also part of the mix. The beavertail prevents hammer bite, while the palm swell ensures safety deactivation should you take a hasty grip.

Sights include a low-profile Novak rear sight and front post in the popular three-dot pattern. Standard Colt dovetails are cut into the slide, and this makes fitting of aftermarket sights a snap.I, for one, was happy to see that the SR1911 does not utilize the superfluous Series 80-style firing pin safety. Instead, Ruger employed a low-mass titanium firing pin, which should eliminate an inertia discharge due to a dropped gun.

Factory specs call for a trigger weight between 4–5.5 lbs. I didn’t have a trigger scale during my informal test, but I would guesstimate trigger pull on my sample ran just a little south of 5 lbs. The skeletonized aluminum trigger features an adjustable over travel stop, and my sample had very little slack before it dropped the hammer. The hammer, too, is a skeletonized affair with an oval slot.

The flat mainspring housing is nicely checkered for a positive hold. The hard rubber stocks on my sample contributed to a non-slip grip. The black grips, along with the bead blasted grey/silver finish, help give the SR1911 a handsome, yet serious business-like appearance. (Note: The pistol will apparently ship with wood grips but also include the black Hogue rubber grips.)

Two magazines, one holding seven rounds and the other taking eight rounds, come with the SR1911. I’ll confess that the logic of different capacities is lost on me, but I’m a happy camper any time I get more than one magazine with a 1911.

Back in December, I traveled to Gunsite Academy to get some hands-on experience on the SR1911. I had the opportunity to run more than 400 rounds through the SR1911 and was able to form some opinions on the latest spin of this classic pistol.

The SR1911 did not disappoint. I experienced a single stoppage that I quickly cleared, and other than that, reliability was absolutely perfect. I fired mostly 230-grain ball loads, but my test pistol also digested a small quantity of Hornady JHPs without missing a beat.

In fast-paced combat shooting, the SR1911 really began to shine. As long as I held up my part of the bargain, I was able to place shots in the middle of the target, and my experience was hardly unique among the other two dozen writers in attendance. After giving it our best throughout the afternoon, we returned to the range in the evening and gave the SR1911 a workout in low light.

The next opportunity at Gunsite, I spent a morning shooting the SR1911 at distances ranging from arms length all the way back to 25 yards. Although I wasn’t able to perform an official accuracy evaluation, I can’t dispute Ruger’s claim the pistol can shoot 1.5″ groups at 25 yards.

My final test drive consisted of multiple runs on the man-on-man shoot-off used in Gunsite’s 250 pistol class. Again, the SR1911 rose to the occasion. I thought the trigger was especially nice for a production gun, helping me in that never ending quest to shoot straight and true.

This pistol holds little in the way of surprises but performs every bit as good as pistols retailing for considerably more. At a manufacturer’s suggested retail price of $799, it’s only slightly more expensive than imported pistols that offer far less.

I don’t think I’m going out on a limb predicting that variants of the SR1911 are not too far down the road. A blackened stainless copy shouldn’t be too hard to pull off. Compact and enhanced versions are probably also in the cards.

Thirty years ago, there was one domestic manufacturer of 1911 pistols. Frankly, I’ve lost track of the number of outfits currently bringing this timeless pistol to the marketplace, but suffice to say, it’s a bunch. To make an impact in such a competitive market, your product better be good. In that regard, the Ruger SR1911 scores well.