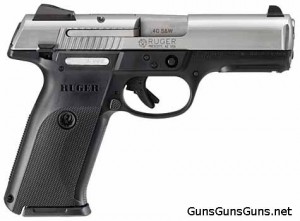 The SR40 from the right.

The original SR9 got off to a rocky start with Ruger recalling the guns almost as soon as they were introduced. It was discovered that the gun could fire if dropped, and while there were few such instances, Ruger did the right thing and fixed them all and included a free magazine for the customer’s trouble. 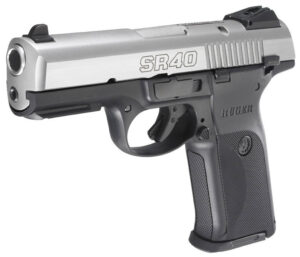 Because the SR40 is a striker-fired pistol, the bore axis is low over the hand, helping to reduce muzzle flip and offering good point-ability. This helps you get the gun on target fast, a feature that can’t be underrated in conflict.

Admittedly, I like the SR9 a lot, so I took to the SR40 quickly. Sure, I shot the .40 SW a bit slower than I do the 9mm, but this is normal and can be overcome with a bit of practice. What I would like to see is Ruger develop a compact model between the SR and the SRc series, something the size of a say, a Glock 19. I would also prefer a bit less length to the slide (over the grip tang) because I’ve found that when I draw from the holster, the web of my hand can sometimes snag at this spot (I realize this is a small thing).