Rating: 8.5/10.
Users’ Rating (Click a star to rate this gun.)
Rating: 7.3/10. From 242 votes.
Please wait...
Summary: Dave Spaulding’s review of and rating for the Ruger SR9 pistols, including a range report, pros and cons, Ruger’s specs, photos and MSRP, and user ratings and comments. (Click here to see all Spaulding’s handgun reviews.) 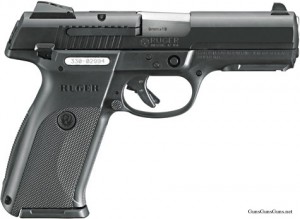 Ruger‘s SR9 is a striker-fired, magazine-fed, recoil-operated semi-automatic pistol. A tilt-barrel design keeps the barrel and slide locked together at the moment of firing, while the cycling of the slide partially cocks the striker action so it’s ready to fire the next round in the chamber. Pressing the trigger to the rear completes the full throw of the trigger bar and striker while releasing the internal striker block, which keeps the gun from firing unless the trigger is manipulated. After the round leaves the barrel, the barrel is cammed downward from its locked position, permitting the slide to reciprocate, partially cock the striker and chamber the next round.

The SR9 measures 7.57 inches in overall length, 4.14 inches in barrel length and 5.52 inches in height. A magazine-disconnect safety is incorporated into the pistol’s design, a feature many officers will dislike but others will welcome because it can function as a weapon-retention device. Noted trainer Massad Ayoob provides a number of real-world examples where ejecting the magazine while fighting over a gun has saved police officers’ lives, so I feel arguing over the value of such a device may prove counterproductive. The real problem involves lack of awareness that it’s in place, but once it’s known, it can be made part of a training regime. In the end, if you deem the feature undesirable, simply remove it.

The gun’s slide is made from brushed or black stainless steel and is nicely rounded, removing all sharp edges. Space-age black or OD green glass-filled nylon comprises the gun’s frame, which incorporates an accessory rail on the dust cover and an interchangeable back strap at the rear.

“Back strap” might not be an accurate description because it’s actually an interchangeable insert into the back strap. It’s made from a piece of solid rubber that is somewhat tacky but holds the web of your hand solidly in place. The insert is molded to replicate the curved or flat back strap of the famed 1911 pistol; it’s a one-piece unit that actually slides out of the back strap and reverses. To turn it around, simply push a pin out of the rear of the grip (which also acts as a lanyard post), slide it out, flip it over, slide it back in place and replace the pin. It takes less than a minute, and it really does replicate the feel of the 1911 pistol.

The grip’s sides and front strap are nicely checkered, along with the Ruger logo molded in the side panels. Ruger worked hard to keep the grip as thin as possible. As a matter of fact, the entire gun is quite thin, measuring merely 1.25″ in width at the thumb-safety levers, while the slide itself measures less than an inch. Yes, the SR9 has ambidextrous safety levers at the rear of the slide, much like the 1911. 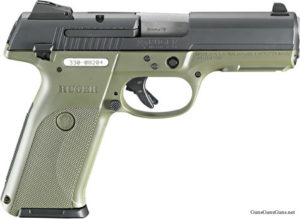 The SR9 on the olive drab green frame.

Like its .45 ACP model, the P-345, Ruger’s SR9 features a push-button magazine release that’s a big improvement over the small lever that was standard on the original Ruger semiautos. The SR9’s release button is ambidextrous, serrated and tall enough to reach easily. The magazine well is nice and large with the grip shape offering a ready-made funnel at the bottom.

The slide-stop lever is on the left side of the frame near the tip of the shooting-hand thumb. While reduced in size, it’s large enough to use as a release if you choose to. If not, you can easily release the slide by pulling back on it. Deep serrations on the rear of the slide offer a positive gripping surface.

The SR9’s sights dovetail into the slide, but differ from similar guns in that the rear sight is fully adjustable for windage and elevation. You adjust the windage by tapping the sight in the dovetail to the left or right, while you alter the elevation by turning the screw on the top of the sight assembly. The sights are of the three-dot variety. The rear sight sports a swept-back, snag-free look. 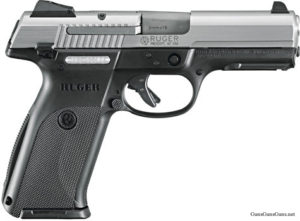 The SR9 with the stainless slide.

The trigger’s configuration is straighter than some other striker-fired guns. I like how it feels. Reaching the trigger proves easy to manipulate because of the slender grip-frame, even for those with small hands, and its flat face makes it easier to press independently to the rear. According to Ruger, the trigger should break at 6.5 lbs. with a .48″ length of travel and reset. Some will consider this break a bit long, but for police officers or military personnel the trigger action will work just fine. As a matter of fact, one could argue that the SR9’s trigger action can actually act as a deterrent to negligent discharges. Certainly the SR9 trigger is vastly superior to many of the double-action pistol triggers I’ve shot over the past decade or so.

Out on the range, I began by testing the SR9 for combat accuracy by shooting five-round groups at 50 feet. While some prefer to see a gun tested at 25 yards by placing it in a bench rest, I believe an integral part of a gun’s accuracy is your ability to work through its trigger action and still hold the gun on target. A Ransom Rest eliminates this test, and the truth is, I want to know.

I selected loads I consider some of the best currently available for defensive purposes. Here are the results:

I ended up shooting 500 rounds of various 9mm ammo through the SR9 without a single malfunction. I conclude the gun proves very reliable.

I also liked the grip angle and the way it pointed. During a number of fast-draw and multiple-shot drills, I appreciated the way the gun felt as it cleared the holster and pointed toward the target. It felt quite natural to me, with the front sight appearing just where I wanted it.

I really liked the Ruger SR9. I’m not too concerned about the whole 9mm vs. .40-plus caliber debate—I’ve come to realize handgun incapacitation power is a product of shot placement. The gun’s flat profile and thin grip are quite appealing, as is its 18-round (17+1) capacity. This is a whole lot of gun for a reasonable amount of money.