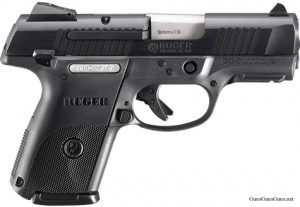 The SR9 in black.

Ruger’s SR9 semiauto was the first in a line of handguns the company calls its Hard R series of firearms. The SR9 has proved popular, but not nearly as popular as Ruger’s .380 LCP and .38 Special LCR. One is a pistol, the other a revolver, but both share common traits: They’re light, compact and easy-to-carry concealment handguns.

Ruger took note and introduced another Hard R model: the subcompact SR9c. The gun measures .75″ shorter in length and 1″ shorter in height than the full-size model, making it similar in size to other subcompact pistols. With a proper hollow point load, the 9mm can do good work, provided the shooter hits what they’re shooting at (always the No. 1 factor in rapid incapacitation).

The SR9c is more than just a chopped pistol. Ruger has enhanced a few features. The company replaced the round magazine release buttons with a D-style button contoured for better thumb placement. The trailing edge of the button is flat, which adds more engagement surface to the thumb, and, like the original version, it’s ambidextrous. Also, there are forward-cocking serrations on the slide, which some won’t like. Just forward of the serrations is a beveled edge, which gives the slide a contoured look. And the SR9 offers a loaded-chamber indicator, although I prefer to see a round in the chamber so I perform regular press checks.

Like the full-size version, the Ruger SR9c sports two manual safeties: one on the face of the trigger, the other mounted on the frame similar in location to a 1911. (I don’t engage safety levers that aren’t part of the manual of arms, so I ignore it.) The trigger safety blocks rearward travel of the trigger, so it’s engaged without thought when the gun is fired. The trigger on my test compact is superior to the trigger on my full-size SR9 and breaks right at 6 lbs.

Although the SR9c’s grip is shorter, it too has a reversible back strap that can help fit the gun into the individual shooter s hand. The SR9c comes with two magazines: a short 10-round model that can be fitted with a flat or extended floor plate, and a full 17-round magazine fitted with a grip boot, giving it the feel of the full-size SR9. Caution: A short magazine may prove problematic during a reload because the magazine can pinch the skin on the heel of the hand. You must either extend the pinky finger or curl it around the ring finger to keep it out of the way.

The SR9c performed very well on the range. I tested the it for accuracy by bench resting it at 25 yards with some of the most street proven 9mm loads. I shot five rounds each for both accuracy and velocity using my Shooting Chrony chronograph placed 15 feet from the gun’s muzzle. The average of the five rounds fired is reported below: 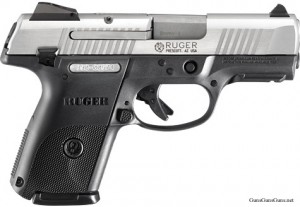 The SR9c with the stainless slide.

All of the selected ammo styles proved more than accurate for combative purposes, and, when used in rapid fire strings between three and 10 yards, all printed tight groups in the high chest region. I went on to expend an additional 400 rounds of various factory ball and reloads without a single hitch. The only problem I noted is the adjustable sights shot a foot high out of the box and needed to be zeroed, so ensure your gun shoots to the desired point of aim before hitting the street.

I think the SR9c will prove just as popular as the other models in the Hard R series of Ruger firearms. If you’re looking for a gun small enough to conceal but big enough to give you peace of mind, the Ruger SR9c is one you must consider.