You don’t have to be a cowboy to enjoy Ruger‘s new Vaquero, a Colt Single Action Army (SAA) -style revolver. You don’t have to participate in Single Action Shooting Society (SASS) events, Cowboy Action Shooters clubs or shoot any sort of cowboy match. Simply grabbing onto an SAA grip buys you a time-travel ticket on a stagecoach. The Colt SAA grip design, now found in the Vaquero, has changed little since Samuel Colt made the 1873 SAA. 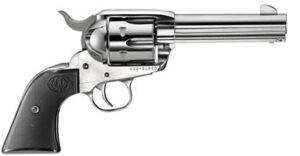 The Vaquero with a 4.62″ barrel and stainless finish.

The Ruger new Vaquero is a step back, so to speak, for Ruger single-action revolvers, because this Vaquero employs the first-generation Ruger frame—the pre-1962, XR-3 style, steel grip frame. This frame was discontinued by the late Bill Ruger, Sr., and replaced by a strengthened and enlarged frame to, as best I can determine, stand up longer to the firing of heavy .44 Magnum and .357 Magnum loads. This move obviously worked. Even now, in caliber .45 LC, ammunition manufacturers and reloading manuals specify “Ruger-Only” loads, which are too powerful for other single actions, including the original Colt.

I requested two of the new Vaqueros for test and eval purposes, and at the time, I had my choice of calibers (.357 Magnum or .45 LC) and finishes (color-case blue or stainless steel), but just one barrel length: 5.5″. (Ruger now offers a 4.62″ barrel on the Vaquero as well, and a stainless finish.) I picked the color-case blued guns chambered in .45 LC.

Previously, I’d also evaluated and bought two of the original Ruger Vaqueros (introduced in 1993), also in .45 LC, but I found I just wasn’t comfortable handling those guns with their large grip and frame size. So they went to my son, Walt II, who, being more than a tad bigger than Dad, likes them and shoots them extensively in SASS contests. (“Burt Blade” is his handle, by the way.)

Not having the original Vaqueros anymore, I couldn’t verify the claim of a recontoured hammer on the new Vaquero, but its hammer spur is quite similar in configuration to the Colt Cowboy hammer spur. The new Vaquero is also said to have a new and lighter hammer spring. Again, not having its predecessor available and using my Colt Cowboy for comparison instead, the new Vaquero is much easier to cock, but the trigger pulls, which both measured 4.5 lbs., aren’t too light for me. Because I have a good-sized hand and SAA trigger guards are small, I’ve found I can’t work with a much lighter trigger pull. I once had Richard Heinie do trigger jobs on the Cowboy Colts, both nice at 1.5 lbs. and 1.25 lbs. Nice, that is, until I shot them at the range. The guns wanted to shoot before I did! I changed the parts back to the original and heavier trigger pull.

Now, if you have a new handgun, chances are very good the gun will feature a trigger lock so it can be sold in states that have a trigger lock requirement. The Ruger New Vaquero has such a device. The good news is, without someone telling you or having read the instruction book, you won’t be able to find it. In fact, you must remove the right-side grip panel to activate the lock, which is situated at the bottom of the coil mainspring inside the grip frame. You can do two things with this lock: Ignore it or use it. You can either take the grips off, or follow the instructions on page eight of the manual that show the how and where of drilling a hole in the right grip panel. To lock the gun, you insert one of the two supplied keys in the lock and rotate the key 180 degrees, locking the hammer forward.

One other major change: The new Vaqueros load like an original SAA in one regard. Per the Ruger website, the system is “… a unique reverse indexing pawl, which positively aligns the cylinder with the loading gate cutout for easy loading and unloading of cartridges …”

The Vaquero with a blued finished and 5.5″ barrel.

In other words, with the hammer fully forward, opening the loading gate allows the cylinder to turn and the charge holes line up with the loading gate cutout in the frame’s right side. Now there’s no need, as is required in the 1993 Vaquero, to either listen for a faint click and stop the cylinder movement or carefully rotate the cylinder to get the line-up right for loading. (Owners of the previous Vaquero can avail themselves of Ron Powers’ gunsmithing kit, which allows a free spinning cylinder.) You extract cartridges in the traditional manner: by pushing on the Colt-style crescent-shaped ejector rod head.

The sights are also traditional design, with the distinctive half-round blued and smooth front sight, and a fixed square-notch groove in the top of the frame strap.

Purists have long been put off by the transfer bar system found in some modern SAA-style revolvers. They like and want the four definite clicks as they cock the hammer, claiming these sounds say “C-O-L-T.” The Ruger, of course, features a transfer bar safety. This device is positioned between the hammer and the frame such that until the hammer is cocked, the bar prohibits a blow to the hammer to cause the hammer to strike the frame-mounted firing pin. Thus, the gun is safe to carry with all six chambers loaded.

Speaking of which, while doing the shooting portion of this review at the Lower Providence Rod & Gun Club indoor range, I did have a problem related to the transfer bar, but I caused it myself. Not having read the instruction book or the warning on the Vaquero barrel, when I reassembled the cylinder into the frame, I failed to re-insert the base pin properly—fully to the rear and locked in. The solution to this “problem” is in the instruction book on page 23, number 5 under “Reassesmbly.” There it states, “The base pin must be fully inserted and locked in position by the base pin latch. If the base pin is not fully inserted and locked, the transfer bar may catch under the firing pin when the hammer is being cocked.”

More Vaqueros!
Ruger now offers a variety of Vaquero models, including the Vaquero Birdshead, the SASS Vaquero and the Bisley Vaquero.

The base pin is a snug fit, and to make sure the cylinder pin is fully seated, you must firmly hold down the base pin latch while inserting the pin. It’s possible, as I learned, to fail to do this. I let up on the base pin latch prematurely and created a fake locking of the parts. Operating the gun doesn’t disclose this mistake, for the hammer will cock and release. Simply put, make sure the pin is fully seated. My mistake strongly reconfirms the admonition to read the instruction book before using any new firearm, for what you think you know is not necessarily what you need to know!

The only other “problem” I experienced was not the gun’s fault either. Seeing the sights in normal daylight is not all that difficult, even for mature eyes, but indoors under fluorescent lights is a different story. The sights disappeared when superimposed on a black 5.5″ Shoot-N-See bullseye target. The cure: I fired one shot in the buff cardboard IDPA target and used the hole as an aiming point. Doing so, I was able to shoot five-shot groups that measured 3″ or less at 18 yards, with one exceptional effort down to 2″ using Winchester Cowboy Action 250-grain loads.

I was impressed by how easily the actions cycled and how the checkered “hard rubber” grips (in reality a synthetic of some sort), coupled with the smaller grip size (compared to the original Vaquero), aided the manipulations. After all, pretty is nice, but the gun has to shoot to be worth anything.

Later that week, Joe Venezia and I went back to the outdoor range to chronograph a variety of factory ammunition and do some fun shooting. Fellow club member Mike DiNunzio was already on the range and had his PACT Mk IV chronograph set up and offered it for our shooting as well. Also present was Mike O’Keefe.

With three “helpers,” the guns got a good workout, during which the inevitable question arose: “Can you fan it?” Well, for the legions of us raised on the cowboy shows of the 1950s and for those followers of the early Clint Eastwood spaghetti Westerns, the answer is yes, the new Vaquero is quite fannable. Of course, my efforts didn’t begin to resemble those achieved by the celluloid cowboys!

To make fanning more fun (if done safely), load up with the CorBon U.S. Cavalry Service Black Powder Ammunition. This 250-grain lead ball ammo is, quoting from the ammo box, “loaded with modern black powder to give the realistic smoke and kaboom of the traditional loads of the Old West.” They certainly do! No one had any malfunctions (probably thanks to me not taking the guns apart), and everyone certainly appeared to enjoy cowboying (safely) for a few hours.

A few years ago, when I acquired my two Colt Cowboy SAAs, I also obtained cowboy leather gear from both GALCO and DeSantis. The new Rugers are snug but good fits. I had also asked Matt Del Fatti to come up with a concealment holster for the Colt, which he did, and the new Vaquero fits this as well. I could see where beveling on the front face of the Vaquero’s cylinder allows easier holstering and avoids gouging the leather.

Maybe it’s just that I’m in the winter of life, coupled with realizing that all my wars are behind me, but I now like to shoot fun guns more. The new Vaquero fits this bill to a T. In fact, the two new Vaqueros have already become my newest keeper handguns!