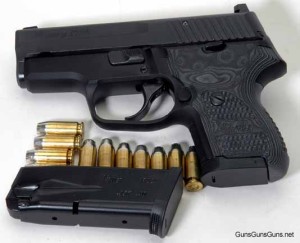 The author’s P224 Extreme, from the left.

The P224 is double-action-only (DAO) but employs the Double-Action Kellerman (DAK) trigger system (more on this later). This pistol is chambered for the .40 SW round, with .357 SIG and 9mm versions to be considered at a later date. A double-action/single-action (DA/SA) version employing SIG’s Short Reset Trigger (SRT) is under consideration, too.

The P224 slide is machined from a billet of stainless steel and, on the nitron versions, blackened to match the black anondized aluminum alloy frame. Front and rear sights ride the slide in horizontal dovetail cuts. The forward-leaning grasping cuts are at the slide’s rear. The slide has the familiar SIG stepped profile, with the top portion thinner than the lower portion. The upper, thinner area runs from muzzle to the rear of the gun’s wide-mouthed ejection port. A large, spring-powered external extractor is centered at the rear of this port.

The P224 specifications are 25.4 oz. unloaded, 6.7″ long, 4.5″ high and 1.3″ thick. The barrel measures 3.5″ long. These specs mean the gun feels a little bit wider than a standard single-column gun, but still feels good in your hand and remains easily concealable. There are few edges anywhere on the gun. 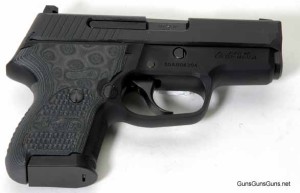 The author’s P224 Extreme, from the right.

The P224 has but two external controls: the slide catch and magazine release. The trigger is grooved. The gun holds 10 rounds in its slightly-redesigned all-metal magazine (more below) and ships with two of them.

My Extreme model came with SIGLITE night sights with tritium elements deeply inset into white inserts. In less than dim light, then, the sights appear to be a three-white-dot setup. You can also get the SIG white-dot front sight and vertical-white-bar rear sight if so ordered. You adjust for elevation by using front or rear sights of differing heights, which you can obtain from SIG. You adjust for windage adjustments by drifting the front or rear sights in their dovetail cuts.

The frame’s front strap is machine checkered. No picatinny accessory rail is present. I see this as a good decision because those looking for a handgun giving them the greatest amount of concealment most likely won’t then increase its size with an add-on light or laser accessory. 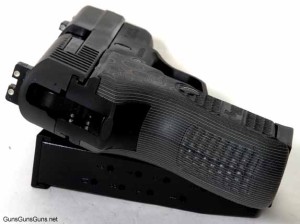 The surface treatment of the nicely-shaped Hogue grips helps you get a good grip.

The DAK trigger system is SIG’s answer to numerous comments by users of any double-action (DA) system about the difficulty of shooting accurately with such a deliberately long and heavy trigger pull, SIG pistols included. This isn’t a retrofit of the original DA system used by SIG, though, but rather a new design that drops the original DAO pull from 10 lbs. to 6.6 lbs. (This engineering feat was accomplished by SIG engineer Harald Kellerman.) I lacked a DA/SA P229 with which to compare it side by side, but I’ve handled P229s before and if memory serves, the P224 DAK trigger seems to feature a shorter trigger stroke than the P229’s for the first and subsequent shots due to a shorter reset point.

The DAK system activates when the slide is almost fully retracted and released. This action slightly pre-cocks the hammer, and the dehorned hammer is now slightly away from the rear of the slide, where you can see and/or feel it.

Is the DAK Trigger Safe?
There’s an ongoing belief that the harder it is to discharge a firearm, the fewer accidents will occur. This, then, will somehow deter or prevent civil or criminal lawsuits or charges that the user recklessly cocked his gun or failed to lower a raised hammer. You can supply your own evaluation of this belief. In any case, SIG’s DAK system in effect splits the difference, so to speak, because its trigger pull is longer and slightly heavier than it would be with SA movement, while still more manageable than historic DA triggers.

In case of a misfire, you can re-strike the misfire if you fully release the trigger, which will now function as a heavier DA trigger. The DAK trigger pull on my sample measured 6.5 lbs., and the non-DAK pull registered 10 lbs. on my Chatillon trigger-pull gauge.

To verify the re-strike ability, I used the pencil test; i.e., I placed a pencil in the barrel so that its end rested over the firing pin hole, pointed the gun upward in a safe direction and pulled the trigger. You’ll get an airborne pencil if the system works. The pencil mark on my office ceiling bears witness that it does!

I attempted to figure out how the DAK works by field stripping and removing the grip panels. With grips removed, I found that when the slide cycles, the hammer rests on a ledge of one of the internal parts. The bobbed hammer stands off from the slide in a slightly raised position similar to that of the standard DA/SA SIG action. I didn’t attempt any further disassembly because I didn’t want to send parts back to SIG…

I found one plus, though, when I removed the two-piece black-and-gray-colored Hogue Piranha grip panels. As I removed one of the grip screws, a flat rectangular piece of metal dropped from the magazine well. This part fits in a counter-sink behind what is historically, for SIG, the threaded grip screw hole in the frame. Not so now. The opening in the plate is threaded for the grip screw. Now there is no fear of stripping the threads in the frame. Repairing a stripped screw hole in the frame is a factory or qualified gunsmith’s job. Now all you need to do is buy another grip screw and its retaining plate. 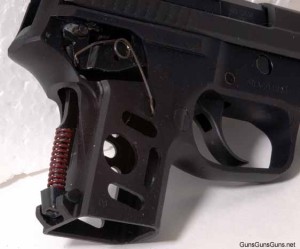 The right side view of part of the DAK trigger system.

The jointure at the bottom rear of the grip panels extends below the magazine opening, forming a stop that can help guide the magazine into the pistol. The panels’ sides and back have a series of shallow circular cuts that provide a good gripping surface. There are ambidextrous shallow thumb swells front to rear that aid in gripping and also help align your thumb to the checkered, inward-sloping head of the reversible magazine catch.

The magazine’s body is stepped inward twice as it tapers to the magazine feed lips. I understand this was done to accommodate the DAK trigger system. Currently-made P229 magazines will work in the P224. At the rear of the magazine body are eight viewing openings marked “3” to “10.” You can easily disassemble the magazine by pushing in the part of the magazine spring that’s visible in a horizontal slot on the forward part of the polymer base plate. Remove the base plate and an inner locking plate, and you can then remove the spring and sturdy polymer follower downward.

Field stripping follows the standard SIG protocol. Press the magazine catch in and remove the magazine. Pull back on the slide until you can push the slide-catch lever up into the corresponding notch on the slide. Check to ensure the chamber is empty. Turn the takedown lever to a vertical position, which is best accomplished by pushing down on the lever with your hand over the top of the locked-back slide. The takedown lever is both grooved and has a bulge on its lower edge to help in turning it. Pull the slide back slightly, disengaging it from the slide catch lever, and allow the slide, barrel, recoil spring and guide rod to run forward off the frame. 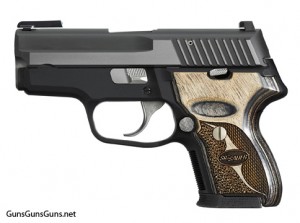 SIG offers the P224 in several models in addition to the base nitron model, including:

AJ Stuart and Ted Murphy came along for the shooting portion of this review, which we performed on the indoor range of the Lower Providence Rod and Gun Club in Oaks, Pa. We shot from 15 yards using Warren reduced-size International Defensive Pistol Association training targets, which feature a 6″ diameter center zone. Stuart, Murphy and I had no difficulty while shooting two-handed and standing, placing all our shots within the 6″ center. 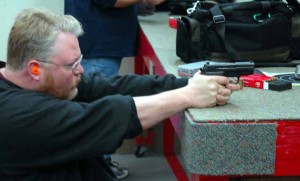 After firing only enough rounds to familiarize ourselves, we got down to business. As it turned out, Murphy did the excellent accuracy work. Stuart and I did our best, but we had an off-day, as reflected by our poor groups, with one round out of five leaking out of otherwise-acceptable 3″ groups.

We couldn’t blame the P224 Extreme or its DAK action, though. After Murphy grabbed the gun, stuffed five rounds in the magazine, he hammered out a very nice 1.5″ five-shot group on his first effort.

We also fired several ammo types through the P224 over a Master Chrony chronograph at 300 feet above sea level with ambient temperature of 62 degrees Fahrenheit. The results, measure in feet per second (fps): 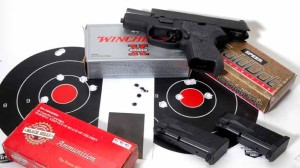 After that, with our ammo in short supply, we used the remainder of the Black Hills 180-grain JHP, Winchester 155-grain Silvertip HP and CCI Gold Dot 165-grain GDHP ammunition in defensive-style shooting. Stuart well-demonstrated his and the pistol’s good handling with repeated off-hand firing of five rounds at a time into the head box of the Warren target. (I watched a lot!)

Stuart and Murphy made the same comment, as did the two others who shot the P224 Extreme, which was how soft-shooting the pistol is with defensive .40 SW ammo. The DAK system is certainly not a hindrance to good shooting—it’s light and smooth.

Gun skills are perishable and require on-going training to maintain, and doing so costs time and money (always in short supply). With ammo in short supply as well (and expensive!), a DAO pistol, with only one trigger pull for you to master, makes a great deal of sense. And, as our testing confirmed, quick and accurate shooting is quite possible with the SIG P224 Extreme, making it a good choice. 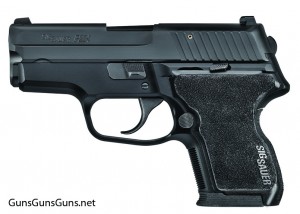 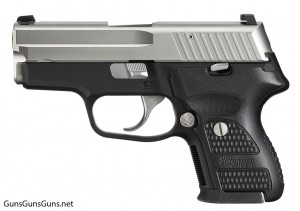 The P224 with the satin nickel slide.