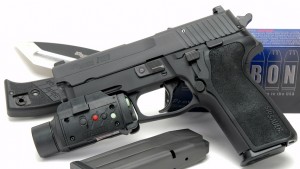 SIG Sauer’s P229 E2 is a full-size duty handgun but can also be effectively carried concealed. The pistol is short-recoil operated and has a double action/single action (DA/SA) firing system. It carries a stainless steel slide on an alloy frame.

The slide wears SIG’s Nitron black coating along with SIGLITE fixed night sights dovetailed into the slide, and these sights are part of the gun package, not optional at additional cost. You adjust the sights for elevation by drifting the sight out of its dovetail cut and then selecting one of four differing height sights available from SIG. Each sight choice will move point-of-impact approximately 1″ at 25 yards. To adjust for windage, drift the rear sight right or left as needed in its dovetail cut. (In my experience, I needed a SIG sight tool to move the very firmly installed sights.)

Extraction has been improved with a large and sturdy external extractor positioned at the right rear of the ample ejection port. Forward of this port, the slide is stepped inward at mid-line. A passive firing pin safety is within the slide, and 10 diagonal rear-placed grasping grooves enable positive slide manipulation.

The slide sits atop a machined, 7075-T6 aluminum frame which is black hard-coated over anodizing. A picatinny spec rail on the dust cover allows users to install lights and lasers. The frontstrap features fine horizontal grooving. 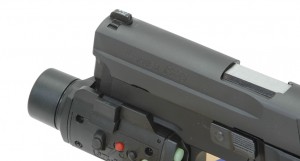 The SIGLITE (tritium) front sight is dovetailed into the slide.

To decock a raised hammer, shooters employ a decocking lever located on the frame’s left side, conveniently placed for activation by the shooting hand thumb. The decocking lever is at the top of the frame above the top forward corner of both the wraparound grip and the slide-catch lever pad.

The latter, the slide-catch lever, has long been a point of contention for those who shoot with a high, thumbs-forward grip. Doing so often results in either thumb holding the lever up or down at the wrong time, allowing the slide to lock back or not lock back inappropriately. To cure or at least mitigate this “problem,” SIG offers an optional lever part (#34226289, MSRP: $19.90) that’s shortened from its rear, diagonally cut and lengthened forward. (I was cautioned this part can’t be retrofitted to other such models because it interferes with the existing decocking lever.) The P229 E2 lever was changed to allow using this part and to ease installing the new wraparound grip. 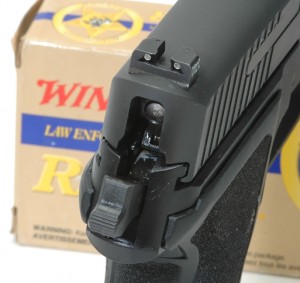 A SIGLITE (tritium) rear sight is dovetailed into the slide as well.

By the way, the lever must always be used to lower a raised hammer because this action allows the hammer to drop into and be held by the hammer safety intercept notch. There are no external safeties.

The magazine catch remains reversible and is placed at the left rear of the large trigger guard, with a finger hook on the lower portion of its front face, which is grooved for better purchase. The takedown lever is above the trigger guard.

The “E2” portion of this pistol’s name stands “Enhanced Ergonomics,” and the new grip is dimensionally smaller than the two-panel grip of the P228. The circumferential measurements of the grip (supplied by SIG) are as follows: 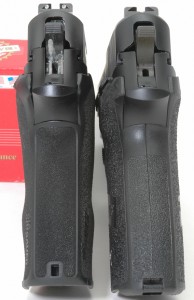 The grip measurements do not tell the whole story, however. The nicely-textured grip is contoured, and this effect worked well for me, as I think it also decreases trigger reach.

The grip’s base features a lanyard loop. The grip slips on from the rear and doesn’t use screws. Inside on either side of the grip is a raised ridge that bears against the vertical rear sides of the frame openings and holds the grip firmly.

Grip screw holes remain in the frame, however, and I was able to attach either my P228 grip panels or a Crimson Trace laser grip without difficulty. The new grip, though, will not retrofit on existing frames of the same size because, as noted above, the decock lever has been altered, as has the mainspring and its housing (as can be seen in the accompanying photo). I’m not a SIG armorer, so I didn’t poke around any further.

Discontinued? Not really.
The SIG Sauer P229 E2 has been discontinued, but it’s not really gone. According to SIG VP Bud Fini, SIG simply eliminated the E2 designation because the company now includes the new grip on all P229 models.

To remove the grip, SIG provides a grip removal tool. To use, insert it into the magazine well from below. After aligning the long crosspiece with the inside of the grip through the frame hole openings, gently turn the tool so the grip spreads apart equally. Then pull the grip off to the rear. The grip slips back on, but take care not to allow it to dislodge any springs. I’m told the tool will ship with every gun. If your gun doesn’t have one, call SIG or gamble you won’t break the grips while prying them apart. 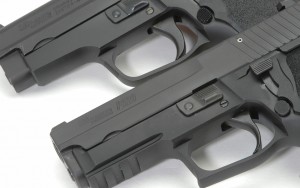 The trigger shaft of the P229 E2 (bottom) is visibly more narrow.

Although SIG’s DA/SA trigger system has been retained, the SIG Sauer Short Trigger is present, too. The Short Trigger is created by thinning the trigger shaft from its front, which moves the trigger face rearward approximately .4″ compared to the standard trigger. In addition, the P229 E2 features the SRT or Short Reset Trigger, which, according to SIG, features a 60% shorter trigger reset distance (the distance the single-action trigger must be released until hammer and sear re-set).

SIG also says a different sear and safety lever is used here, as in all SIG Sauer Elite Series pistols. Translated, the trigger is closer to the rear in either double- or single-action mode and, when released to reset for another shot, the forward movement needed to re-engage the hammer and sear is roughly 60% less than that needed with the standard trigger system. The net result: Both a real and perceived shorter trigger pull.

An increased-capacity, all-steel magazine feeds this pistol. It gains two rounds for a total of 15 in 9mm compared to the P228 and P229 at 13 rounds. The new magazine will not fit the other pistols because the P229 E2 magazine is thicker, as shown by the following measurements taken at the magazine catch opening and the top of the base pad: The P229 E2 measures .914″ and .974″, respectively, while the P228 magazine comes in at .907″ and .911″.

Cartridge witness holes on the rear face are numbered 3–15. The polymer base plate, which also serves as a slight finger rest, is removable for cleaning. (Note: Existing 13-round magazines will fit and function in the P229 E2.)

I admit at first I was a bit put off with the results I got with this gun. A week earlier I’d shot a SIG Sauer Mastershop P226 X-5, also chambered in 9mm. The X-5 is competition focused. It features a 5″ barrel, a 3-lb. single-action trigger, adjustable sights and large, well-fitted wood grips. Bullets almost literally piled one on top of another. 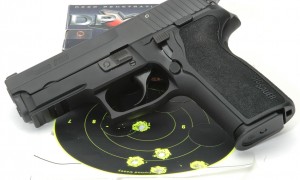 Ultimately, however, the range results were as anticipated. To gauge accuracy and velocity, I shot the pistol over a Gamma Master Chrony chronograph indoors at 80 degrees F and 300 feet above sea level. Here are my five-shot averages and groups at 20 yards:

I’m OK with this.

SIG’s advertising claim of “A New Look and Feel” for the P229 E2 is well borne out. It’s been said a handshake makes the most powerful first impression, and this applies here, for when I first handled the P229 E2, I knew the new grip was definitely a change for the better—on an already excellent pistol.

Note: This pistol is not California or Massachusetts approved.

Links to Pages for SIG’s Other P229 Models