Early this year, SIG Sauer announced the P938, and updated/bigger version of it’s P238 pistol, which was introduced in 2009. I obtained a 9mm sample of the P938 Nightmare model and put it through its paces. My review follows below. 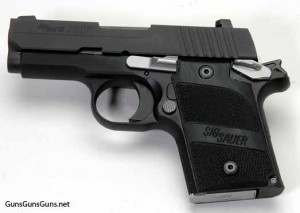 The author’s sample P938 Nightmare, from the left.

As noted above, the SIG P938 chambered in 9mm (and .22 LR) is an updated version of SIG’s P238 chambered in .380 ACP. With the P238 being a locked-breech, short-recoil-operated pistol, the action is more than sufficient to handle the more powerful 9mm round. In one sense, the original—the P238—is overbuilt for .380 ACP (many other pocket pistols in this caliber successfully work with a more simple and less-costly-to-produce direct blowback system).

Mechanically, the only change applied to the P238 to turn it into the P938 involved slightly enlarging to accommodate the longer-in-length 9mm cartridge. If you want to get picky about it, you can also include the new standard ambidextrous manual thumb safety of the P938, which is an extra-cost option on the P238. The single-action-only P938 resembles a miniaturized version of a 1911 pistol, yet mechanically varies from this ancient (but still quite effective) ancestor. One quickly-visible change: There is no manual grip safety.

The P938 is available in several configurations, include:

Barrel lock-up is straight SIG, with the chamber hood mating with the ejection port. There is no barrel bushing, but there is a full-length, non-captive recoil spring on a metal guide rod.

It has an exposed and rounded hammer, ambidextrous manual thumb safeties and an overall length of 5.9″. It measures 3.9″ high and 1.1″ wide, and SIG says the trigger pull weight is 7.5–8.5 lbs. The barrel length measures 3″, and the gun weighs 16 oz. (without a magazine). 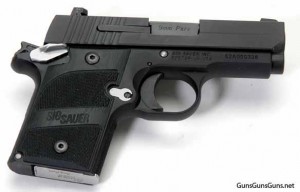 The author’s sample P938 Nightmare from the right.

The grip panels are checkered except for the horizontal strip centered on both in which “SIG SAUER” is cut into the smooth surface. Four blued Allen screws—two to a side—hold them in place. The grips extend upward, partially shielding the slide stop, magazine catch and thumb safeties. These safety flanges or shelves then protrude just enough for manipulation, while still providing some protection against accidental movement.

I encountered one problem with this protection: When shooting with a high grip, part of the flesh of my shooting hand was pinched when I disengaged the ambidextrous safety. If I were to own this sample, I would experiment at softening and/or lowering the sharp edges of the panel beneath the safety so that the safety movement would push away, not trap, the flesh of my hand. For me, though, this is but a small price to pay for the advantages of easily operating the safety with either hand and lessening accidental disengagement, which I often manage to do when carrying or using other 1911 pistols lacking this thoughtful consideration. (My usual solution is to either remove the off-side safety or file the flange down to such an extent that it takes effort to operate it at all.) 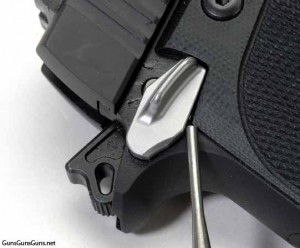 The author’s hand was pinched here.

The P938 Nightmare’s slide comes equipped with SIGLITE night sights, which are held in dovetails on the slide. While not specifically addressed in the accompanying instruction manual, the SIGLITE sights, as well as the standard sights, are adjustable for elevation. Six rear and five front sights allow approximately a 2″ point-of-impact change at 25 yards. You adjust windage by moving either or both sights in their retaining dovetail cuts.

The ejection port is quite large. There are seven grasping grooves to its rear. The spring-powered extractor, retained by a hollow pin, is on the ejection port’s right side. The sides of the slide have the SIG look, which is a centered relief cut with the top portion narrower than the lower portion. This treatment runs from muzzle to the rear of the ejection port. 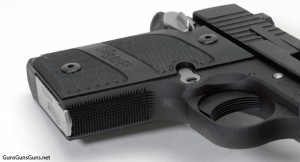 The trigger is grooved and the front strap checked.

Examining the bottom of the slide shows a feature first used on the cartridge pick- up rail of the P238. This is a dome-shaped projection on the bottom forward portion of the rail, and its function, according to a SIG engineer, is to help ensure the last round’s empty case fully clears the gun. As was explained to me, when the last shot is fired and an empty magazine is in the gun, the dome then presses against the magazine follower as the now-empty case extracts and ejects. Also, the forward lower edge of the pick-up rail is beveled to aid the cartridge’s movement into the barrel chamber.

The alloy frame has a decent-sized beavertail, relieved at its top, allowing the exposed grooved and skeletonized hammer to move down into it when the gun cycles. The magazine well is slightly beveled. The front strap and the mainspring housing are finely checkered. The horizontally-grooved slide catch, magazine release and ambidextrous thumb safety are all on the left side and frame-mounted in 1911 locations. The slide catch is above the trigger guard, the magazine catch is at the guard’s lower left rear and the manual safety is at the top-rear of the slide (on both left and right sides, of course). Safety note:You can manipulate the slide for loading, unloading or chamber inspection with the safety in the up or on position. 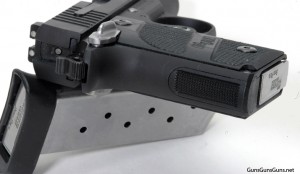 The mainspring housing is checked, too.

SIG has also addressed a problem I found with my Colt Government .380, on which the thumb safety is too easily dislodged. On the P938, the thumb safeties move positively but with authority in and out of on-safe or off-safe mode.

The pivoting polymer trigger is vertically grooved on its face. My measurements showed trigger weights of 7 or 7.5 lbs., depending on where I placed the trigger gauge arm on the curved trigger face. Also as mentioned earlier, there is no grip safety or barrel bushing, but a passive firing pin safety system is in the slide and is similar to that used in other semiautos.

The single flush-fit, all-metal magazine holds six rounds and features six inspection holes on each side. An optional seven-round magazine is in the pipeline (it will come standard with P938 Extreme). I was sent one of these optional seven-round mags for inclusion in this article. The protruding magazine has a polymer spacer that fills in the space created by its additional length, with the collar fitting nicely and adding to the grip length. I found the collar improved the gun’s feel because I could now get a full three-finger grip. It actually adds only .5″–.625″ to the length of the frame, but I’d go with this setup over the flush-fit magazine for everyday carry unless maximum concealment is absolutely necessary.

When the recoil assembly is correctly installed (unlike here), the notched area won’t visible.

To disassemble the P938 (after ensuring the gun is unloaded and magazine removed), move the slide rearward until the slide disassembly notch is aligned with the slide-stop tab. With slide stop removed, the slide comes off to the front of the frame, but take care not to lose control of the non-captive recoil spring on its full-length, stainless steel guide rod. Remove this assembly with forward pressure and a lift. You can then drop the barrel down and out of the slide.

For those familiar with the Colt Government .380, there was a problem of sear spring over-ride of its ejector, which was corrected by Colt with a user-installed metal clip. SIG addressed this by having the lower edge of the sear spring captured in a notch cut in the lower forward face of the mainspring housing. 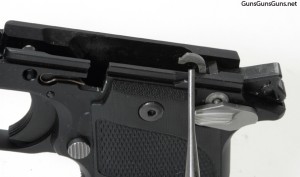 Don’t depress the ejector too far when disassembling!

When you re-assemble the P938, there are a few musts. You must make sure the narrower end of the recoil spring faces the rear on the guide rod. Also, the notched side of the guide rod must face toward the barrel. (If done correctly, you can’t see the notched area when the assembly is installed.) If you don’t do either of these steps, the gun will malfunction.

Also—and this is another biggy—you must depress the ejector only enough to allow the slide full rearward travel on the frame. Push the ejector down too far and your next step is shipping the gun back to SIG. Per the instruction manual, “This condition is not correctable at the operator level—the pistol must be returned to SIG Sauer for repair.” For those who might have done this with the Colt .380 and managed to correct it, I don’t see this happening here because the internal parts are not the same. 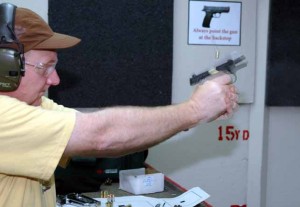 At the range, three of us shot this sample gun with a limited amount of ammunition, which included Federal Hydra-Shok 147-grain JHP, Hornady 124-grain JHP/XTP and Winchester 115-grain FMJ. We shot at 15 yards, seated, over a gun bag rest, with a Master Gamma Chrony chronograph, 300 feet above sea level in an ambient temperature of 73 degrees F. The groups listed below represent a five-shot average: 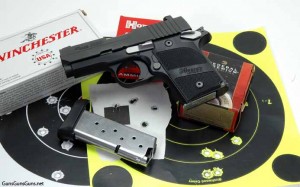 The author’s target results from 15 yards, seated, using a table for a rest.

All the ammunition worked without any failures. (Note: SIG recommends changing the recoil spring every 1,500 rounds for best functioning.) The only limitations I found were the same as what I had with the P238. Down-range accuracy depends on distance to target, but more important for me was how well or not I managed the trigger. Most important, however, was how well or not I maintained the same stiff arm hold while firing. The short sight radius didn’t help either.

I did try the longer magazine and found the results to be the same, but I felt I was expending less effort to get there. That said, the P938 is not a bulls-eye pistol unless the “target” is a well-placed defensive shot or two, three or more fired in self defense. For this purpose, the P938 will dot an I, so to speak.

With SIG’s introduction of the P938 semiauto pistol chambered in 9mm, we now have a quite viable miniaturized version of the 1911 handgun for personal defense. SIG has not re-invented anything, but certainly has improved on an existing design and has provided those devotees of the 1911 with a choice of caliber and operation well suited for personal defense in a highly-concealable package. 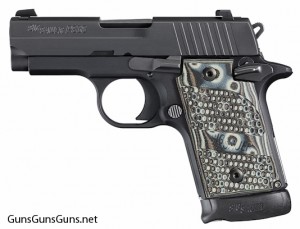 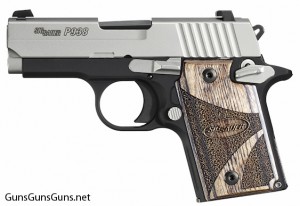 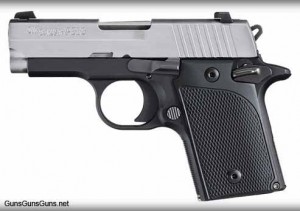 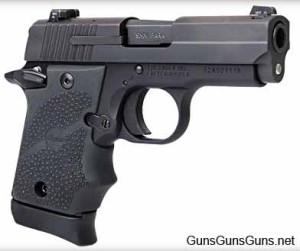 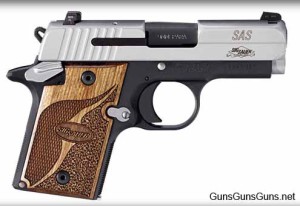 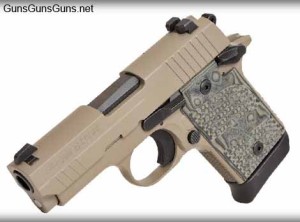 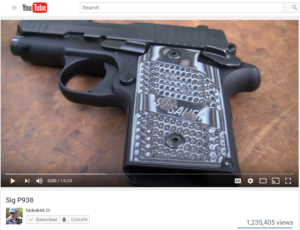 Check out Hickok45’s YouTube review of the P938 by clicking on this screenshot.