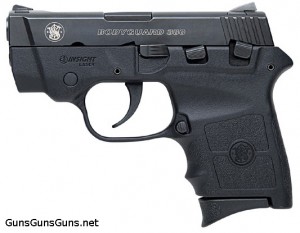 The Bodyguard 380 from the left.

When I worked as a uniformed police officer and as a U.S. Customs Agent, I carried a five shot Smith & Wesson (S&W) J-frame revolver on most occasions as a backup and undercover gun. My #2 choice for a backup gun was a Walther PP or PPK chambered in .380 ACP. I did so because in the old days we didn’t have subcompact pistols in more substantial calibers. It took a few years before pistols such as the 9mm S&W 6906 and the S&W 3913 became available and were compact enough to ride in an ankle holster, and even then these pistols were larger than a pocket pistol such as a Walther. For the longest time when you needed to carry the most concealable handgun possible, your choices were limited to a five-shot revolver or a Walther PPK style pistol.

After I retired, I eventually began to carry more compact and full-size handguns for personal protection and home defense instead of pocket pistols, which is the opposite of what most retired law enforcement officers do. However,  I recently changed my position on carrying a pocket rocket after I had the opportunity to field test and evaluate a S&W Bodyguard 380 pistol.

Historicaly, S&W has used the term “Bodyguard” to describe a particular five shot J-frame revolver with a humpback frame that covers the hammer. The shooter could still cock the hammer on their Bodyguard revolver because the humpback frame was split down the middle in the back, but the humpback kept the hammer from snagging on clothes. Thus, the name Bodyguard signified a handgun capable of being brought quickly to bear in a deadly force situation because it’s snag-free and easy to carry concealed.

S&W has now begun using the term Bodyguard to identify both a revolver (the Bodyguard 38) and the semiauto pistol I‘m reviewing here: S&W Bodyguard 380. This pistol is built on a polymer frame with a stainless slide and barrel, and it sports a black melonite finish. The pistol is double-action only (DAO, hammer fired) with a second-strike capability, and it carries a stainless steel front sight, a drift-adjustable rear sight and a laser. 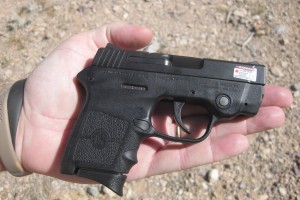 The Bodyguard 380 in the author’s hand.

The Bodyguard 380 is small enough to literally fit in the palm of my hand, yet remains reliable, accurate and comfortable to shoot for a true pocket-size pistol. This is the case because Bodyguard 380 has excellent ergonomics even for someone (like me) who has a large hand.

The DAO trigger does take some getting used to, but it’s better than the heavy DA/SA trigger on a Walther PP or PPK pistol. After maybe 18 rounds of practice ammunition, I grew comfortable enough with the trigger to shoot the Bodyguard 380 accurately.

I was impressed with the overall fit and finish of this pistol, and I actually like the fact it’s equipped with a slide-mounted safety lever. After carry it a while in my pocket in a DeSantis holster, I have checked the pistol, and never once has this safety accidentally disengaged.

While testing this pistol for this review, I carried the Bodyguard 380 as a backup gun when I carried a SIG 220 Compact, a 9mm SIG 228 and a Glock 19. I also carried the Bodyguard 380 as my only pistol on several occasions when I had a larger handgun in a more substantial caliber close by. The bottom line: The Bodyguard 380 was incredibly comfortable to carry all day and all night in an old DeSantis inside-the-pants holster with a metal belt clip, as well as in a DeSantis universal ankle rig and in a DeSantis Style 86 high ride belt holster.

I even carried this pistol in my right-hand pants pocket while using a DeSantis holster and never once felt uncomfortable. I also found it easy to carry at least one spare magazine, and on some occasions two spare six round magazines on my person at all times while armed with the Bodyguard 380.

I was able to place the contents of two six-round magazines into the head of a TQ19 Police Firearms Qualification (man size) target at a distance of about 15 feet. I chose 15 feet because in my opinion this is an ideal close-quarter battle (CQB) distance for a pistol the size of the Bodyguard 380. This doesn’t mean you can’t engage targets closer or further away with the Bodyguard 380; it merely means I used 15 feet for this test because it seemed like a suitable “let’s get it on” distance for a backup gun or primary pocket pistol.

To really see if I was getting comfortable using the Bodyguard 380, I kicked things up a notch and intentionally cycled the DAO trigger as fast as I could pull it. I was able to deliver shot after shot inside the diameter of a pie plate at 15 feet. Quite frankly, I was surprised I was able to deliver such precise shot placement while firing such a super subcompact size pistol with a revolver-style double action trigger pull from a standing, unsupported, two-handed position. 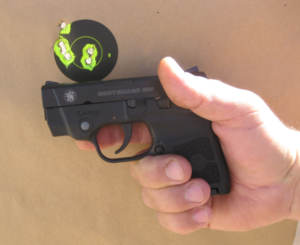 The Bodyguard 380 proved accurate at 15 feet.

I do have one complaint that may or may not mean much to the average shooter. At the risk of alienating an entire segment of firearms enthusiasts, I admit I personally have no use for an integrated red-dot laser on firearms, especially on a snubby little pistol. In my hands, the laser activation button is in an awkward position. I tried using the integrated laser a few times, but I never once used it under firing conditions. Quite frankly, I wish S&W would make another version of the Bodyguard 380 without a laser to bring the price down even more. That would make my day.

A Bodyguard 380 with one or two easy to conceal six-round magazines is an insurance policy that will always go bang when you need to engage a hostile adversary with deadly force. I see this pistol as an ideal backup gun and undercover pistol, and as a primary carry pistol if you can’t carry a more substantial handgun in a more substantial caliber for any legitimate reason. The Bodyguard 380 is also the ideal pistol to carry concealed in your residence if a rash of armed robberies or home invasions where you live concerns you enough to motivate you to be armed at all times. The bottom line: This gun should be powerful enough to make a mugger, carjacker, rapist or burglar take their business elsewhere.

In my hands, this pistol proved comfortable to shoot, accurate, flawlessly reliable and easy to carry concealed and operate. If it continues to perform as is, I may state for the record that the Bodyguard 380 is the finest super subcompact pistol on the market bar none. I showed it to my oldest son (a city police officer), and he liked it, too.

My only reason for debating whether or not I should buy this pistol is that I’m not crazy about adopting another caliber to my battery of personal defense weapons, especially with the price of ammunition skyrocketing through the roof. I can get the same if not better protection from my five shot .38 Special revolver, although the arthritis in my hands makes it difficult to shoot a .38 Special revolver with anything more powerful than 148-grain wadcutters unless I use rubber grips, which in turn make a wheel gun larger. This is a tough call, one that I may have to take some time to consider before I send the Bodyguard 380 back to S&W.

Note: S&W now offers a non-lasered version of this gun, the M&P Bodyguard 380.