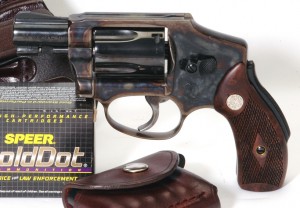 Several years ago, Smith & Wesson (S&W) re-introduced its Model 40 snub-nose revolver, which first appeared back in 1952. S&W dubbed the new version the Model 40-1, and I picked one up to check out the improvements and compare it to my older Model 40. 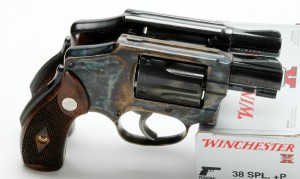 Like the original, the Model 40-1 features a manual grip safety. To fire the Model 40-1, only a firm grip will disengage the grip safety. This forces the shooter to properly grip the gun, which is in turn one of the basic steps in firing a well-placed shot. The grip safety also provides some impediment to accidentally pulling the trigger.

Another advantage, for me, is the shape of the grip safety, which sticks out of the backstrap even when depressed and is vertically grooved, the combination of which gives me a better, more secure shooting grip. (I wonder why S&W doesn’t groove all the backstraps of its small-frame revolvers, or why this is not requested from gunsmiths more often?)

On the first modern Model 40s, you could neutralize this grip safety thanks to a supplied pin found under the grip panels. (You inserted the pin into matching holes in a depressed grip safety on the frame.) Unfortunately, this feature is not provided with the new Model 40-1 since, thanks in no small part to U.S. civil liability laws (S&W would be sued for providing a means to defeat this device).

S&W Trivia
Legend has it Horace Wesson devised the grip safety on the original .38 Safety Hammerless model so that a small child couldn’t fire the revolver due to their hand size being too small to both depress the grip safety and pull the trigger. He supposedly tested the design by having his young nephew attempt to and then fail to fire the so-constructed gun.

The Model 40-1 is hammerless, which means there’s no hammer spur to catch on clothing when carried, say, in a pocket. What’s not so readily apparent, though, is that lacking an exposed hammer, you can grip the gun slightly higher for more recoil control because the hammer can’t hit the web of your hand. As a matter of fact, the original 1952-issued Model 40 Centennial features higher grip panels than do the exposed-hammer guns. This nice touch isn’t present on the new Model 40-1. The grip panels, though, are nicely checkered and feature a large diamond center surrounding the grip screw holes. These grips are much nicer than those that came with my own Model 40s and 42s, which are smooth-faced and rather coarse-grained.

Moving up top, the Model 40-1 sports two improvements. First, the sights are wider and much easier to see, particularly as I’ve gotten older. The front sight is ramped and grooved, and the rear is a square notch in the top strap. The trigger is smooth faced and slightly rounded, and the cylinder release checkered and dished out for easy operation.

Second improvement:The barrel is stamped (on its left side) “.38 S&W SPL. +P,” which might provide some comfort to those concerned that shooting lots of such loads will ruin their gun. Personally, I think you should shoot what you want and if and when you manage to wear the gun out, get another one! I regularly carry and shoot CCI Gold Dot 135-grain +P (which is expressly made for snub-nose revolvers), Cor-Bon 110-grain +P or Hornady 125-grain JHP loads in my circa-1973 Models 40 and 42. Neither has worn out yet despite my best efforts, but I have two more new-in-the-box that I bought back then just in case…

Speaking of shooting, the Model 40 genre has always had an action that differs from the double-action (DA) movement of the exposed-hammer J-frames. I find the trigger action to be longer in its rearward movement, and as it moves, the cylinder indexes well before the hammer completes its rearward movement and releases. I don’t have an explanation for this and I’ve asked some of the S&W folks, who say the actions are the same. Be this as it may, I can shoot the Model 40 better than I do the exposed-hammer guns. 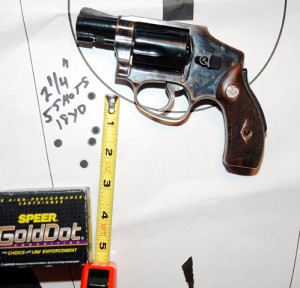 This longer action also lends itself well to a two-stage DA trigger pull. To do this, I grip the gun such that my trigger finger hits the frame just as the cylinder is indexed and before the hammer is released. I then slide my trigger finger rearward while catching part of my finger between the trigger and the frame, in effect squeezing my finger out of the way with rearward pressure. This effectively gives me a sort of long, single-action trigger press, with much better accuracy. This is how I shot the accompanying target photo. Arguably, this is more trick than practical, but having mastered this, I’ve increased my ability to get good hits at otherwise-prohibitive distances.

Conversely, for defensive shooting the best method, for me, is pulling the trigger with steadily increasing pressure until the shot breaks and then riding the trigger forward at the same speed until the action resets. This metronome motion gives me the path to fast, accurate shooting because this practiced motion carries over when pressing the trigger quite quickly, with less overall gun movement.

I took the Model 40-1 to the range and reached this conclusion: My sample Model 40-1, like all J-frame S&Ws, features the inherent accuracy that well exceeds what most folks can deliver. Shooting from a rest and with good trigger control and sight alignment, along with good ammo, a J-frame’s accuracy equals any S&W revolver.

If you’ve followed the articles written about the Model 40-1, you might conclude this gun has been a long-time winner because its ancestor, the S&W .38 Safety Model hammerless revolver, was introduced in 1887. I think not, however. At least not in the sense of being a best seller, for its predecessors (and the Model 40 itself) have been repeatedly discontinued and then re-introduced over the years. Indeed, the Model 40-1 has already been re-retired.

The reality: The Model 40 genre was and remains a specialty handgun that has never outsold the more-traditional S&W J-frame versions, which embody both single-action (SA) as well as DA-only (DAO) triggers. This is not to say the Model 40 genre is not optimum for its purpose, which is up-close personal self defense against two-legged predators. The problem is that a DAO small-frame revolver is simply more difficult to learn to shoot well than an SA/DA J-frame, and retaining this ability requires at the least episodic practice.

So, when you buy and decide to carry the Model 40, you have taken a non-ambivalent stance. The Model 40 in its various incarnations allows no room for rationalization of user ability nor denial of the gun’s singular purpose: self defense against a predator. You must decide to either practice and gain the skill necessary to shoot it well, or resign yourself to only muzzle-contact use.

If we accept the above, why do many of us continue to buy and carry the Model 40 or its various permutations? Simple: Because it’s the best tool for the job when social and legal constraints preclude using a larger arm.