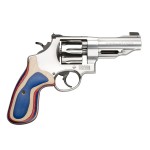 Is bigger always better? Long before McDonalds introduced the term “supersize” to our vocabulary, American consumers favored that larger slice of life. A big house, big truck or even a big candy bar was always the better choice.

This attitude often carried over to the defensive handgun. Many shooters are familiar with the story in which the greenhorn asks the Texas Ranger why he carried a .45. “Because they don’t make a .46,” the Ranger replied.

Prior to the development of reliable, expanding handgun ammunition, a big bore held a significant advantage over the lesser calibers. Even today, many professionals feel the tried and true .45 ACP is still the way to go. 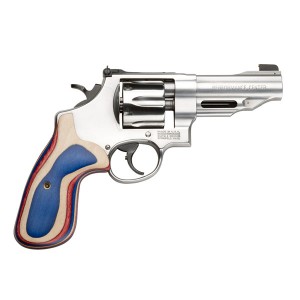 The short tour of the .45 ACP’s rise to the top goes something like this: Shortly after the Spanish-American War, the U.S. military forces were involved in putting down a rebellion by Moro insurgents in the Philippines. The standard issue revolver chambered in .38 LC was a very poor stopper—despite taking multiple hits, enemy combatants continued to fight. Based on this experience, the experts of the day felt a big bore handgun would be a better choice, and a few years later, the 1911 pistol in .45 ACP arrived on the scene.

As the United States began ramping up for World War I, very few 1911s had actually entered service and lack of production facilities allowed no chance to catch up. To meet this shortfall, the U.S. military prevailed upon Colt and Smith & Wesson (S&W) to adapt the .45 ACP cartridge to their large frame revolvers. Both firms complied, with Colt turning out their New Service and Smith & Wesson their Model 1917.

Since that time, the .45 ACP has become firmly entrenched in American shooting culture. It remained the standard of the U.S. armed forces for 75 years and remains in use by special units today. Self-loading .45 ACP pistols are more popular now with law enforcement officers and responsible citizens than any time in the past. But what of the .45 ACP revolvers?

After World War I, tens of thousands of .45 ACP revolvers were channeled into the surplus market. Commercial versions with fixed and adjustable sights were available for years but never really set the world on fire. In more recent times, shooters discovered the .45 ACP revolver was perfect for action shooting sports, and suddenly there was a demand. S&W answered the call and introduced the Model 625.

A number of 625 variants have been introduced, and I recently had an opportunity to check out what I believe is the best of the breed. The new 625 Performance Center (PC) is a premium quality, big bore blaster that benefits from a number of enhancements from the S&W Performance Center. Although it’s designed to appeal to competitive shooters, the 625 PC is, in fact, a double duty gun that would be a very formidable self defense piece as well. 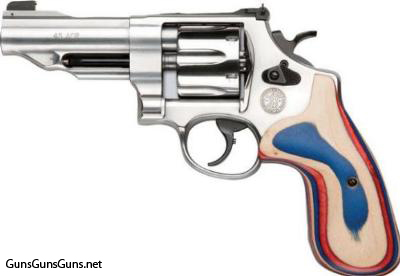 Like other 625 revolvers, the 625 PC features adjustable sights. The micrometer rear is matched to a patridge-style front with a gold bead insert. You can easily swap out the front sight for a different style if it doesn’t meet your needs.

A number of Performance Center frills are evident. The hammer spur sports a unique teardrop shape and the cylinder is chamfered to facilitate the smoothest possible reload. Many observers will note that the barrel profile between the 625 PC and the S&W Professional Series is very similar. The extractor rod shroud below the barrel is cut out, another deviation from the standard 625. The cylinder is slightly shorter than standard-production .45 ACP revolvers, and the forcing cone extends further into the frame.

It’s sort of tough to ignore the Altamount laminate grips, which are red, blue and natural in color. These grips do, in fact, make a fashion statement, but may not appeal to some users. In any event, salvation is only a screwdriver away and aftermarket grips are widely available in a variety of styles.

The 625 PC also incorporates some not so obvious enhancements. The 4″ barrel features deep broached rifling for better accuracy potential. Double action pull was very nice, considerably superior to S&W’s standard production guns. Hand fitting by the S&W Performance Center craftsmen is evident as you take a sight picture and dry fire (you did check it twice, right?) six quick shots.

Other qualities remain consistent with current S&W production. The firing pin is contained internally in the frame as opposed to the hammer nose of days past. Both the extractor rod and star have been redesigned for the better, and a new angled cylinder latch is employed. And, like it or not, the 625 PC is equipped with an internal lock that, when activated, prevents the gun from firing. Truth be told, I wish it wasn’t there, but it’s not a deal breaker. If you don’t like it, don’t use it.

Shots Fired
I tried my hand with the 625 PC on a brisk March morning, and on the whole, I was very pleased with the results achieved. The gun ships in a hard plastic case with a Performance Center logo that protects it during storage and transit. With the test revolver secured in the case, I rounded up a quantity of both .45 ACP and .45 Auto Rim ammunition and set out to the range.

Shooting those requisite five shot groups off a rest often proves challenging, but the M625 PC was a capable performer. Using a Hornady Delta Rest for support, I sniped away at targets set 25 yards and enjoyed some fair results. Quite frankly, any time I can print bragging size groups at that distance, I’m a happy guy, and the M625 PC allowed me to do just that. I turned in sub-2″ groups with .45 ACP Black Hills 185-grain JHP, and .45 Auto Rim Black Hills 255 grain SWC and CorBon 160 grain DPX. My less than perfect technique opened up the average size of groups fired a bit, but performance still proved satisfactory. Here are all my results:

Despite my success, I feel the 625 PC is capable of even better accuracy. As is often the case, I would print a real tight group of three or four shots and then spoil it with a flyer.

Fast double action shooting proved uneventful. The slick DA trigger kept me at the top of my game, and the gold bead front sight proved very quick to pick up.

Throughout the evaluation, I used a couple different holsters, including a Safariland 568 Custom Fit paddle holster. Shooting partner Gene Zaiss pressed a Kydex holster by Sidearmor into service.

ACP vs. Auto Rim
Revolvers chambered for a rimmed case such as the .38 Special can be loaded with a speedloader or by inserting individual rounds in the charge holes of the cylinder. With the rimless .45 ACP case, the drill is a little bit different. Ammunition is held captive in moon clips, essentially a flattened piece of steel holding the rimless cartridges by the base. To load, insert cartridges together with the moon clip into the cylinder. During the unloading process, stroke the extractor rod to empty cases along with the moon clip.

Moon clips were designed just prior to America’s entry into World War I as an expedient measure of adapting the rimless .45 ACP cartridge to a revolver. Originally, half moon clips holding 3 cartridges were utilized. In the 1980s, full moon clips holding a full complement of six cartridges hit the scene, and things haven’t been the same since. Full moon clips are faster than speed loaders, and competitors are eager to embrace any advantage. If you feel the need for speed, full moon clips offer the fastest possible reload.

In the 1920s, many Colt New Service and S&W Model 1917 revolvers were sold as surplus. At that time, the Peters Cartridge Company introduced the .45 Auto Rim, essentially a .45 ACP case with a double thickness rim. The Auto Rim could be fired and extracted from .45 ACP revolvers without the need for pesky moon clips that are easily bent or lost. With .45 Auto Rim ammunition, loading and unloading was the same as with any other revolver.

I’ll confess that I didn’t give .45 Auto Rim much thought until just a few years ago. A buddy had given me a quantity of .45 Auto Rim brass, and on a lark, I bought a shell holder and began reloading it.

Much to my surprise, the .45 Auto Rim has a lot going for it. Not from the gamesman perspective, but as a viable self defense cartridge. Before you think I’ve been drinking Hoppes #9, consider the following.

Full moon clips loaded with .45 ACP are an “all or nothing” proposition. With .45 Auto Rim in the gun, however, I can load one, two or six rounds depending on the situation. With a revolver, the ability to perform a tactical (i.e., partial) reload is critical. Auto Rim allows me to replace rounds in the gun as needed without dumping my live ammunition. Neoprene strips to hold spare ammunition for a tac load are available from Bianchi and Tuff Products, and .45 Auto Rim speedloaders are available from HKS. A full moon clip of .45 ACP will give you a super fast reload and the best of both worlds.

Big bore revolvers in .44 Special and .45 Colt have long enjoyed a small but loyal following. When it’s all said and done, a revolver in .45 Auto Rim may be an even better choice for self defense.

The Verdict
Plus-size S&W revolvers that launch big heavy bullets at moderate velocities continue to attract attention. Although they deliver a healthy rearward push, I find them far more pleasant to shoot than magnum revolvers, which torque the wrist and generate enough muzzle blast to make your head pointy. The 625 PC was definitely a fun piece to work with.

As indicated earlier, most buyers drawn to the 625 PC will be competitive shooters who participate in action shooting. In that discipline, the premium quality 625 PC is an excellent choice.

Users who favor the revolver for the trail or self defense will likewise be very well served. Personally, I wouldn’t want to carry a heavier revolver, but the 625 PC is within my all-day comfort zone. Despite the fact the autopistol rules, some folks still favor a big bore revolver for self defense.

Other than the grips, I found the M625 PC to incorporate all the qualities I prefer in large revolvers.