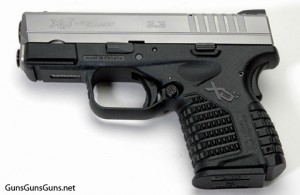 If you are at all interested in acquiring a .45 ACP subcompact semiauto pistol, the new XD-S (the S stands for “small”) from Springfield Armory should be on your radar. The XD-S is the most recent version (and the smallest yet) of the XD pistols, which are imported from Croatia by Springfield, with final assembly done in the United States. (Update: Springfield now offers the XD-S in 9mm and .40 SW, too. —ed.)

Some quick XD history: In 1991, IM Metal in Croatia began manufacturing a 9mm pistol (and a subsequent version in 1995) for the Croatian military and police. In 1998, based on this successful design, IM Metal then created the polymer and steel HS2000, which also received favorable reviews but, for whatever reason, wasn’t distributed widely in the United States and the guns didn’t have a chance to catch on with U.S. gun owners. Springfield then took over the U.S. marketing and backed the gun with its excellent reputation and a lifetime guarantee for the pistol, which was renamed the XD (which stands for “Extreme Duty”) and often referred to as the XD Extreme. The rest is history.

I obtained an XD-S from Springfield for evaluation and testing purposes, and I offer my notes and thoughts on this pistol below. 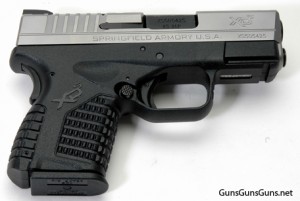 The XD-S from the right.

In appearance, the XD pistol borrows a bit from other handgun designs. For example, in overall design, the shape of the frame follows that of the Walther 99, the original double-action/single-action SIG Sauer and Glock handguns. The XD-S shares many XD features, such as a striker-fired action, a trigger-mounted drop safety and a firing pin safety, which Springfield labels the USA (i.e., Ultra Safe Assurance) trigger system.

One important modification: The XD-S employs a single-column magazine, not the double-column mag found in other XD pistols. This steel magazine includes a removable polymer base plate, and two come with the gun. An optional seven-round extended magazine is also available (more on this later).

Other shared features include a left-side mounted slide catch and take-down lever, a manual grip safety and an ambidextrous magazine release. Also, a safety lever is centered in the wide, grooved, metal trigger. The trigger moves roughly .5″ in take-up before encountering a measured resistance of 7–7.25 lbs. When you apply pressure to the trigger, the trigger bar moves the sear down and away from the firing pin that had been previously captured by the sear when the slide was retracted. 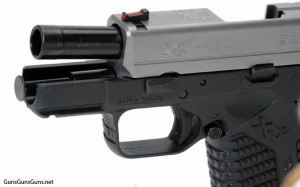 An enlarged annular ring at the front of the barrel provides lock-up.

While the XD is technically single-action, Springfield and its Croatian partner use an innovative spring selection that controls trigger movement and trigger pull weight to the extent the trigger feels as though it’s a very smooth but short double-action. My sample’s trigger reset is relatively short, audible and easily felt.

The large ejection port has a spring-powered external extractor in its lower right rear, while the spring-powered, loaded-chamber-indicator arm has been placed at the top-center rear of the port. A chambered round raises the front of this arm so you can see and feel it.

Retracting and releasing the slide retracts (i.e., cocks) the striker firing pin against its surrounding striker spring. This action also causes the rear of the striker to protrude from the slide’s steel backplate, where it then serves as a tactile and visual indicator of the gun’s status. There is no second-strike capability—you must retract the slide to re-set the striker. 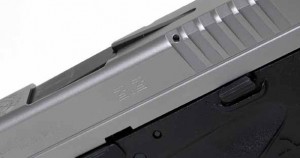 The loaded chamber indicator pops above the slide when you chamber a round.

The polymer frame on my gun is colored black, but Springfield offers gray and flat dark earth frames, too. Its gripping areas, including the forward face of the ample and rounded trigger guard, are covered with an improved version of Springfield’s All-Terrain texturing, with the more highly-raised gripping rectangles having their top edges slightly rounded. The dust cover features a picatinny accessory rail on which I was easily able to place and remove an Insight Technology X2 Subcompact LED light.

I found target thumb rests at the top of the grips. These are matching depressions that can function as a thumb rest. Springfield included these because of handgun import regulations that permit arms only if they receive enough points for having “Sporting Purposes” features. The XD thumb rests are officially recognized as having target or sporting purposes and thus get Springfield needed points. For those choosing not to use them, they don’t interfere at all with an alternative gripping method. 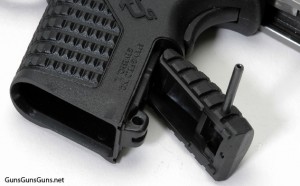 You change the backstrap insert by by drifting out a hollow pin.

The lower rear of the backstrap has a hollow-pin retained removable insert, two of which come with the gun. Each insert is arched, with one having a taller arch in order to help a wide range of hand sizes obtain and keep a good, solid grip on the pistol.

If you purchase the aforementioned seven-round extended magazine (MSRP = $39.95), two spacing collars are furnished, which provide a continuity of gripping surface with the otherwise-protruding body of the magazine. The rear of the collars are dimensionally shaped to provide this continuity regardless of which grip insert you use.

The extended mag features the same treatment as the grip.

Back up top, the all-steel machined, stainless or melonite-finished (i.e., an EPA-approved U.S. version of a Tenifer-type metal treatment) slide sports six diagonal and wide-spaced grasping grooves at its rear. The sights are dovetailed into the slide and are windage adjustable, both front and rear. The XD-S uses a fiber optic front sight, and two spare inserts—one red and one green—come with the gun. A red insert comes in the mounted sight. The Novak-style rear sight features white dots on either side of its square notch.

The XD-S front sight is new, and it prompts the first negative thing I can say about the whole package. Not for nothing do users of fiber optic sights carry a small supply of replacement tubes—they can break easily. To the good, the sight does stand out and, as noted, Springfield supplied two extra inserts, along with instructions in the owner’s manual on how to install them. To the bad, the brightness of the rounded rear of the insert made for a poor sight picture when I was shooting groups. On the other hand, this brightness helps you pick up the front sight under less-than-ideal lighting conditions. 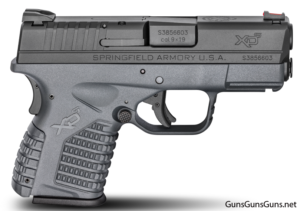 The XD-S with the gray frame.

The blued, hammer-forged barrel is conventionally rifled. The barrel locks up into the slide at front and rear. The front of the barrel has a slightly enlarged annular band, and the chamber hood fits in the ejection port window.

A captive dual recoil spring is employed with the front head of the recoil spring guide protruding slightly from the slide’s face. Four rails guide the slide, with the two front rails as part of the steel locking block and the two rear rails molded into and part of the polymer frame.

The other controls remain equally simple. The large, grooved, all-metal takedown lever is on the frame’s left-forward section. To operate it, move the front portion of the lever up through a corresponding relief cut in the slide. The metal slide stop on the upper-left center of the frame is slightly protected by a molded ledge beneath it (more on this a little later). The round and circularly-grooved magazine catch is ambidextrous and easily releases the magazine.

Finally, a number of accessories come with the XD-S. The shipping box is a sturdy, hard-sided, lockable polymer case with removable foam lining and a gun cable lock (good for storage or transport) along with a bore brush. The best part, though, is the polymer paddle holster and a belt-slotted dual magazine carrier. 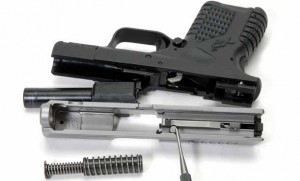 The XD-S disassembled. The passive firing pin safety is indicated.

Gun disassembly is easy, however. Simply remove the magazine, double-check the chamber is empty and, while depressing the grip safety, retract and lock the slide open. Now for me, I fumble this otherwise-simple action because the slide stop is quite flush to the frame and the frame has a raised ledge surrounding the lower portion of the slide stop, as noted earlier. I had to make a conscious effort to get more finger beneath the slide stop to lock it back. Also, it took me a few times to remember to depress the grip safety as part of the disassembly.

After you lock the slide back and raise the grooved takedown lever, allow the slide to run forward gently against the recoil spring pressure. The slide halts its forward movement after returning to just about its original position and will not come off the frame until you pull the trigger to release the firing pin striker from the sear. (As in other guns in which you must pull the trigger prior to disassembly, it’s obviously very important to doubly ensure the gun is empty.) Note: You can’t get the slide off with a magazine in the gun. 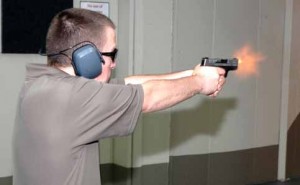 On the indoor range at the Lower Providence Rod & Gun Club in Oaks, Pa., the gang and I shot at 15 yards using Black Hills 230-grain JHP, Magtech 230-grain JRN and Winchester White Box 230-grain JRN. The best five-shot groups I fired: 3.5″, 3.46″ and 2.75″, respectively. We obtained similar groups with the X2 light installed—the bullets’ point of impact was not affected.

Here is our chart, which includes velocities obtained with a Chrony Master Chronograph:

During this test, we encountered no malfunctions of any sort. 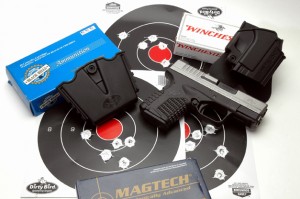 I also tried out the concealment paddle holster and mag carrier. Both did their jobs well. One nit to pick: One of the two pouch holders provided a very snug fit for the magazine. My fix involved exposing the full carrier to strong sunlight for a few hours, which loosened it slightly. (I didn’t heat the material because I’ve created a mess more than once doing so!)

Bottom line? We all liked the gun. And perhaps best of all, the Springfield XD-S is supported by a lifetime guarantee.