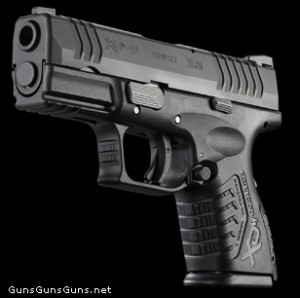 The XD(M) Compact from the front-left.

The first time I handled a Springfield Armory XD pistol, it was called the HS2000 and was manufactured in Croatia. The HS2000 was eventually adopted by the Croation military and law enforcement as its standad-issue sidearm, and it continues to fill that roles to this day. In 2002, Springfield negotiated licensing rights and changed the name to XD (i.e., Xtreme Duty) and has since expanded the line to include numerous models in different calibers, barrel lengths, finishes and frame configurations.

The XD is a striker-fired, delayed-blowback centerfire handgun with a safety lever in the trigger’s face, a drop safety and a grip safety. And Springfield has upgraded the XD line to a more modern configuration, including a new grip. The slide was contoured, and Springfield added an interchangeable backstrap to what was already a very good grip. Springfield calls this gun the Modern XD, or XD(M), and it originally held 19 rounds of 9mm in a double-stack magazine.

Fast-forward to last fall: Springfield has cut the barrel and slide to 3.8″ and named this offspring the XD(M) Compact. It also reduced the frame and added a shorter magazine with less capacity, taking the XD series to a whole new level by making it easy to change from full-size, high-capacity to a compact. You can change the XD(M) Compact from a concealed carry companion to a service-size pistol with just a simple magazine change. Large enough, but small enough.

I obtained a sample of this pistol chambered in .40 SW (it’s also available in 9mm and .45 ACP) and have written up my impressions below.

The .40 SW XD(M) Compact weighs 27 oz. with the short magazine, which offers very little space for a pinky finger. Because the grip is the most difficult part to conceal, this makes some sense, but like all things in life there’s good and bad—more concealable makes it harder to control.

The XD(M) Compact in .40 SW comes in a black polymer box with both an 11-round magazine and a 16-round magazine that wears the X-Tension, a magazine boot that makes the gun feel like a full-size XD(M) because it fills the empty magazine space to match the grip frame. The matte finish on the stainless steel slide over the black polymer frame creates a very attractive two-tone appearance (a blued finish is also available). The match-grade barrel is treated with melonite to increase lubricity and reduce wear.

The dovetailed sights offer three white dots for target acquisition. The rear is Novak-style with serrations on the face to reduce glare, and the front sight offers a corresponding white dot.

A dual magazine pouch, polymer paddle holster and magazine loader are included. Two spare magazine X-Tensions are in the box for another pair of high-capacity magazines or to change the backstrap configuration of the one supplied.

This pistol includes all the features Springfield calls “The M Factors,” which include:

The M Factor goes further, featuring an exceptional grip angle that has been carried over from the original XD. The angle and depth of each grip contour has been calculated for maximized shot-to-shot control. Deep-cut slide serrations create a positive grasp surface in the event you must manipulate the slide under stress or with wet hands.

My Take: Forward Slide Serrations
Forward cocking serrations are controversial, but I happen to like them. While loaded-chamber indicators are nice, there’s nothing like seeing a round in the chamber before hitting the street. Having forward serrations allows me to roll the slide back and see brass.

The M Factor also includes an enhanced short trigger action with minimal reset and a “Minimal Error Disassembly” process, and the “Maximum Reach Magazine Release,” which is accomplished by contouring the new grip so most hands can reach the button without twisting or adjusting the shooting grip.

I had no doubt the XD(M) Compact could shoot tight groups at 25 yards from a bench rest—every XD pistol I’ve tested has proved exceptionally accurate. This model was no different. Using several Giles Bags from The Wilderness, I shot five-round groups at 25 yards to see just how accurate the XD(M) could be. Using a number of street-proven loads, I shot on Birchwood Casey Dirty Bird targets and measured the holes at their widest point. I also shot five rounds of each load over the screens of my Shooting Chrony chronograph placed 10 feet from the muzzle. The results:

I concluded the test with a number of my favorite range drills because I believe they’re a great way to see where you stand on fundamental skills.The El Presidente, the Hackathorn combat-modified El Prez (i.e., shoot to slide lock before reloading, and move while you shoot), and the Bill Drill are quintessetial. 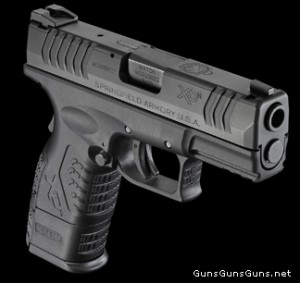 The XD(M) Compact with the magazine extension.

I then shot a new drill (to me) that my friend Rich Grassi, editor of The Tactical Wire, calls “The Test.” In this drill, you fire 10 rounds in 10 seconds from 10 yards starting from a low-ready position at an 8″ bullseye target. The objective: stay in the 8″ circle with all shots. Using Hornady 180-grain TAP-CQ ammo, I was able to shoot this drill clean after several attempts. I was surprised at the difficulty, but trust me, it’s not as easy as it sounds!

After several hundred rounds of various ammo styles, the XD(M) Compact didn’t suffer a single malfunction. The three-dot sights proved very easy to use, and the upgraded magazine release made reloads efficient and speedy. The grip allow the gun to point naturally, and the grip safety was easy to use.

The trigger on my test gun was exceptional. It offered a short travel length with a very snappy reset, which is exactly how I want my trigger to be on a fighting gun.

I found the Springfield Armory XD(M) Compact to be a very reliable handgun at a very reasonable price. The carry box and added goodies make it all the more desireable, and its ability to go from service-size to concealed carry size just seals the deal.