In the 20 years since its founding, STI International, Inc has risen from being a small shop manufacturing parts for 1911 pistols to manufacturing high-end pistols for not only competition, but also law enforcement, military, and civilian use. To celebrate the milestone, STI is proud to unveil its official 20th Anniversary Pistol. 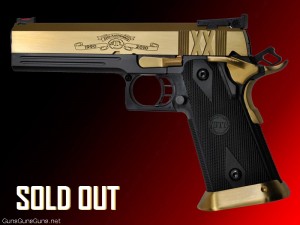 The Limited Edition STI 20th Anniversary pistol is a double-stack 1911 chambered in 9mm, .38 Super, .40 SW and .45 ACP. It couples STI’s patented receiver with desirable accessories to produce a head-turning pistol. The controls are STI International’s ambidextrous thumb safeties and knuckle relief high-rise beavertail grip safety, both TiN coated. The TiN (or Titanium Nitride) coating is gold in appearance but is far more durable and scratch resistant—so much so that TiN coating is most often used for coating machine tools to enhance performance and increase the life of the tool.

The full length steel bar stock slide features custom serrations specific to this model, custom engravings, and a TiN coating along with the magwell. The barrel is a 5″, fully ramped and supported bull barrel and, along with the frame, is PVD coated. This firearm comes standard with an STI square hammer, a patented STI trigger system, the STI S-7 sear and a titanium strut for smooth, reliable function. The STI 20th Anniversary pistol features an STI adjustable rear sight and a Dawson fiber optic front sight. To enhance collectability, STI will only build 200 of these pistols, and the serial numbers reflect this (1 of 200, 2 of 200, etc.).

Update: All 200 pistols were spoken for within 48 hours of going on sale.