Looking to buy a laser sight and light combo for your pistol but not sure where to begin? I’ve combed through the nearly 50 different models in the wild today and identified the six best. All are top-rated with excellent reviews by actual buyers/users. 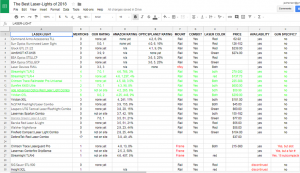 The author investigated nearly 50 different laser-lights to find the best on the market.

First I pulled together a list of all handgun laser-lights, and then I filtered out all discontinued models and all frame-mount/trigger guard-mount models designed to fit only one pistol. Next I researched each remaining laser-light on Amazon.com (and to a lesser degree, OpticsPlanet.com) to gauge how its performing with actual buyers and users.

A couple years ago I examined 33 million Amazon product ratings and learned the average rating across all products is 3.95 stars. The margin-of-error behind each average rating falls to a workable level after roughly 100 votes, and the percentage of the dreaded 1-star vote averages around 8% (to read more about this study, check out my Amazon.com Star Rating Tips article).

With that info in mind, I was able to pick out the obvious winners and losers on Amazon. I also read through numerous reviews on Amazon to look for red flags, quality confirmations, customer service gripes, etc.

Finally, I performed a Google search for “the best handgun laser sights.” I clicked through 12 of the results and copied the names of all the laser-lights listed by those authors into one list to see which laser-lights were mentioned most frequently.

What did all this wisdom-of-crowds data reveal? With no further ado, here are the top six rail-mount handgun laser-light combos available so far this year: 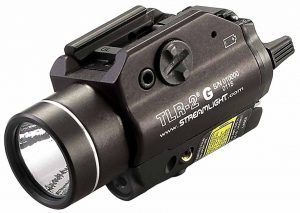 The Streamlight TLR-2 is built in an aluminum, sealed housing, and you can get it with either a red or green 5mW laser, and a 300 lumen LED light or a 630 lumen LED light. Streamlight says it fits all mil-std 1913 picatinny rails. Other features include:

On Amazon, the TLR-2 holds an outstanding 4.6 average rating across roughly 768 votes, with only 3% of those votes falling into the 1-star camp. It also appeared in four of the 12 “best of” lists I found via Google. 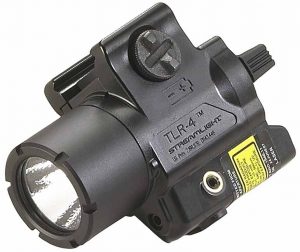 The Streamlight TLR-4 is built in a polymer housing with an anodized aluminum facecap, and with a 5mW red laser and a 125-lumen LED light. Other features include:

On Amazon, the TLR-4 holds an outstanding 4.6 average rating across roughly 1,237 votes, with only 4% of those votes falling into the 1-star camp. It also appeared in three of the 12 “best of” lists I found via Google.

Think of it as the budget version of the TLR-2: less than half the price, with a plastic housing and a less-powerful light. 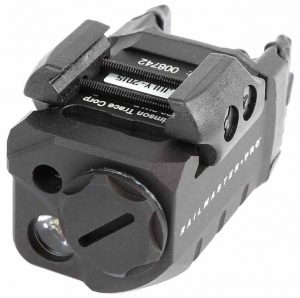 The Crimson Trace Railmaster Pro Universal is built in an aluminum housing with either a red or green 5mW laser and a 100-lumen LED light. Crimson Trace says it fits most firearms that feature a mil-std 1913 picatinny or weaver-style accessory rail (with a minimum of 1.0625″ from the recoil lug). Other features include:

On Amazon, the Railmaster Pro Universal holds a 4.4 average rating across roughly 88 votes, with only 3% of those votes falling into the 1-star camp. It also appeared in one of the 12 “best of” lists I found via Google.

The low-ish vote count means the Railmaster Pro Universal’s 4.5 star rating is subject to a margin-of-error of ±0.2 stars. So, in a worst-case scenario, it’s possible (but unlikely) this laser-light’s “true” rating—i.e., its rating if every human voted—clocks in at only 4.3 stars. But that’s still above average, and it’s also possible (but unlikely) its true rating is a stellar 4.7 stars.

You can mount the X400 Ultra on a picatinny or universal accessory rail system. Other features include:

A remote pressure switch is optional. You can adjust this sight for windage and elevation through an external toggle, and an adjustment tool is included.

On Amazon, the X400 Ultra holds a 4.3 average rating across roughly 98 votes, with 8% of those votes falling into the 1-star camp. It also appeared in two of the 12 “best of” lists I found via Google.

It’s the most expensive handgun light-laser by far on the market, but if it fits your budget, it’s worth a look.

The Ade Advanced Optics Red Laser Light Combo is built in an aluminum housing with steel components, and a red 5mW laser with a 200 lumen LED light. Its attaches via standard size weaver/picatinny mounts. Other features include:

On Amazon, the Red Laser Light Combo holds a 4.2 average rating across 265 votes, with 6% of those votes falling into the 1-star camp. It also appeared in three of the 12 “best of” lists I found via Google.

I hadn’t heard of Ade Advance Optics, and all other cheap laser-lights I’ve found have received poor ratings and reviews. However, this laser-light is by far the cheapest, above-average device I’ve found, and it’s the only cheap laser-light to make this list. Couple the low price with Amazon’s easy return process, and it seems worth a gamble. 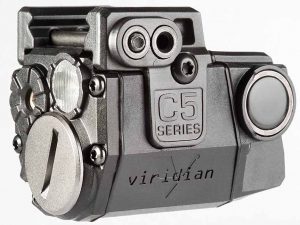 The Viridian C5L is built in an aluminum housing with polymer covers and either a red or green 5mW laser, and a 100 lumen LED light. Viridian says its C-series laser sights fit all handguns equipped with a tactical rail. Other features include:

On Amazon, the Viridian C5L-series lasers hold a 4.25 average rating across 448 votes, with 9% of those votes falling into the 1-star camp. It also appeared in six of the 12 “best of” lists I found via Google.

The C5L therefore features a little better than average star rating and a slightly worse than average 1-star rating ratio, and it appears in more “best of” lists than any other laser-light I’ve seen.

This list ignores frame/triggerguard-mount laser-lights because those devices fit specific handguns only. However, it’s worth noting that the three manufacturers making that type of laser-light—Streamlight, Lasermax and Crimson Trace—make them for multiple handgun models. Streamlight, for instance makes its TLR-6 laser lights for 18 different subcompact pistols. And, the Crimson Trace and Streamlight devices hold above-average ratings on Amazon, so if you prefer a one-gun-only, frame-mount laser-light, check out their offerings.

That’s it for now. Hopefully some new, good rail-mount laser sights will hit the market this year, and I’ll keep tabs on the current crop, too.

(Disclosure: GunsGunsGuns.net has an affiliate relationship with Amazon.com, which means Amazon might pay us commission dollars if you click-through to them and make a purchase.)

1 thought on “Survey Says: the Best Handgun Laser-Lights of 2018”