Since our launch in September 2010, GunsGunsGuns.net has included a star rating and comment system that allows every reader to rate, on a scale of 1–10, each handgun listed on our site. Such wisdom-of-crowds voting systems aren’t new; these days this type of crowd-sourced data helps amateur astronomers identify the best telescopes on Amazon.com, diners find popular restaurants on Yelp.com, couch potatoes locate good movies on Netflix, etc. Now, with roughly 60,000 votes cast across 1,650+ handguns, we’re ready to begin leveraging the ratings in an article series called “Survey Says” to help you identify the top handguns in a particular niche.

The first niche: pocketguns. In recent years, this handgun type’s popularity has exploded with numerous states relaxing concealed carry restrictions and firearm manufacturers rushing to offer new pocketguns. But with so many models available, where should a shopper start? Read on!

GunsGunsGuns.net contains pages for 255 subcompact handguns. Not all are small enough to be pocketguns, of course, and not all belong on a “best of” list. To begin filtering them down, I asked myself, “What’s a pocketgun’s primary purpose?” The answer: It’s a last-ditch self-defense gun. You don’t use it to hunt, compete or really even just plink around.

So, what makes a good last-ditch self-defense gun? First, caliber. After reviewing this real-world, human-shooting study by Greg Ellifritz, I’ve concluded .380 ACP is the weakest cartridge you should employ for self-defense, if you have a choice. Below .380 ACP, the failure-to-incapacitate rate appears to roughly double.

What about capacity? In a life-or-death struggle, I’d like to have at least four or five rounds. There are many fine derringers out there, but their two-round limit is a deal-breaker for me.

Finally, size. A pocketgun should fit in a pocket, but of course there’s wide variation in pocket sizes, from coat pockets, cargo pockets, rear Levi’s pockets, front pockets, etc. At the 2012 SHOT Show, I handled every .380 ACP and 9mm subcompact I could find and tried stowing them in my rear pants pocket in a pair of khakis (I’m 6’2″ and 180 lbs., and wear size 33Wx34L pants). As a result, I came up with the following maximum pocketgun dimensions: 5.77″ long and 4.4″ tall. (Note: The guns maxing out these dimensions are borderline.)

When I apply these filters to the 255 subcompacts, they eliminate all derringers and revolvers, leaving just 52 semiauto handguns. 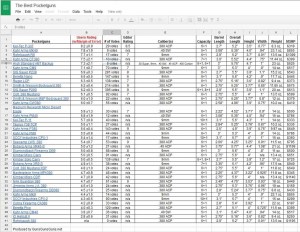 Click the above screenshot to go to the pocketgun ratings spreadsheet.

I’ve listed each of these 52 pocketguns in a spreadsheet (click the screenshot at the right to see it). Each pocketgun’s listing includes its caliber, measurements, MSRP, editor’s rating (for the 17 we’ve been able to review in-depth), users rating and number of votes. The list is sorted by users rating from highest to lowest. Each gun’s name is a clickable link that takes you to that gun’s info page on GunsGunsGuns.net—go there for more info, its photo(s), links to stores selling it, etc.

Each gun’s users rating is the average rating for all the rating votes it has received so far. This metric also includes its margin of error. I calculated each average rating’s margin of error with a statistics formula that considers the number of votes the gun received and the standard deviation between those votes.

How To Use This Data

Should you look at this list and immediately conclude you should run out and buy one of the top-rated pocketguns with a significant number of votes? No, I don’t think it should be that simple. First, a lot of other factors can and should enter into each person’s purchasing decision, including price, caliber, size, manufacturer, editor’s rating, feel (i.e., how a gun feels in your hand and shoots for you), action type and even appearance.

Also, as you can see, many of the guns’ margins of error overlap. For example, the Kel-Tec P-3AT’s 7.7 rating includes a margin of error of ±0.7, so its true rating, in a worst-case scenario, could actually be 7.0, which would currently rank it a little lower on the list.

Important: Margin of Error Overlap Doesn’t Mean Statistical Tie
Margin of error works on a bell curve. That means worst- and best-case ratings are unlikely because the farther away from a reported average rating you get, the less likely it reflects reality. And, for one gun to suffer a worst-case rating and another to enjoy a best-case rating at the same time is much less likely. So yes, the top three guns on the list—the Kahr Arms MK40, the Rohrbaugh R9 and the Kel-Tec P-3AT—are apparently top pocketguns.

The point? I’d use this list as a starting point. First, I’d draw a line through it around 25th place and simply ignore the guns below that line. Why 25th? When I compute the average rating across all 60,000 votes in our rating system, I get 6.0. To me, that says a dead-average gun is rated 6.0. After roughly 25th place, none of those pocketguns can attain a 6.0 rating even under best-case scenarios. And I’d like to buy an above-average gun.

Then I’d apply my other filters, starting with my admittedly meager budget (adios, Rohrbaugh) and caliber (I prefer .380 ACP in pocketguns due to recoil considerations). I’d lean toward striker-fired guns, I’d exclude a few manufacturers and I’d consider our in-depth reviews and editor ratings (when available). That should get me down to around four or five guns. Then I’d set out to handle and hopefully shoot those guns, take one more look at the user ratings and pick a winner from there.

One last thought: Keep in mind the probable instability of ratings with low vote counts and extra-large margins of error. If the margin of error is up around ±2, don’t put a lot of stock in the rating because the gun’s true rating could fairly easily be one point higher or lower.

As these pocketguns receive more votes, the rankings will likely shift a bit, and the margins of error will slowly firm up. Unfortunately, the spreadsheet doesn’t update automatically; I have to do it manually because the apps don’t talk to each other. But I will update it periodically (note: I last updated it Feb 21, 2021).

If I’ve failed to include a model, please let me know via the Contact form at this link, or via the Comment form below this article. And let me know if you have any questions, concerns, suggestions, thoughts, etc.

Remember, the above describes my filters and my process, which are based on my conclusions, opinions and biases. Yours may differ and lead you in a different direction.

Also remember that crowdsourced reviews and ratings in general are not without limitations, and that applies to these gun ratings, too. So again, don’t look at a gun’s rating as the final word.

Limitations aside, however, if you’re in the market for a pocketgun and feeling overwhelmed with the number of choices available, this data should help you narrow the field. Good luck!