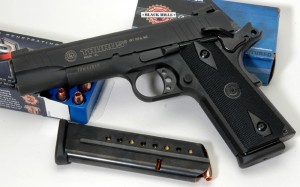 Taurus continues adding new calibers to its 1911 pistol, which was introduced two years ago in .45 ACP. The next two calibers added were .38 Super and 9mm. I was most interested in the 9mm model because traditionally the short 9mm cartridge doesn’t want to feed well in a 1911 because the round is simply too short for a 1911 magazine.

The basic Taurus PT 1911 (as marked on the slide’s right side) is a full-sized 5″-barreled Government Model 1911 with a forged frame and slide in bead-blasted blue or stainless steel, with the addition of a dust cover-positioned accessory rail on some models. All use a full-length metal recoil spring guide rod and the now-necessary hollow recoil spring plug. The supplied bushing wrench isn’t needed for disassembly because the bushing is simply finger tightened to the slide and barrel, but it does help in depressing and controlling the hollow recoil spring plug. (The magazine base plate will also suffice for this job.)

The guide rod flange is beveled on its lower rear face where it bears against the two “feet” holding the barrel link and link pin. This modification, a custom touch, is thought to improve the 1911’s function by allowing the flange and barrel “feet” to mate more closely, thus improving overall reliability.

The Novak sights on the author’s sample gun are dovetailed into the slide and secured with an Allen screw.

In 9mm, the barrel features a fully-supported chamber, which means the cartridge case is almost completely surrounded by metal and its feed ramp extends downward into a now-relieved portion of the frame. The ejection port is of a modern design that mimics the custom gunsmithing alteration of “lowered and flared.” This translates into making the port larger to facilitate ejection of the fired case by lowering its lower right edge as well as adding a light, centered cut or bevel to eliminate the denting of ejected brass (common to the original design, which annoys many users but does no damage to the case).

Upending the slide reveals the upper part of the Series 80-based firing pin safety system. I removed the firing pin block and its spring and found that the spring is tapered, with the larger end located the furthest away from the solid firing pin block. The extractor is properly tensioned and the slide’s cartridge-pick-up rail has its forward edge angled to enhance cartridge feeding.

The bead-blasted, natural-colored barrel is slightly enlarged where it’s encircled by the barrel bushing. The bright-polished barrel hood is marked “CAL. 9mm,” with the gun’s serial number on its right side and that number repeated directly below on the slide and beneath this, “Forjas Taurus SA” (i.e., Taurus Forge, South America). The serial number is repeated on the left side of the frame’s dust cover.

Now to the frame. The arm of the lower portion of the firing pin safety system is visible. When reassembling the gun, make sure this arm, which actuates the upper firing pin block, is flush with the frame. The grip’s front strap combines machine checkering centered in vertical grooving. The flat mainspring housing is also machine checkered, as is the magazine catch, while the slide stop is horizontally grooved.

The longitudinally-grooved ambidextrous safeties work with a satisfying click. The left and right safety shafts are tongue-and-groove but, contrary to the ususal mating of straight-edge-meets-straight-notch, here the two parts meet in a “+” lockup. The safeties are further held together by the right grip panel, which covers an arm of the right-side safety. 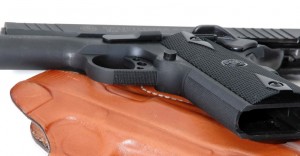 The 1911 features 30-LPI checkering on the frontstrap and beneath the trigger guard.

The plastic grips feature molded checkering and large diamond shapes surrounding the mounting holes. The grips affix with blued hex-head screws. The grip panels narrow to their respective centers, giving a pleasing grip. This feel is supported by the well-shaped and nicely, if not precisely, fitted beavertail grip safety, which has the now-almost-obligatory hump at its base. Along with this is the 30-LPI machine-checkered and flat mainspring housing, with the same metal treatment on frontstrap and the bottom of the trigger guard.

The ramped Novak front sight and Novak-style rear sight (with the now-almost-obligatory three white dots) are in dovetail cuts in the slide with both further secured with an Allen screw. Wide grasping grooves, four front and six rear, allow a good purchase on the slide, while the rounded-edged grooves will not drag on a holster or clothing.

The polymer trigger has three lightening holes and a trigger overtravel screw. The hammer is rounded and contains the Taurus Security System. In short, this is a key lock with the lock in the hammer. Turn the lock 180 degrees clockwise with one of the two supplied keys until you hear or feel a click. The safety lock will now stick up from the body of the hammer, preventing the hammer from being raised. 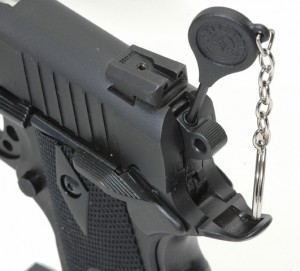 Turning the key moves a shaft downward to bear against a shelf on the hammer strut, immobilizing the 1911.

Disassembly is as standard with full-length, solid-guide-rod-equipped 1911s. After ensuring the gun is unloaded and the magazine removed, depress the recoil spring plug and, while holding it down, rotate the barrel bushing clockwise, then release the plug. Next, remove the recoil spring. Then retract the slide so that its take-down notch (rearward of the slide catch notch) is positioned above the rear of the slide stop. This allows you to remove the slide stop, then take the slide forward and off of the frame. Once all this is done, remove the guide rod to the rear—with the barrel link folded either forward or back. Reverse rotation of the barrel bushing to remove it, then remove the barrel, now with barrel link folded forward.

Interestingly, Taurus engineers have their own idea of what a 9mm 1911 magazine should look like. The two supplied magazines have polished and blackened metal bodies with matching cartridge witness holes on either side numbered 2–9. The follower is one-piece polymer and colored yellow. The polymer base plate is removable, retained by an inner metal plate. The magazine is marked “MADE IN BRAZIL.”

Next, two longitudinal grooves run the length of the body forward of the witness holes. The grooves are intended to prevent the loaded 9mm cartridges from shifting forward and back. This shifting is one of the causes of malfunctions in 9mm-chambered 1911s—the 1911 design, as great as it has proven to be with now over a century of use, is simply not 9mm friendly. 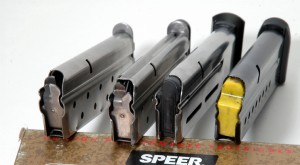 The original fix done by Colt featured a spacer at the rear of the magazine. I have magazines from Springfield Armory that have a groove down the front face of the nine-round magazine; a Wilson Combat magazine, which uses a combination of rear spacer and vertical side grooving; and Para magazines, which follow the Colt pattern. I used these with this sample gun and all worked, but I can’t say this will apply to your 1911.

One more note: There’s some confusion on the Internet about the following information that was on the Taurus Web site regarding magazines for the 9mm 1911: “….We’re now offering our popular 1911 model with 9+1 (11+1 with extended magazine)…” I contacted the Taurus PR representative who advised me this is not correct. [There’s] “No such mag!” was the emphatic reply.

Now to the range work. I was very curious to find out if I had a serious 1911—one that reliably functions with most ammunition brands and bullet types—or a prima donna that will only work with one or two ammunition choices (as does my personal Series 70 Colt). 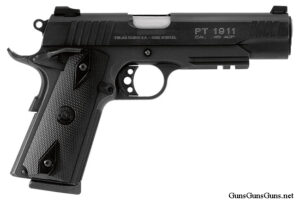 A .45 ACP model with an accessory rail.

Doing accuracy work, my shots hit low when I used the front sight outline when sighting, but shot to point-of-aim if I used the white dot insert in the sight. As an aside, I find these dots in the rear sight to be a distraction to such accuracy work because my eye wants to focus on them rather than the dot in the front sight. (Hint: Magic Marker cures this problem.)

The 1911 B-9 I shot was not choosy about ammunition, at least what I and my friends fired, which included Remington Golden Saber 147-grain JHP, CCI Speer Gold Dot 124-grain +P, Federal 124-grain Hydra-Shok JHP, Black Hills 124-grain JHP and Hornady 124-grain Critical Defense HP/XTP. Plus Cor-Bon Performance Match 147-grain JRN and Winchester 124-grain NATO JRN, along with economy 115-grain ammo from Remington, Federal and Winchester, as well as lead-bullet reloads.

Of course, accuracy varied by shooter, running from one large 4″ group to a couple of keeper 1.5″ five-shot clusters. Groups at 20 yards fell mainly in the 2″–3″ range, with the occasional group of 1.5″ using 147-grain Cor-Bon Performance Match and 1.75″ with Hornady 124-grain JHP/XTP.

Here are the accuracy results from five-shot groups fired at 20 yards while seated using a gun bag rest for support:

The trigger pull was OK. Out of the box, it measured 5.75 lbs., and after extended shooting it dropped to 5.25 lbs.

With the first 1911 (chambered in .45 ACP), I had no complaints—the gun did everything I asked of it. I’ll stand by this for the 1911 chambered in 9mm. I also noted then that fit and finish of the pistol were adequate; that observation applies to this gun as well.

Would I change anything? Yes. I removed the right-side thumb safeties when I wore the gun because invariably the right side safety gets bumped off safe while holstered.

In 9mm, I would say the Taurus 1911 is good for a nice range day, action shooting sports competition and personal protection. If or when my check book can take the hit, I’ll likely buy this sample.

One last item of note from the Taurus USA Web site: “…The Taurus Unlimited Lifetime Repair Policy is for the life of the gun…not the buyer. The full terms are we will repair your Taurus firearm FREE OF CHARGE for the lifetime of the firearm.”

You certainly can’t beat that! 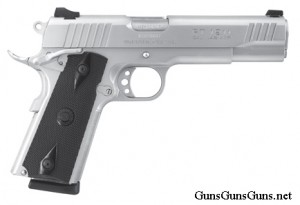 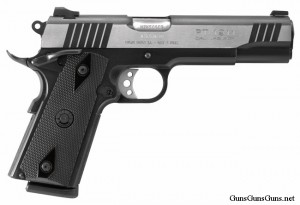