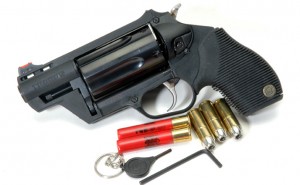 At press time, the Taurus Judge Public Defender Polymer (PDP) revolver is the newest of the Taurus Judge series. The series currently includes 17 models (per the Taurus website) chambered for five rounds of either .410 2.5″ or 3″ shotshell and .45 LC, which can be shot interchangeably. Available frame types include steel, alloy and now polymer.

The original Taurus Judge was introduced in 2006, with early models hitting stores by early 2007. The buying public snapped them up. Taurus responded within six months or so with an Ultralite (i.e., an alloy frame) model, followed by the Public Defender versions, which are essentially a scaled-down Judge.

In this review, I take a look at the PDP. 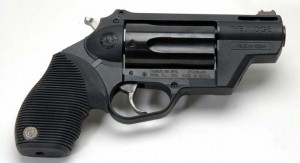 The view from the right.

The PDP has a 2″ barrel and weighs 23 oz. Its cylinder weighs 9.5 oz., and the frame with rubber grip attached runs 13.5 oz. The barrel, cylinder and small parts are blued steel. The frame is in two parts—polymer and steel. The slightly enlarged spur of the exposed hammer is checkered, and the hammer contains the Taurus key-based security system. The curved trigger wears vertical grooves. Both have no sharp edges and have coloration or flame blueing mimicking that found on these parts in Colt’s Single Action revolver.

The extractor rod is naturally short due to the 2″ barrel, allowing but minimal extraction of either the .410 or the .45 LC cases. The knurl-tipped rod is protected by a barrel underlug; the barrel has shallow rifling. 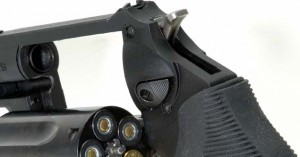 The cylinder release is located up and in.

The PDP has a novel cylinder release position lying flush into the lower left rear side of the rounded recoil shield. When we were testing the gun, we fumbled the first few times any of us used this release because all of us are accustomed to the normal location of this part in earlier Taurus revolvers, as well as Smith & Wesson products. This awkwardness was quite momentary, though. After only a few uses, none of us had any further problems. In fact, one of my friends observed he really appreciated this innovation because it eliminated the chance his shooting-hand thumb could be cut by the cylinder release due to heavy recoil.

The ramped front sight contains a tubular, orange-tinged red polymer insert held front and rear by narrow encircling metal bands on the sight body. Two hollow cross pins hold the otherwise ramped front sight to the barrel. One of these pins fell out after a third shooting session. Judicious use of thread tightener seems to have fixed the problem. If you do lose one, however, the pins are commonly available. 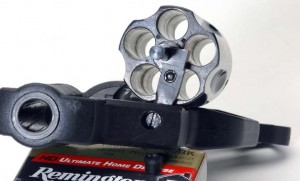 The rear sight is integral to the frame, with its rear sight blade protected on all four sides by a raised portion of the frame. The sight blade’s square notch is wide and shallow, and adjustable for windage but not elevation using a right-side mounted slotted screw. I had difficulty when doing precision shooting with these sights—the front sight’s outline appears fuzzy because the domed rear portion is slightly larger than the rear notch opening. This combination turned controlling front-sight elevation into guess work. To the good, though, this set-up allows for fast sighting in emergency use—the revolver’s purpose.

We shot the new Winchester PDX1 2.5″ .410 round specifically developed for the Taurus Judge line. (The round works in the new Smith & Wesson Governor, as well.) The PDX1 is a reduced-recoil round, loaded with three 000 shot-sized discs backed by 12 BB-sized shot pellets, along with five rounds of Winchester’s OOO buck .410 hunting load.

One of my friends was quite interested in shooting this gun and purchased more PDX1 ammo, along with the Remington HD Ultimate Home Defense 2.5″ .410 load, so we had a lot of it. The latter round contains four O-sized buckshot.

Recoil was snappy, but not painful.

In overview, the PDP is quite effective with all these loading combinations at distances from basically muzzle contact back to 15 feet. Any longer distance saw shot missing the Birchwood-Casey Shoot-N–See Silhouette target center, if not the entire target backer. Patterns ran from fist-sized (2.5″) at three feet to 10″–12.5″ in diameter at 15 feet.

Next we fired an assortment of .45 LC loads in a decidedly non-scientific manner. Whoever was next to shoot grabbed five or so rounds from whatever brand struck his fancy, then shot from his distance and target of choice—either the aforementioned center or Birchwood-Casey’s Dirty Bird 5.5″ bullseye. Not surprisingly, all the guys were much more interested in finding out what it was like to shoot the .410 shotgun round in a compact, lightweight revolver than how well they could shoot the .45 LC ammunition, although they were pleased they were able to make good hits. One of the guys took a very practical approach to his evaluation by sequentially engaging two IDPA targets at five yards multiple times with both shotshell and cartridge to determine how well or not he and the gun worked for self defense. He was satisfied the gun was quite usable for this task.

Here are our chronograph findings for both the shotshell and cartridge ammo. We used a Pro-Chrono Crony chronograph at 300 feet above sea level with ambient temperature of 80 degrees F. I’ve listed our five-shot averages:

No one thought the .410’s recoil was particularly unpleasant, but it was sufficient to discourage them from shooting more than a dozen or so rounds. The recoil experienced when shooting .45 LC loads was a non-issue. (I think the Taurus-brand Ribber—a horizontally-ribbed rubber grip—contributed greatly to this general observation.) Their only concern was to not mindlessly shoot up the factory ammo. 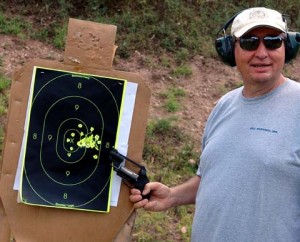 Irvin Gill likes the 6″ group he shot from 9 feet with the Winchester PDX1 Defender .410 shotshell load.

On another range visit, I performed the accuracy work using the Winchester 225-grain Silvertip Hollow Point ammo at 15 yards and Federal Champion 225-grain lead semi-wadcutter hollow point loads at 25 yards, and I found the aforementioned difficulty getting good sight alignment. My 15-yard groups measured 3″. While not great, it’s adequate.

I found my best shooting DA was done using a two-stage DA trigger pull in which you move the trigger quickly but only far enough to rotate the cylinder enough to lock up and put a live round ready to be fired. Hold the pull at this point, correct your sighting if needed and then finish the trigger press.

I also took this opportunity to use .410-to-.22 LR cartridge adapters at $19.95 each from Short Lane Fabrication (www.gunadapters.com). Ray Banister, the owner, was quite honest about his adapters, pointing out they were not all that accurate and misfires could be expected when firing DA with a revolver. He added that originally he made adapters for a 12-gauge shotgun to better teach his two young children the use of a 12-gauge.

I had one misfire per five shots and at 15 and 30 feet, with bullets tumbling and barely managing to stay within the outline of a reduced-size IDPA target, just as Ray said. They accomplish what he intended, though, providing no-recoil firearms training.

In review, I admit that when the Judge was introduced, I was ho-hum about it, having shot (or, more correctly, attempted to shoot) pheasants with a .410-chambered shotgun in my youth. The birds were generally quite safe. I moved up in gauge, was more successful and never looked back. Over the years, I’ve also had occasion to fire handguns that contained shot pellets, so the idea of handgun cartridges loaded with shot is not new. For example, the CCI .22 LC cartridge loaded with very small, almost dust-type shot has been around for years, used by some for pest control such as snakes and small critters.

Mid-20th century handloaders also took an interest in experimenting with loading fine shot in large-capacity handgun cases such as the .44 Special and .45 LC, as well as shortening a rifle cartridge case to dimensions compatible to the revolver charge holes. While doing all this, experimenters found the barrel rifling disrupted the pattern of the shot pellets. Their fix? Ream out the rifling.

Caution: You can’t do this now because it violates federal firearms laws, for without rifling you have an illegal, under 18″ barrel “shotgun.” I’ve shot some of these conversions, along with the CCI .22s and .45 ACP shot rounds provided to U.S. military pilots as part of a survival package if downed in hostile territory. I found them marginally effective at best.

Now, after having three friends help me with the range effort and with one of them buying a few boxes of .410 shells in anticipation of this get together, their observations are worth strong consideration. The simple answer: They (and obviously many others) like the concept of having a handgun that fires a shotshell as a great tool for self defense regardless of the ballistic efficiency (or not) of the shotshell caliber. Also, they liked having the ability to multiple-load the cylinder with a combination of shotshell and cartridge, or change the carry load as needed, expanding the possible applications of this handgun.

What do I think now? Shot placement is still king, but the shotgun aspect of this model helps address the concern for preventing over-penetration of walls within buildings. It also provides some wiggle room in the need for precision sighting and is a confidence builder—ask any present owner!

The PDP can be used for protection from two- and four-legged threats, as well as those that slither about. With all this, it’s certainly worthwhile.

Click here to read a handgun roundup containing info on all the .410-capable revolvers currently in production. 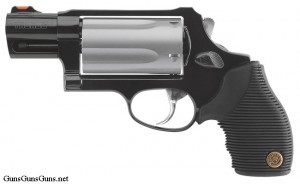 This version carries a titanium cylinder. 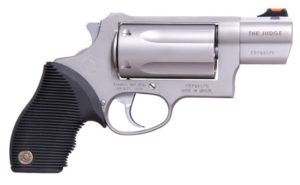 The Judge Public Defender with the stainless steel frame and cylinder. 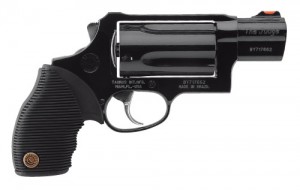