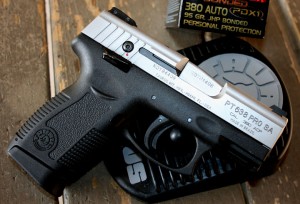 Recently I was able get a first look at new .380 ACP pistol from Taurus, the 638 Pro Compact, which had just arrived in the United States from the company’s Brazilian manufacturing facility. A media event was arranged as a joint venture between Winchester Ammunition and Taurus. At Winchester’s pistol range, a number of firearms media folks were given the opportunity to test and evaluate several new offerings from both companies.

The 638 is a bit of a departure from the current crop of subcompact/pocket guns, and I must admit I was taken with the new Taurus pistol. 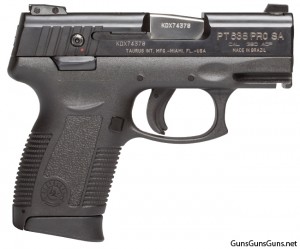 The 638 is just a bit smaller than a Glock 19. It’s  built on a black polymer frame the same size as that found under the Taurus 609TI Pro. The steel slide is available finished in blue or stainless.

The 638 employs a single-action trigger. The firing pin is pre-staged when you chamber a round. Pressing the trigger completes the cocking process and releases the striker/firing-pin.

In addition to the safety-lever on the trigger, Taurus has included an ambidextrous manual thumb safety located on the frame. The Taurus Security System is also built into the slide and activated with a special key.

A dual-column magazine feeds the gun and brings the capacity to a full 15+1 rounds. (You can get 10-round magazines for your pistol in the future.) The frame has a light/accessory rail, but it’s a compact version similar to that found on the Springfield XD compact. Taurus has molded checkering into the front and backstrap of the frame. 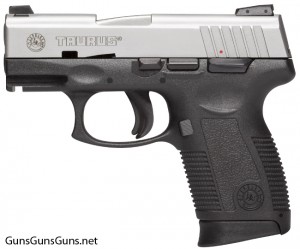 The 638 Pro Compact with the stainless slide, from the left.

The sights on the pistol are the white three-dot variety and are adjustable. For my money I can do without three dots to look at. I’d rather have an easy-to-see front sight and a muted rear sight. Putting twice as much light-reflecting material on the rear sight versus the front makes no sense from the shooter’s perspective. This is particularly true if the gun in question is designed for personal protection, which the 638 seems to be. 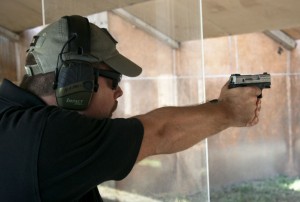 The author sends rounds downrange with the 638.

Trying my best not to be a range hog, I took several turns testing out the 638. I ran the gun using two-hands, single handed and support hand only to test its reliability. I ran rapid-fire drills against paper targets, and then I moved on to a plate rack set out at 15 yards. After I figured out my hold, the plates stood little chance. As long at the shooter did his part, the pistol would put the rounds on target.

All told I fired somewhere in the neighborhood of 150 rounds of Winchester ammunition through the pistol during the couple of hours I had to work with the gun. I believe I experienced one or two stove-pipe stoppages during the first couple of magazines, which were immediately remedied with a tap and rack. Experience has taught me Taurus pistols like to have a break-in period, and I’d expect this one to be no different.

Felt recoil was very mild. The weight and size of the 638 are considerable for a .380 ACP pistol, but that is not necessarily a negative. For new shooters or any gun owner who is recoil sensitive due to age or physical limitation, the 638 is a very attractive personal-defense pistol.

Final thoughts: While I look forward to a longer, more thorough review, I was very pleased with my initial experience. The 638 is brand new and just now arriving on our shores.