On my first look at the Taurus Curve when picking it up from King Shooters Supply in King of Prussia, Pa., I had mixed thoughts, starting with the obvious: the curved grip, and the apparent lack of sights. It was clear Taurus has come up with a novel design, and I dove into test and eval mode. My review follows. 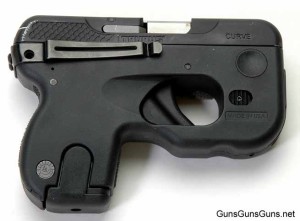 The author’s Curve, from the right.

The Curve weighs 10.2 oz. empty, carries a 2.5″ barrel, is double-action-only with a measured pull weight of 6.75 lbs., and features a semi-concealed spurless hammer. It measures 5.2″ long by 3.7″ tall and 1.2″ wide. The metal magazine includes a removable polymer base pad and holds six rounds of .380 ACP.

The Curve is built on a black polymer frame with a serial-numbered metal insert pinned into the frame by two cross pins. The serial number is visible through an oval opening in the frame.

The Curve features a black-oxide-finished, forged-steel slide that moves on two rails in the frame. It features rear grasping grooves. 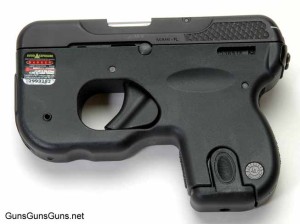 The author’s Curve, from the left.

There are no sights on this gun in the typical sense. Taurus etched two white crosshair lines on the slide’s rear face. And, a loaded chamber indicator (labeled by Taurus as the Limited Chamber Indicator) that lies center-rear of the ample ejection port pops up when a round is chambered to provide shooters a very wide but squat U-notch sight.

Taurus explains how to use these two “sights” in the owner’s manual: “The lines on the rear of the slide form a cross and align with the bore (center) of the barrel. Used in conjunction with the two ears of the Limited Chamber Indicator. … The point of aim for your Curve is at the bottom of the bulls-eye.” 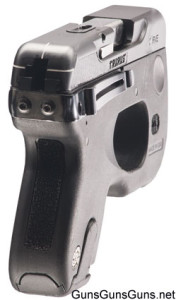 Taurus also offers a Curve with an integral light (two LEDs) and red laser from LaserLyte nicely fitted to the pistol beneath the dust cover and forward of the trigger guard. A separate owner’s manual from LaserLyte came with the gun, along with laser adjustment tools.

An external extractor is in the ejection port’s lower right side. The slide is marked MIAMI-FLA on one side and TAURUS and Curve on the other. Scaled grasping areas are rearward on the slide behind the ejection port. Taurus added a long relief cut midway on the slide’s bottom left so the large-headed takedown pin does not protrude.

No external slide stop or manual safety exist. You must have a magazine inserted to fire the gun, and to lock back the slide. This makes locking back the slide somewhat of an annoyance at the least.

The frame also features a removable but non-reversible belt clip affixed to the upper right rear of the frame with two allen screws. Beneath the clip is the key hole for the Taurus safety lock. Two keys come with the gun.

The gun’s gripping area curves outward to its right to follow the contour of your body at waist level. This curve limits the gun to only a right-hand draw. 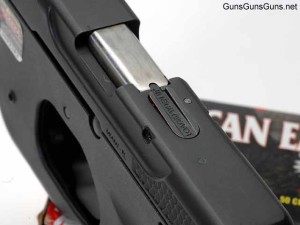 The loaded chamber indicator pops up when a round is chambered.

The front strap and back strap feature molded stippling. The frame’s upper-left features a horizontally dished-out area that serves as a thumb rest. Near the muzzle at the top of the frame on the right is a circular dished area you can place your trigger finger on until you’re ready to fire. Just below and slightly to the rear of this finger rest is the laser/light operating switch. This oval switch requires a forward push to turn the laser on, off or to choose one of three settings: dual white lights only, laser only or lights and laser. The unit automatically shuts off after 5 or 6 minutes to prolong battery life, and the switch is inset into the frame to help prevent inadvertent operation. 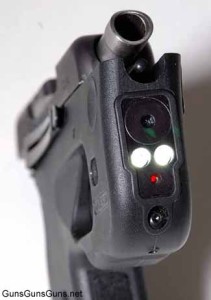 You can get the Curved with integral lights and a laser.

The bottom of the dust cover includes a shallow relief cut for a support-hand finger, which, along with high cuts on the backstrap and the trigger guard’s bottom rear, allows a high grip. The rounded and curved solid trigger occupies about half the space in the trigger guard. The trigger’s is enlarged somewhat akin to a trigger stop, but it’s not wider than the trigger guard.

You disassemble the Curve by removing the single large-headed cross pin from the left side. A non-marring and thin-edged tool is best for this, and it removes easily. The assembly then comes off forward. Compress the closed-ended dual recoil spring on its guide rod to remove it and drop the barrel down and rearward from the ejection port.

To remove the magazine, you squeeze the button on the magazine’s (and grip’s) left, and pull it out. A spare magazine comes in the also-curved and orange polymer box, along with the very necessary Owner’s Manual. 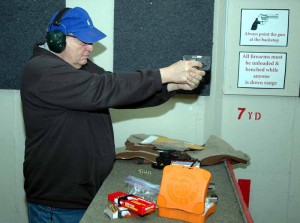 Usually range efforts with this genre of pocket pistol prove similar, but not with the Curve. Irv Gill and I started off and were quickly joined by two other club members who agreed to help us shoot the pistol. It’s not much of an exaggeration to say they all were quite taken with the gun, so much so they shot all the ammo (more than 200 rounds) Gill and I had brought!

Gill supplied jacketed hollow-point reloads, which I declined to shoot because this would void the warranty and could possibly damage the gun. The chances of damage occurring were quite remote, of course—I’ve used his reloads for more than a decade and never had a problem. But as a rule, I don’t shoot handloads at all for test and eval. 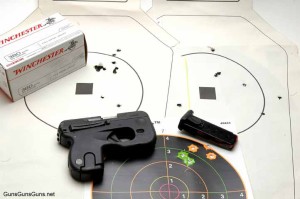 However, the group was so enamored with the Curve that they found the box of reloads and shot them, too, along with Winchester (White Box) 95-gr. JRN and Federal American Eagle 95-gr. JRN ammo, plus some loose factory hollow-point rounds in the ammo bag.

All the above ammo fired without a problem with one exception, which was light primer hits with three factory Winchester loads. All three fired the second time with the same shooter. He opined that because he was very deliberate and slow pulling the trigger in his quest for accuracy, this might have been the cause of the light strikes. My thought was I didn’t lube the gun before shooting it, so it was bone dry out of the box and we had shot over 150 rounds. I suspect firing residue interfered with barrel lock-up. Because the misfires fired the second time and we suffered no other misfires, even with his trigger pull, it lends credence to the residue flaking off of wherever it was. 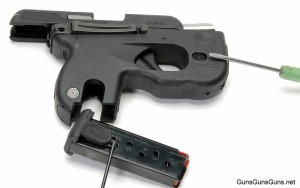 Note the light/laser activation switch, and the magazine release button.

Regarding the “sights,” for me the very small Loaded Chamber Indicator sight was a fuzzy blur. The others either used that sight only to verify their alignment of the gun because they were using the top of the slide for sighting, or simply ignored the device. Only one shooter used the crosshair lines on the slide’s rear for the same reason.

The shooters all went to the laser after a few rounds because they found they then shot much more accurately. They also all agreed pointing was all they needed to get good hits on a reduced-size IDPA Warren Tactical target at 7 yards.

I asked for impressions, which are as follows. First, no one found recoil uncomfortable at all; indeed, two thought it mild. One thought the Curve would be a good gun for his quite recoil-sensitive wife. 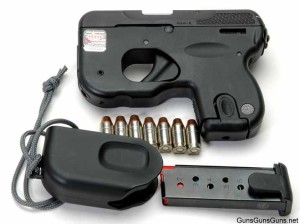 The Curve with its trigger protector/holster.

They all thought the trigger pull was fine and were impressed by the gun’s accuracy, particularly when using the laser. The test and eval sort of broke down after they familiarized themselves with using the laser. They wanted only to shoot smaller and smaller five-shot groups, which they did. They all shot standing, using two hands. I shot seated, using two hands, and did not shoot the smallest group. The shooter noted earlier who staged the trigger did, achieving a .5″, five-shot group standing using both hands, which by far was the best group of the day.

One shooter observed that due to the pistol’s shape and well-rounded edges, if you carried it in a pocket, any bulging most likely would be attributed to a wallet. He also said these same features would also make it easy to draw from a pocket. When I told them its MSRP ($392), they all thought it would have been higher because of the inclusion of the built-in light/laser. 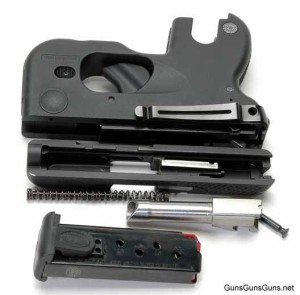 The supplied polymer trigger protector/holster is novel, but it requires caution because using it tends to place at least one of your hands is near the gun’s muzzle. Before doing anything else, I would remove the magazine when inserting or removing the gun from the trigger protector so that the gun is on safe. The exception: when the protector’s cord is attached to your person and you need to draw the gun quickly (as suggested in the owner’s manual). I found that by bringing the protector up from beneath the gun I could snap it right on, and that pulling the cord down and to the rear removes it easily without placing my hands forward of the muzzle.

Finally, here are my chrono results in five-shot averages, which I obtained using a Pro Chrony chronograph. I shot at 300 feet above sea level with an ambient temperature of 50 degrees F:

You can see the curved frame in this front-on view.

So what to make of the new Taurus Curve? At the least it’s a novel design and offers some nice features. It shoots well and is more than accurate enough for self defense. Its design shows Taurus gave much thought to ergonomics and comfortable concealed carry.

Still, the Curve also includes features not found on other pocket pistols, and a die-hard traditionalist might not care for them. Only time and the market will tell.