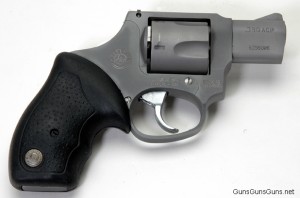 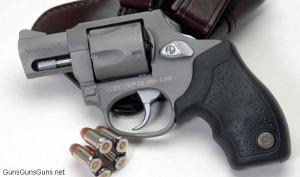 The new Taurus Mini Revolver 380 Ultra-Lite combines a legacy handgun action with a semiauto pistol caliber. The 380 is a close relative of the Taurus 905 revolver, which is chambered in 9mm. Taurus sent me a Mini Revolver to T&E, and I’ve written up my results below.

The Details
I once tested the 905 but no longer have it. That said, in handling the Mini Revolver, I get the impression the gun is somewhat slimmer in barrel and cylinder thickness. I also stuffed the gun in the same Del Fatti IWB holster I used when testing the 905 and now the gun-to-holster fit seems somewhat less restricting. In any event, the Mini Revolver’s official weight comes in at 15.5 oz., and my sample hits right on the 15 oz. mark.

The Mini Revolver is a five-shot, double-action-only revolver with 1.75″ barrel. A hand-filling, rubber, finger-groove grip encircles the round butt frame. The cross pin in the frame, which helps keep the grip from shifting, isn’t centered in the lower frame as you see in S&W revolvers. So, if you want to change the grip, you’ll need to figure out a workaround to use S&W grips.

The Mini Revolver has decent sights, uncommon with small-frame centerfire revolvers. It sports an integral ramped and serrated front sight, and the rear sight is a flat, black, smooth-faced metal blade that fits in a cut in the top strap. This sight is adjustable for windage by moving it in its slot using a very small slotted screw at the top right side of the frame. Such an adjustment is easy—if you have a very small screwdriver. Fortunately, my friend Ted Murphy (who was along to help) had one, saving me the embarrassment of using a knife point to do the adjustment and no doubt marring the gun’s finish in the process. 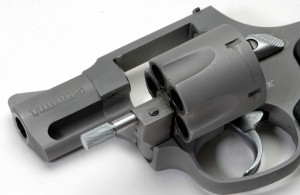 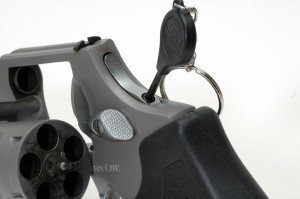 The trigger is smooth-faced and rounded, but its rear edges are abrupt. Not sharp, mind you, but with the slow trigger pulling needed for accuracy work, this became uncomfortable.

As noted above, the Mini Revolver is double-action-only, but it does feature an exposed hammer. However, Taurus has eliminated the single-action capability by removing the hammer spur. To the good, the body is contoured and polished such that its shape follows the curved lines of the top rear of the frame. This all makes Mini Revolver’s outline just that much smaller, with no hammer spur to catch on anything.

The unobtrusive Taurus Key Lock Safety is located in the lower rear of the hammer body. Taurus provides two hexagonal safety keys. Turning the key 180 degrees to the right (with the gun muzzle pointed away from you, of course) locks the firing mechanism but still allows opening the cylinder for loading, unloading and cleaning.

The fluted cylinder releases and moves easily on its crane when the thoughtfully-shaped and checkered cylinder latch is pushed forward. I particularly appreciate the lack of sharp edges on the latch because I invariably get nicked on my right-hand thumb due to recoil when firing a revolver of this size if it’s chambered for anything above .22 LR. To load the Mini Revolver, you insert five cartridges into the Taurus Stellar moon clip and load the package into the swing-out cylinder.

Read the Manual!
Reading the instruction manual should be mandatory for anyone who buys a gun. Sometimes it contains some critical but easily overlooked tidbits that will directly affect you or your new purchase. Example:Taurus warns that any attempt at removing the barrel from the frame will damage both. If you need to remove it, return the gun to the Taurus Customer Service Department following the provided return instructions. 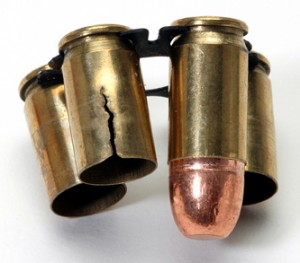 Note how the bullet has pulled forward past its shoulder due to the recoil from firing other rounds. (The cracked case is due to faulty ammo.)

Another example: Taurus states the gun is built to withstand the regular use of +P jacketed (emphasis added) ammunition. Taurus does not recommend using +P ammo loaded with lead bullets because the case-neck tension on jacketed ammunition intended for use in semiautos is not tight enough to prevent the soft lead unfired bullets from becoming unseated and moving forward in their case when shooters fire multiple rounds. This jarring can move the lead bullet enough that it protrudes from the cylinder face. This then stops the cylinder from turning and causes difficulty in opening the cylinder.

Finally, the manual provides advice on what not to use for cleaning a handgun that has titanium in its construct, as does the Mini Revolver. The instruction booklet states that while normal care and cleaning procedures can be used, under no circumstances should you use any abrasive material to clean the front face of the cylinder or any other part of the revolver (emphasis added). The use of such an abrasive material can remove the gun’s finish, which is a protective layer. This can greatly reduce service life of the cylinder and the revolver. (Note: My pistol sports a matte-stainless finish; blue is also available.)

For those who don’t like the black rings that form on the cylinder face, with this revolver, you’d best learn to live with them. Think of them as a small price to pay for the weight loss derived from using titanium.

Range Report
At the range, accompanied by Murphy and AJ Stuart, and later by Bill Cassidy and Bill Beradelli, we did the zeroing. The rear sight needed only four clicks left windage to hit dead-on at 10 yards for most of the ammo tested. I think point of impact did vary slightly with different bullet weights, but no more than an inch or so, even at 15 yards. This observation is questionable, though, for despite having all the above-noted help, we all quickly got tired (and bored) attempting to shoot nice groups with the 15-lb. double-action trigger pull.

The consensus: The gun was more-than-okay to shoot and shoot well and get good hits on man-sized threats at 10 and 15 yards, with mostly good center hits. Cassidy opined he was quite taken by the little gun and said he considered buying one. Beradelli just busied himself shooting nice groups, while Stuart and Murphy recovered from the chrono work. They used a Master Chrony chronograph 300 feet above sea level with an ambient temperature of 60 degrees. They obtained these results with two five-shot averages:

Why does the gun feature such a heavy trigger pull? My best guess: Using a moon clip to hold the rounds cushions the hammer/firing pin strike somewhat, and the spur-less hammer is lighter than normal. Plus, the Mini Revolver has a frame-mounted firing pin (not hammer-mounted), which usually demands a heavier-than-traditional hammer blow. Taurus therefore correctly came down on the side of ensuring—as best as they could—that the user gets a “bang,” not a “click.”

Final Thoughts
There are pros and cons regarding the effectiveness of the .380 ACP cartridge for self defense, but many knowledgeable gun people are comfortable with it. Of course, the same can be said for using a revolver at all, and a snub-nose one at that. Weight, size and reduced recoil are driving forces. Just having one caliber also keeps life simple. If you already have a .380 semiauto, a revolver in matching caliber makes sense if someone else in your household isn’t able or disposed to learn the manual of arms necessary to effectively use the semiauto.

Other advantages also come into play, such as where laws or personal preference require storing your ammunition and gun separately. A standard revolver requires either fumbling around for loose rounds or digging them out of the box to then individually load them into the gun. With a full moon clip, this fumbling is minimized. Just grab the gun and full clip. With just slight fiddling with clip and cylinder, the gun is quickly loaded and you’re good to go. And of course, not everyone has the strength to control the recoil of cartridges more powerful than .380 ACP.

The Mini Revolver’s heavy trigger pull is a negative, and in my experience there’s no effective gunsmithing work-around. The best you can do here is consider using both hands on the gun, with both forefingers on the trigger. As a bonus, this will give you better gun control for shooting and protecting the gun from being taken away in a struggle. 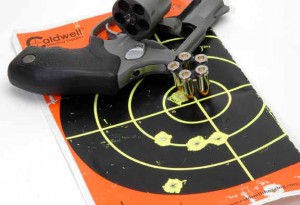 With all these things considered, though, the Taurus Mini-Revolver is worth a long look.