Summary: The description, specs, photos and MSRP for the USFA Bisley revolver.

In 1895, Holland & Holland advertised the new Colt Bisley revolver. The town of Bisley, England, was the site of major British shooting matches. In 1894 Colt made an effort to market this new revolver, which was an outgrowth of the modifications urged by popular demand on the Single Action revolver. Longer grip straps, a heavier frame, a lower and wider hammer spur, and a full-width trigger all were incorporated into this new design in 1894. 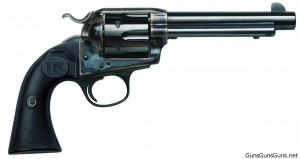 The last Bisley, Serial Number 330,184 left the factory Nov. 18th, 1919, but USFA is now reproducing this revolver. Built on either a cross-pin, special Bisley frame or a target frame, USFA’s Bisley is available in a wide variety of calibers and barrel lengths (see The Specs below). It features hard-rubber U.S. grips, a square-notch rear sight and a square front blade sight. It’s finished in Bone Case and Dome blue, Bone Case and Armory blue, or nickel.