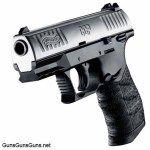 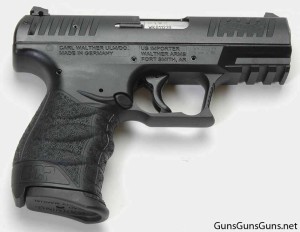 The author’s CCP from the right.

News of Walther‘s new polymer-framed 9mm compact pistol, the CCP, leaked out last year (“CCP” stands for Concealed Carry Pistol), and user and expert reviews began appearing soon after. I obtained a CCP from Walther this summer for testing and evaluation, and my review follows.

The Details
The CCP features Walther’s SOFTCOIL gas-delayed blowback system. This system directs the gas pressure produced by a fired round into and through a small port forward of the barrel chamber, where it then moves into a cylinder beneath the barrel. The cylinder contains a piston whose movement (from the aforementioned gas pressure) slightly retards slide movement until the pressure declines after the bullet leaves the barrel. Then the slide functions normally. The cylinder is pinned beneath the muzzle opening.

The single-action CCP weighs 22.24 oz., and it’s barrel measures of 3.54″ long. Overall, the gun measures 6.41″ long, 5.12″ tall and 1.18″ wide. Walther says the trigger pull weight measures 5.5 lbs (however, determining the pull weight of my sample proved problematic—more on this below). 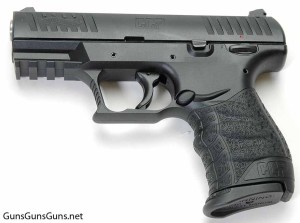 The author’s CCP from the left.

The CCP’s owner’s manual cautions against high-pressure loads: “… +P ammo generates more gas pressure, which can affect wear characteristics or exceed margins of safety. Use of +P ammunition may require more frequent service. +P+ ammunition is not recommended for use in Walther firearms … and could be DANGEROUS.” (Note: emphasis in original—ed.).

Two single-column, eight-round metal magazines come with the gun. The follower is also metal, while the removable base plate is polymer. The magazine features seven index holes on the right that to me resemble the outline of a pointed bullet. On the magazine’s upper curved surface, there’s a cutout and flattened piece of metal bent outward to capture the reversible magazine catch.

The slide is stainless steel, and Walther offers two finishes: a brush finish, and a black Cerakote finish. The polymer frame is black in both versions. The slide features six diagonal grasping grooves front and rear, and the slide’s left side is marked WALTHER and CCP. 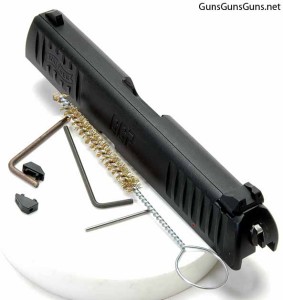 The CCP’s sights and tools.

The slide carries polymer front and rear sights with a three-white-dot setup. The rear of the front sight is slightly ramped, and the rear sight is also ramped, but up front. The front sight is adjustable in that Walther supplies three front sights of different heights. The three sights are numbered 1, 2 and 3, with number 1 installed. Removing the front sight requires removing its retaining Torx screw from inside the slide using the supplied allen key. Another, larger-diameter allen key also comes with the gun for adjusting the rear sight for windage. The owner’s manual provides detailed written and pictorial instructions for these procedures, along with disassembly and re-assembly directions. I highly recommend reading and re-reading these sections a few times before altering your sights because it’s complicated.

The striker-fired CCP employs a passive firing pin drop safety and a manual safety. The manual safety is a thin tab on the frame’s upper left rear. Up is “On,” and down is “Off.” Moving to the Off position exposes a red dot on the slide, which indicates you can fire the gun. The passive safety moves as you pull the trigger. In the center rear of the large ejection port is a notch that serves as a loaded chamber indicator. A spring-powered extractor is centered on the ejection port’s right side. 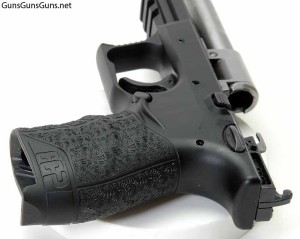 The slide stop, reversible magazine catch and manual safety are easy to reach.

The CCP polymer frame holds the permanently-pinned barrel and the lower portion of its firing system. The dust cover includes a MIL-STD 1913 picatinny rail for mounting accessories such as a light or laser. The horizontally-grooved slide stop is slightly recessed into the slide and is easy to use, as is the aforementioned manual safety.

The frame, like some of Walther’s other handguns, features an ergonomic grip that includes a unique non-slip surface, complete with bashful finger grooves on the frontstrap. The ample trigger guard is horizontally-grooved on its face, while the curved and rounded trigger features horizontal grooves. 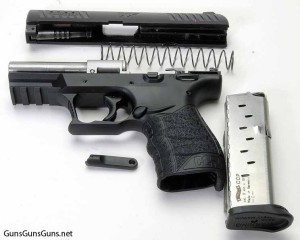 The CCP disassembled. Scroll down to the bottom for more disassembly photos.

You remove the gas system from the frame by driving out its retaining pin with the supplied drift punch. Walther supplies a brass bristle brush on a rod to clean its interior.

Note: Walther says you shouldn’t remove the striker. At one point when reassembling the pistol, I brushed out some firing debris inside the slide, which dislodged the striker spring and sent it flying into parts unknown. Fortunately, by then I had finished all the live fire.

Prior to the flying striker incident, I had asked my friend Irv Gill to read the instructions and do the disassembly. I wanted to see if it was me or a larger issue. On his first successful effort, it took Gill 5 minutes, but on his second successful effort, it took only a minute. It’s somewhat quirky, it would appear, and you either get it or you don’t. Apparently that wasn’t my day to get it!

You reassemble the CCP in reverse order. This too is complicated. Again: I strongly recommend you take the time to read the owner’s manual and thoroughly understand the entire disassembly and reassembly processes before attempting them. (Note: see more disassembly photos at the bottom of this article.—ed.) 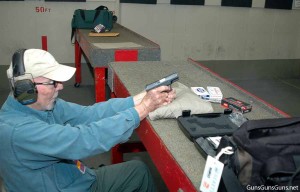 The author fires the CCP.

Range Report
I met with Gill and Mike Cosintino at the Lower Providence Rod and Gun Club Range in Oaks, Pa., to perform the range work. The evaluation began well, as we all liked the fit of the gun in our hands and took note of its effective gripping surfaces. This only lasted until the first few shots, however, because my sample CCP featured a very poor trigger pull. My two associates agreed. The trigger varied as each shooter pulled it, and it felt as though it was moving over sand. In order to obtain decent hits, we needed to quickly pull the trigger. No taking your time to line up the shot here!

Shooting at 15 yards seated at the shooting bench, we all failed to get any consistent hits due to the gritty trigger. All we achieved were close patterns. The best of these I made after more than a few rounds of trying. I placed four rounds in 2.75″, and then a fifth that pushed the group to 3.75″. Again, the quicker the trigger pull, the better the hits.

As mentioned above, Walther’s specifications call for a 5.5 lb. pull weight. I failed to obtain any confident readings due to the “sand,” but it does feel like 5+ lbs. 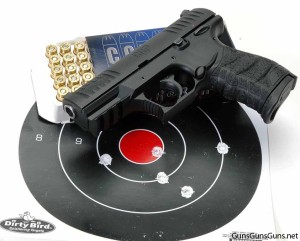 The author’s best target results with the CCP.

I think I isolated the cause of the poor trigger. With the slide is off, the glitches disappeared. I then saw that when the slide is on the gun, a vertical, rounded-top pin in the frame (that actuates the drop safety feature) was bearing against the draw bar, which is attached to the trigger. When I held the draw bar away from the pin, the gritty trigger disappeared. (The owner’s manual doesn’t include a schematic of the gun nor a parts identification list, hence this somewhat vague description.) It looks as though either or both parts need polishing or replacing. I tried oil and then grease, but they didn’t help. I could have attempted to polish either or both parts, but I didn’t because the gun wasn’t mine. More importantly, I’m not a gunsmith. Just ask my gunsmith!

The CCP functioned well shooting Cor-Bon, Remington and Winchester ammo. I fired it over a Pro-Chrony chronograph at 55 degrees Fahrenheit and 300 feet above sea level to obtain these results:

Gas-delayed blowback systems typically reduce recoil. My sample CCP delivered brisk felt recoil, but what I thought to be a reasonable amount of barrel lift for this handgun category.

Trigger Tip
If your dealer allows you to pull triggers on new guns before sale, by all means do so. I didn’t do this when I picked up this sample gun, but in self defense the store and counter personnel were quite busy. My FFL holder—Rogers Better Bullets in King of Prussia, Pa.—does me a huge favor in handling my transfers, so I try not to be pushy, especially when they’re busy.

Final Thoughts
The CCP is neither a pocket nor duty pistol. It’s designed for concealed carry, and for that purpose, to paraphrase “Goldilocks and the Three Bears,” the CCP is not too large, not too small, it’s just (about) right.

And with a good trigger, I’d give the CCP a decent rating because it would make an effective arm for concealed carry self defense. However, the poor trigger on my sample CCP requires a poor rating.

It’s possible the trigger on this sample was an outlier (though Google searches suggest others have received similar triggers). I’m surprised, because I’ve had exposure to some of Walther’s other current handguns, including the PPK, SSP, PPX, SSP, PP M2 and outstanding PPQ M2, and I found all of them featured trigger pulls ranging from good to great.

But with the CCP’s trigger, we’ll just have to wait and see. At the least, if you do get a bad trigger, I suspect Walther USA would be more then willing to correct it. 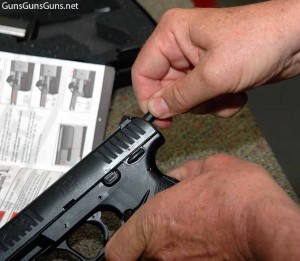 Using the take-down tool on the CCP. 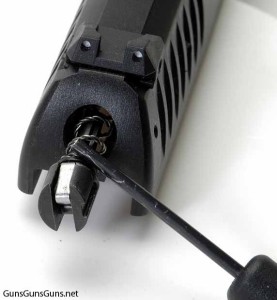 The CCP’s locking catch hook, which holds the striker spring. 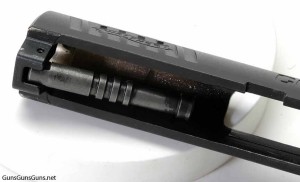 The CCP’s SOFTCOIL cylinder with gas piston is pinned to the front of the slide.