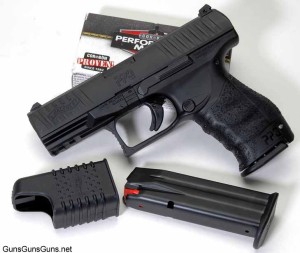 The author’s PPQ M2 from the left.

The PPQ M2 differs from the modern PP in trigger function where, after you load the chamber, it features a “constant trigger pull” (Walther’s terminology). Translated, this means its striker is fully cocked. The PPQ M2 lacks a double-action mode.

The author’s PPQ from the right.

The slightly ramped and grooved front sight and the square-notch rear sight employ the three white-dot system. The front sight is elevation-adjustable by using replacement sights of varying heights, which are an optional purchase. You adjust for windage on the rear sight via the click-adjustable, slotted right-side-mounted screw in its base. Walther provides removal instructions in the very-thorough instruction manual. 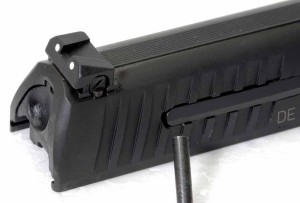 The author points out the extractor.

The top of the slide is longitudinally grooved between front and rear sight. Forward-leaning and widely-spaced grasping grooves are front and rear on the slide. The wide spacing helps keep the usually-narrow grooves from abrading clothing and holsters, or collecting debris.

A spring-loaded and beefy extractor is located at the center right rear of the large ejection port. When the chamber is loaded, the rear of the extractor is depressed into the slide, exposing a red rectangle. These, then, provide visual and tactile notice of the chamber’s status.

Internally, the slide contains the barrel and recoil spring. The latter is captive on a polymer guide rod. The rear end cap is colored blue, and the front end cap is rounded and black. A passive firing pin safety is located just to the rear of the breech face.

The cartridge pick-up rail is stepped, with a narrow rail on the top right side of its larger body. I think this helps prevent the rail tip from striking a live primer when unloading or when clearing malfunctions. This thinner part is also beveled on its top and outboard area. Certainly worthwhile!

The polymer frame features finger grooves on its front strap and a rather unique combination of half-circle ridges and raised dots afford a solid but not grabby surface treatment in the normal gripping areas, including the changeable backstrap. Three backstraps come with the gun: small, medium and large. The medium size comes pre-installed. One shooter made mention of how high a grip he could take thanks to the shape of the medium backstrap. The largest backstrap also extends up to the top of the frame.The magazine catch sports a grooved head is located at the left rear of the trigger guard. It’s reversible, with detailed instructions for doing so in the manual. The catch is partially protected from accidental depression by a molded ridge extending rearward on either side of the frame. The ridge can also serve as a thumb rest. This standard magazine catch differs from the paddle type found on the original PPQ.

To change from one to another, you drive out the roll pin, which is at the lower rear of the grip. (Because this is a roll pin, make sure you use a proper-size roll pin punch.) The backstraps are notched at their bottom rear, which allows the retaining pin to also serve as an attaching point for a lanyard. The base of the backstrap overhangs the magazine, providing an aid to inserting the magazine.

Removing the backstrap insert disclosed an open and raised slot on the inner wall of the frame. Marked on the left side of the slot is “Transponder,” and on the right side is “Kennung”—translated, this means “identifier.” The slot appears designed to hold a computer card that provides location, inventory and loss-prevention identification.

The ample-sized trigger guard has a vertical (i.e., squared off) front face that’s horizontally grooved for those who favor using the guard with their two-handed grip. The curved and smooth-faced trigger has an also-curved center part, which is one of two drop safeties. The other is within the slide and prevents the firing pin from snapping forward if you drop the gun on its forward face. A projection on the trigger bar neutralizes this when you completely pull the trigger.

The dust cover features a Mil-Std 1913 picatinny rail on which I easily installed and removed SureFire and ITI lights, along with a Lasermax laser.

The long, ambidextrous slide stop lever is grooved for two-thirds of its length, including the projecting portion. Forward of this is the takedown cross bar (more on this in disassembly, below). The pistol is serial numbered on the slide, barrel and at the top rear of the frame. This last number is on the metal body containing the trigger and other parts of the operating system. It’s visible through a window in the frame.

Two metal-body 15-round magazines featuring orange-colored polymer followers and black polymer removable base plates came with my PPQ M2, along with a sturdy magazine loader. Cartridge witness holes numbered “4” to “15” are on the rear wall of the magazine body. Although the instruction manual mentions a +2 base plate, it isn’t listed on the Walther USA website.

Disassembly of the PPQ M2 is simple and follows that of similar polymer handguns. After ensuring the pistol is empty, dry fire it, then push or pull down the ample and grooved take-down latch. While holding it in this position, push the slide forward and off of the frame rails. Compress the captive recoil spring and remove it. Then you can lift the barrel out and to the rear of the slide. Re-assemble in reverse order.

In my range work, with three other shooters also on the gun, the PPQ M2 was simply a pleasure to shoot. For me it’s a comfortable pistol to hold, manipulate and shoot. Curiously, this time the white dot sights didn’t interfere with my precision shooting. I usually black them out but didn’t have to this time.

The Walther PPQ M2 lacks any annoying sharp edges and is simple to operate. And with the gripping area designed as it is, the gun’s feel ranks second to none. In fact, one of the shooters commented, “My hand seems to naturally take a good shooting grip.”

How does the PPQ M2’s trigger pull perform? Walther certainly understates the effect, saying “… make(s) it very easy to shoot accurately.” Trigger movement is short after initial take-up, as is the striker re-set for the next shot. After the initial shot, the press-to-bang movement is really short! Using a Chatillon trigger pull gauge, my sample’s trigger pull weight measures a shade over 5 lbs., close to what the Walther specifications call for (5.6 lbs). In face, the single-action striker trigger is close to—if not the best of—any of the striker-fired triggers I’ve pressed. Two of my helpers, who are top-rated in action shooting competitions, agree.

The author sends a 9mm round downrange with his PPQ M2.

The PPQ M2 is also one accurate pistol. We all shot great groups. Referring to the trigger pull, one asked, “Is that out of the box?” The other noted, “Great trigger!” and “This gun can shoot!” My first five shots using 147-grain JFP Corbon Performance Match ammo placed three rounds in a 1″ ragged hole, with the last two making it a final +/- 1.5″ five-shot cluster, similar to the factory test-fire target that came with the gun.

Using the same ammo, one of the guys shot a fist-sized cluster in the head box of a Warren IDPA Tactical Training Target, one-handed and standing. The other shooter duplicated this using 115-grain JRN Remington training ammo, but used two hands to do so.

Oh, we also fired three types of ammo over a Pro-Chrony chronograph in five shot groups at 55 degrees F, 300 feet above sea level. The results:

If the PPQ M2 lies within an organization’s or your personal requirements and limits, with an MSRP ranging from $599–$699, it’s worth a long, hard look. As a new model, albeit developed from the well-tested and accepted P99, it lacks extensive end-user testing and abuse, but from what I experienced, the PPQ M2 will prove more than satisfactory. 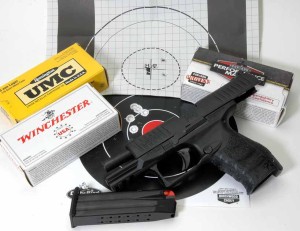 The factory’s (top) and author’s (bottom) target results with the PPQ M2.

Walt Rauch received a BS degree from Carnegie Tech and completed service as a Special Agent in U.S. Army Intelligence. Rauch was a U.S. Secret Service Special Agent and a Philadelphia, Pa., Warrant Unit Investigator. He now operates a consulting company for defense-weapon and tactical training. Rauch & Company services include expert witness testimony on firearms use and tactics.
Rauch is also a writer and lecturer in the firearms field. He’s published in national and international publications including InterMedia’s Handguns, several Harris Publications specialty magazines, Police and Security News and Cibles (France). He is the author of a book on self-defense, Real-World Survival! What Has Worked For Me, as well as Practically Speaking, a comprehensive guide to IDPA defensive pistol shooting. 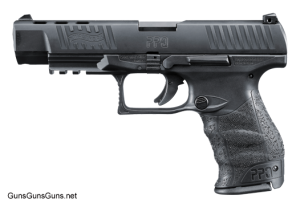