Rating: 7.0/10.
Users’ Rating (Click a star to rate this gun.)
Rating: 7.7/10. From 140 votes.
Please wait...
Summary: Dave Spaulding’s review of and rating for the Walther PPS pistols, including a range report, Walther’s specs, MSRP and photo, and user ratings and comments. (Click here to see all Spaulding’s gun reviews.)

The Walther PPS (Police Pistol Slim) is a very compact, polymer-frame, semiauto available in both 9mm and .40 SW, a serious step up in power from Walther’s earlier hideout handguns. Similar in size to the PPK, the PPS keeps its weight low by employing a polymer frame. 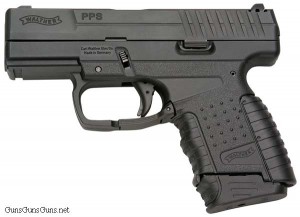 The PPS from the left.

Depending on which magazine you use, the 9mm comes with a capacity of six, seven or eight rounds, and the .40 SW offers one less round for each magazine. Like the Walther P99, the PPS uses a pre-cocked, striker-fired system that reduces the number of parts used, making the gun simpler to disassemble and maintain.

One noteworthy feature: Removing the backstrap will render the pistol inoperable for safe storage and also offers a different grip configuration for different size hands. While disassembling the PPS, Walther suggests removing the backstrap instead of pressing the trigger to release the action, which would certainly eliminate any involuntary discharge.

But what really sets the gun apart from similar models is its trim profile. With a width of just 1″ at the slide-stop lever (its widest point) the PPS is quite slim. The 3.25″ barrel keeps the gun to an overall length of just over 6″. The PPS weighs just 19 oz., so the gun will be very easy to carry for long periods of time.

The three magazines offer not only different capacities but add to the length of the PPS grip frame. The six-round magazine sits flush with the bottom of the grip. The seven-round magazine offers a small pinky rest reminiscent of the classic PPK. The eight-round version has an even bigger floor plate that will probably prove popular among those with large hands.

Many shooters can make the speed load look easy, but there’s a large amount of practice behind a quick magazine exchange, especially when using a slim single-stack magazine. Precise alignment is necessary, and any movement on the part of the gun or magazine hand will mess up the action. Having a pinky finger hanging out in space complicates this, as does pinching the hand between the magazine and grip frame as it slams home.

These drawbacks can be overcome, but it will take some practice, so understand the downsides of extreme compactness before buying. And don t underestimate the amount of control the pinky finger offers. While it’s true you hold the pistol in place with the middle finger, the ring and pinky fingers help cam the muzzle down during recoil.

As stated earlier, the PPS is a striker-fired gun, and it’s similar to the Glock in several ways. The trigger offers a safety lever in the middle of its face deactivates when you seat your trigger finger on it. The action is smooth with a bit of stack, and breaks at 6.5 lbs. The reset is short with a length of travel just under .5″. The PPS trigger action is easy to use, but it was a bit sluggish initially. Happily, after several hundred rounds, the gun smoothed out and ended up with a surprisingly good trigger. Not match grade, mind you, but very useable for a defensive firearm.

Accuracy was good from the beginning. I started my testing by shooting 3″ dots at 10 yards from an unsupported, two-hand stance. Both Hornady 124-grain XTP and Extreme Shock 115-grain Enhanced Penetration Rounds (EPR) grouped nicely.

I was feeling pretty good about the gun, so I moved back to 25 yards and attempted the same test. I was quite encouraged with the Extreme Shock rounds, placing seven rounds into the head region of a Riposte-1 silhouette target with five of the seven touching. The Hornady rounds also grouped well with a vertical line that measured 3″ long.

The three-dot sights that come standard on the PPS are very low profile but very visible. It helped that the sights, which consist of a trim front sight combined with a wide rear window, allowed me to get more target information around the front sight. The rear sight is dovetailed in place, and the front sight is held in place via a slotted screw you can access after removing the slide and barrel.

The PPS is equipped with an ambidextrous slide-release lever instead of a single side button. The lever is nicely blended into the contours of the trigger guard, making it quite snag resistant, but I found it difficult to release the magazine regardless of whether I used my thumb or index finger. In the end, I had to use my middle finger. Admittedly, I have very small hands. Those with normal to large hands and won t have this problem.

Like the P-99, the PPS features a rail on the dust cover for mounting short rail lights and lasers. The slide-stop lever is located at the rear of the frame and has a ridge around it to keep you from inadvertently engaging it.
The PPS field strips similar to a Glock: You must unload the gun and then disengage the trigger in order to remove the side assembly from the frame. Once the steel slide is removed, you can see the metal chassis that houses the internal components.

These parts appear robust and simple. The recoil spring and guide-rod assembly is a dual-spring design that helps reduce both felt recoil and continuous battering of the slide on the frame. The system works quite well, making the muzzle flip on the short-barreled PPS negligible. This system will be greatly appreciated in the .40 SW model, and they also make for a very reliable gun. The PPS worked flawlessly throughout 500 rounds of varied 9mm ammunition, including some old lead reloads I still had on hand.

In reality, I didn’t like the PPS initially, but after shooting the gun for an afternoon, it ended up being a very satisfying pistol. This is not the first time I’ve worked with a gun that required a break-in period.

The Walther PPS will make a large number of officers happy who currently carry a striker-fired duty gun and want something compact, light and thin to carry for backup or off duty. The PPS will be quite at home on the beat in a pocket or ankle rig, or tucked away under a light jacket or shirt while shopping at the mall with your significant other.