Its other features include:

In addition, the Vickers Elite includes a magazine with Vickers’ design elements. Its features include:

Each pistol features the Vickers Tactical logo on the slide. Wilson Combat says the only allowed upgrades include an ambidextrous safety, a choice of front sight and a deluxe hand-polish blued finish. 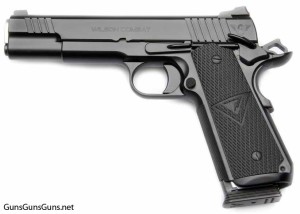 The Vickers Elite from the left.